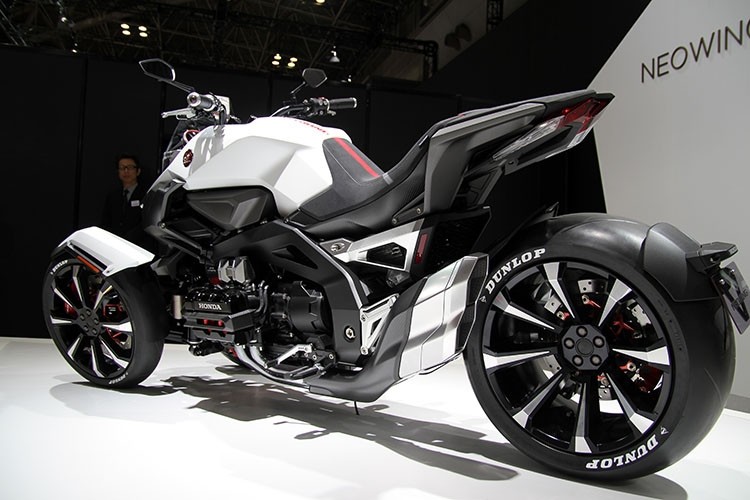 The Honda NEOWING made its official debut at the Tokyo Motor Show. It was quote the surprise being that Honda hasn’t uttered the work “trike” or “3 wheels” since the 1980’s when the ATC three wheelers were banned. That whole situation still baffles me to this day as they weren’t dangerous unlike the rider made them dangerous but we won’t go there haha.

Could the NEOWING be the predecessor of the Gold Wing in 2017 or 2018? Could this be the first Gold Wing’ish trike that a corner of the Wing market segment has been asking for?

If you’ve spent any amount of time around Gold Wing owners or possible Wing owners that are shopping you’ll find that there’s a substantial amount of them that don’t want two-wheels. They want the added “safety” of three-wheels or can’t hold up a motorcycle for one reason or another. Our Honda reps have told us for years that building a trike wasn’t on their radar. Could a reverse trike like the NEOWING be on their radar though? It looks like it is judging by this concept bike…

What would be the benefit of a major manufacturer producing a Gold Wing trike or similar with the NEOWING versus these aftermarket companies hacking up a Gold Wing to turn it into a trike? Safety. Handling. Reliability. The list goes on and on. Honda has the millions and millions of dollars $$ needed to produce one the right way and not by hacking up a current bike to do it halfway.

Honda trike versus Can Am Spyder etc… What makes the Honda setup different if they bring the NEOWING to production? An original Honda linkage mechanism on its front wheels. The front wheels feature Honda’s link structure and new technology in which an actuator mitigates roll, completing the layout that combines the mechanical appeal of a motorcycle. What does that mean? This Honda trike still leans like a real motorcycle unlike every other trike kit out there from Motocar, Lehman, California Side Car etc. It’s an unprecedented three-wheeled vehicle that offers the cornering feel and sporty ride equivalent to a large-sized motorcycle while providing excellent stability during low-speed maneuvers. 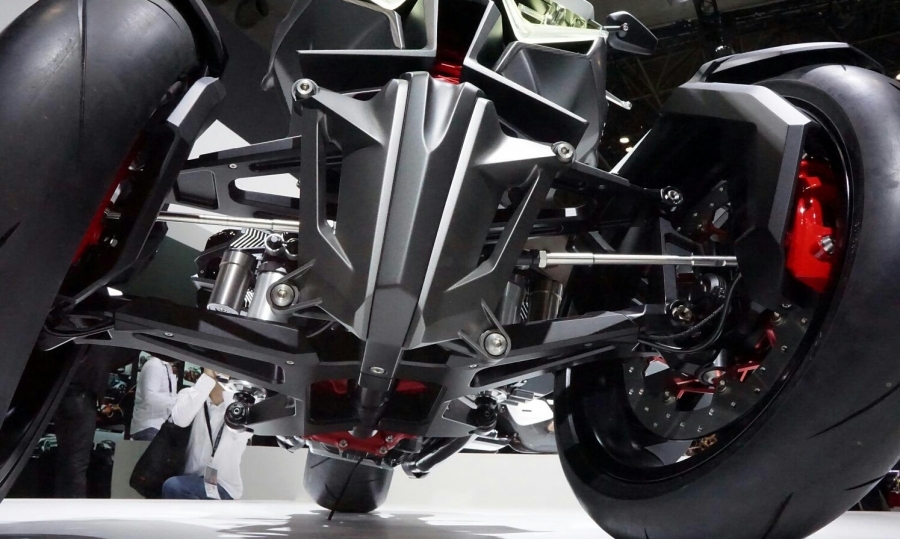 Delivering sporty, lean cruising with big bike-style cornering and a stable ride feel, this 3-wheel sport hybrid is like nothing before! The hybrid system comprises a horizontally opposed 4-cylinder gasoline engine (think back to GL1200 Gold Wing) with a low center of gravity and an electric motor, delivering powerful, torquey acceleration.

You have seen a similar setup used by Piaggio on their MP3 scooter. You may have seen a setup like the Piaggio scooter from Yamaha when they announced their Tricity scooter in April of 2015. Piaggio went to work quickly though and attacked Yamaha with its lawyers ending in a lawsuit claiming they copied the design.

Now, lets touch on Honda NEOWING engine specs / performance. Some may ask… If this could turn into a possible Gold Wing replacement, why would they downgrade the engine size? Larger engines don’t always mean more horsepower and smaller doesn’t necessarily mean less horsepower. Example: The twin cylinder engine in the latest 2016 Shadow 750 (v-twin engine) has 40 HP whereas the 2016 CTX700 (parallel-twin engine) has 46 HP. Even when the same engine is used, we can run into variables in horsepower. Example: The ST1300 (V4 engine) is packing 116 HP whereas the same V4 engine used in the CTX1300 (V4 engine) has 88 HP. That’s only a couple of horsepower shy of the Gold Wing 1832 cc opposing six-cylinder engine and we’re talking about losing 500 cc and two cylinders. Theoretically, the ICE engine in the NEOWING wouldn’t have the horsepower of the Gold Wing (six-cylinder engine). That’s where the awesome part of hybrid / electric technology that’s leaking down from Honda’s cars can make up the difference in power as well as make it even more fuel efficient. Pair that up with the DCT transmission and it’s amazing what kind of technology Honda is packing in these bikes! Honda is so confident with their new automatic motorcycle DCT transmissiom they are throwing it on more and more models year after year. To quickly name a few off a few of the 2016 motorcycles available with DCT – you’re looking at the NM4, NC700X, NC750X, CTX700N, CTX700, Africa Twin CRF1000L, Integra, NC750S and the list goes on and on. Honda hasn’t released any official nnumbers so those technical details are all speculation at this point.