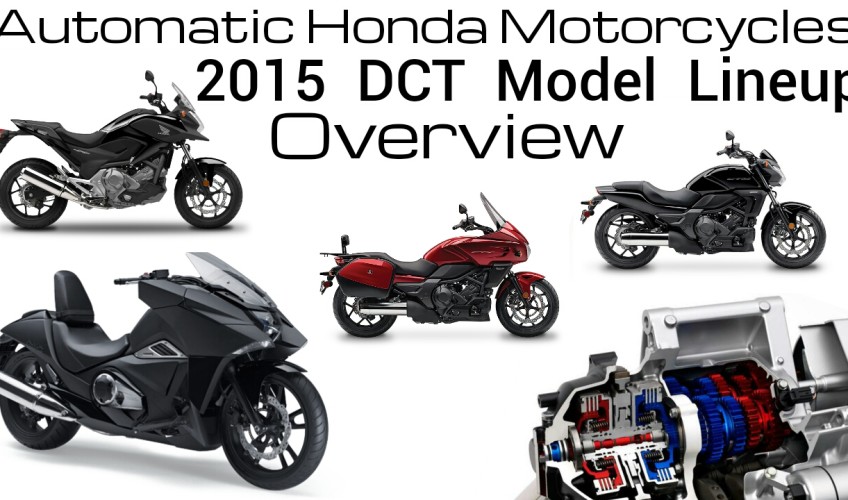 Looking for an Automatic Motorcycle? Don’t want a scooter? You’re not alone… Still to this day the term scooter is frowned upon in the motorcycle community. It’s truly an image thing though as scooters these days aren’t slow like they used to be and some can exceed 100 MPH all day long and outrun many motorcycles in a 0-60 competition or 1/4 mile drag race etc. Check out How to Ride a DCT Automatic Motorcycle and more details on how it works by Clicking Here.

To help with this problem and bring even more potential customers into the wonderful world of 2-wheels Honda has brought back Automatic Motorcycles. The last time this venture was explored dates back a few decades and to put it shortly – was a flop. Honda has decided to give it one more try and seems to be hitting the nail on the head this go-around. So much so that Honda not only makes one Automatic DCT Motorcycle but quite a few models.

The first model into this market segment this century dates back to 2009 with the Honda DN-01. The DN-01 start off on the right track at first though because of its off-the-wall styling and we also can’t forget that price with an MSRP of a whopping $15,599. That was a rather difficult pill to swallow for most… Especially considering a lot of the Automatic Motorcycle market was aimed at attracting first-time buyers that may have been scared by learning how to ride with a true manual transmission and operating a clutch. With it coming in at a price at what most people would pay for an automatic Civic the sales for the DN-01 were lacking. To put it nicely, us dealers referred to DN-01 as “Do Not – Order 1”.

This resulted in Honda putting large rebates on them and helping us clear out our inventory while they went back to the drawing board. In 2010 Honda also experimented with the all new VFR1200 and made an automatic DCT version of it. It was rather expensive though as the standard model had an MSRP / Price of $15,999 and the DCT model of the VFR came in at the tune of $17,499. History again repeated itself with the VFR1200 DCT model similar to the DN-01 and Honda had to put large rebates to help clean out dealer inventory.

Fast forward a couple years. Now we have multiple Automatic DCT Motorcycle models with pricing starting as low as $7,599 – which is less than half of what the original automatic DN-01 retailed at! 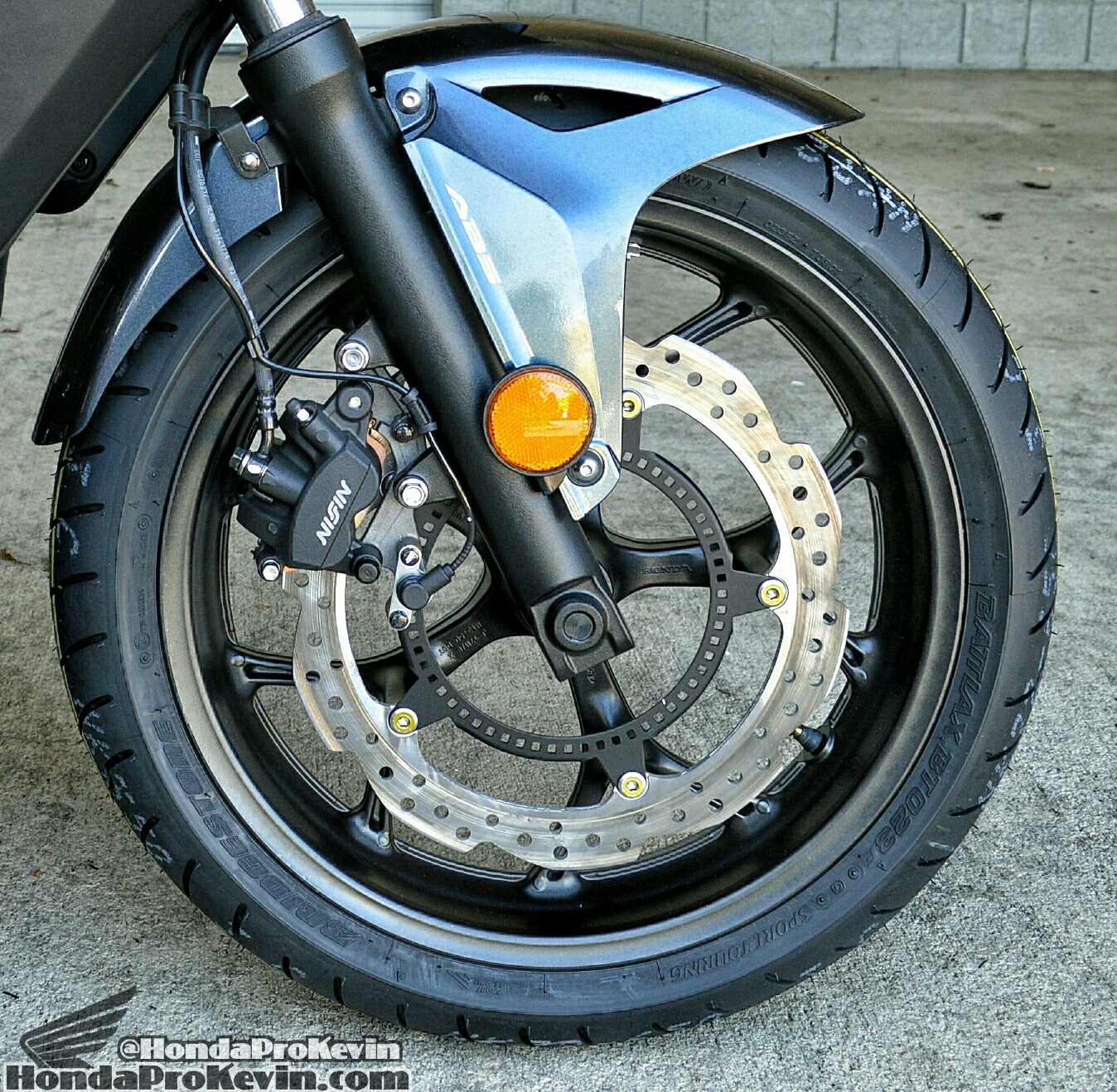 Before we get started. All DCT Automatic Motorcycles from Honda for 2015 also have an added safety feature of ABS (Anti-Lock Brakes). Typically ABS alone adds anywhere from $500-$1000 to a motorcycle in Honda’s model lineup. This shows how much bang for the buck you get when you see how small the added cost is to go with the DCT over a manual clutch and transmission model.

The CTX700 DCT model is classified under Touring models by Honda. This is due to the fact that it has a windshield / upper-fairing that it’s sibling CTX700N does not have. The detailed model ID from Honda refers to the CTX700 DCT as CTX700D and then you add an F at the end which designates it as a 2015 model (CTX700DF). The 2015 CTX700 DCT / ABS model has an MSRP / Price coming in at $8,099. If you opt for the manual clutch and transmission model it drops the MSRP / Price down to $7,599. 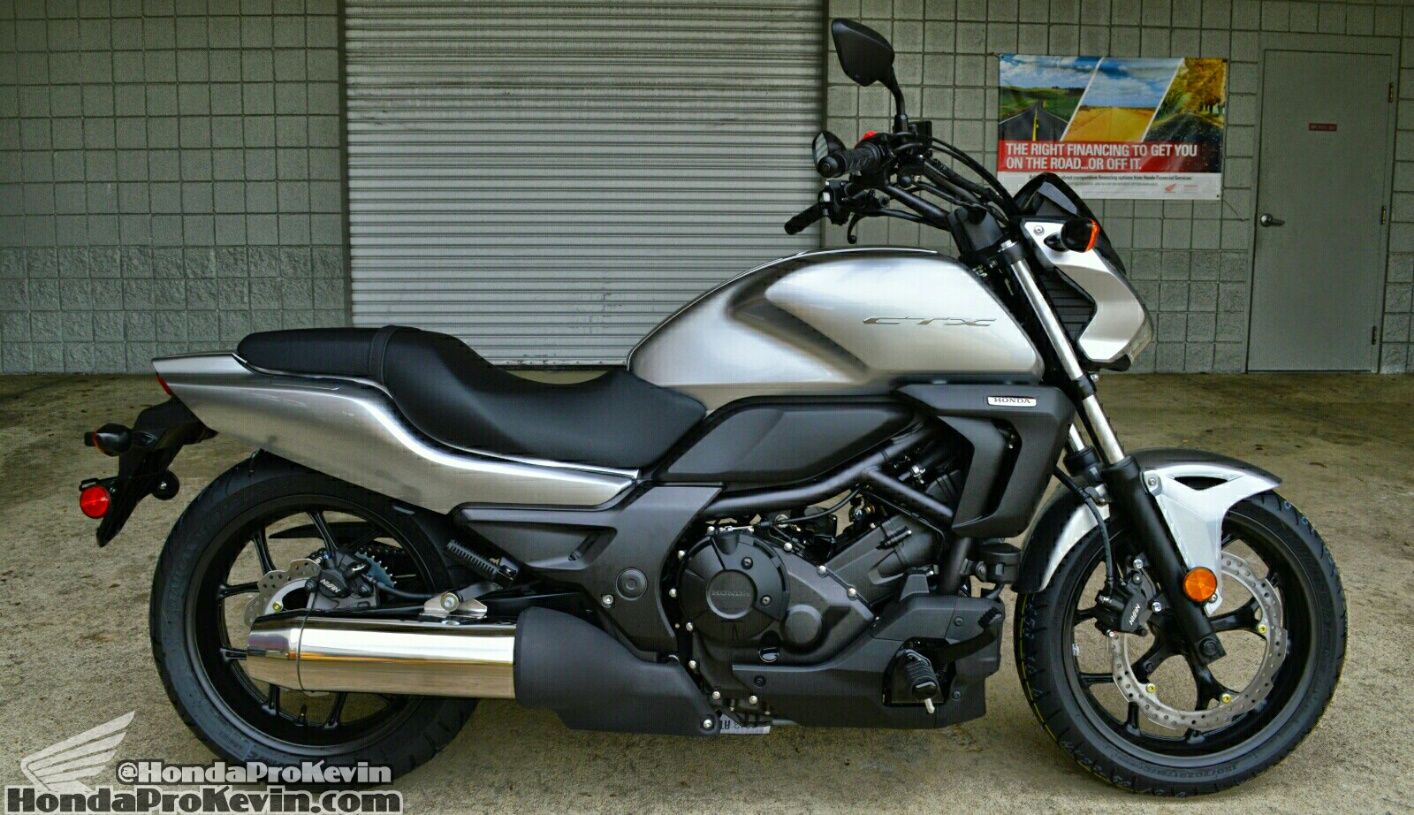 The CTX700N DCT model is lumped into the Cruiser category by Honda. This is because it does not have a fairing similar to the CTX700 above. Everything else is identical between the (2) CTX 700 models from their frame, engine, seating position etc. Since this model is missing the windshield it comes in with a slightly lower price tag. The MSRP / Price on the 2015 CTX700N DCT / ABS drops down to $7,599. The manual clutch and transmission version of the CTX700N comes in slightly slower with its MSRP / Price at $6,999. 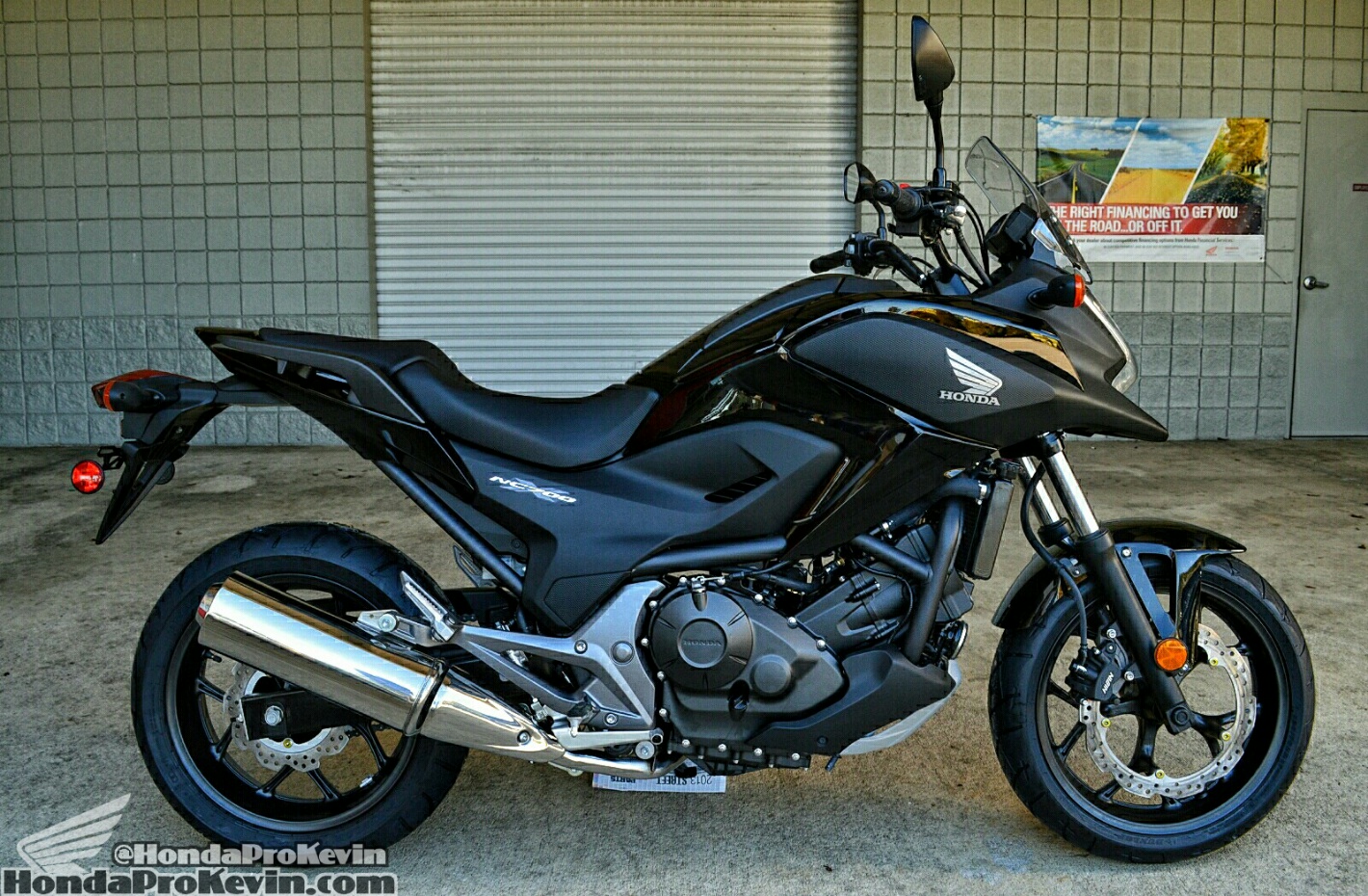 Next we have the 2015 NC700X DCT cousin that comes in with a completely different frame and model class while sharing the same engine / transmission as the CTX models above. The Honda NC700X is an Adventure style motorcycle that offers exceptional ground clearance and added suspension travel when compared to the other models available with Honda’s DCT transmission. You also swap out that “cruiser” seating position for more of a standard motorcycle seating position. Due to this change your feet are moved back quite a bit and are directly beneath you instead of stretched out forward like most cruisers. Which is better? Neither. It all boils down to personal preference and which is more comfortable to you. Personally I prefer my feet below or behind me as I feel like I’m more in control with how the bike maneuvers but some would say otherwise. The 2015 NC700X DCT has an MSRP / Price of $8,099 which is only $600 more than the standard NC700X at $7,499. 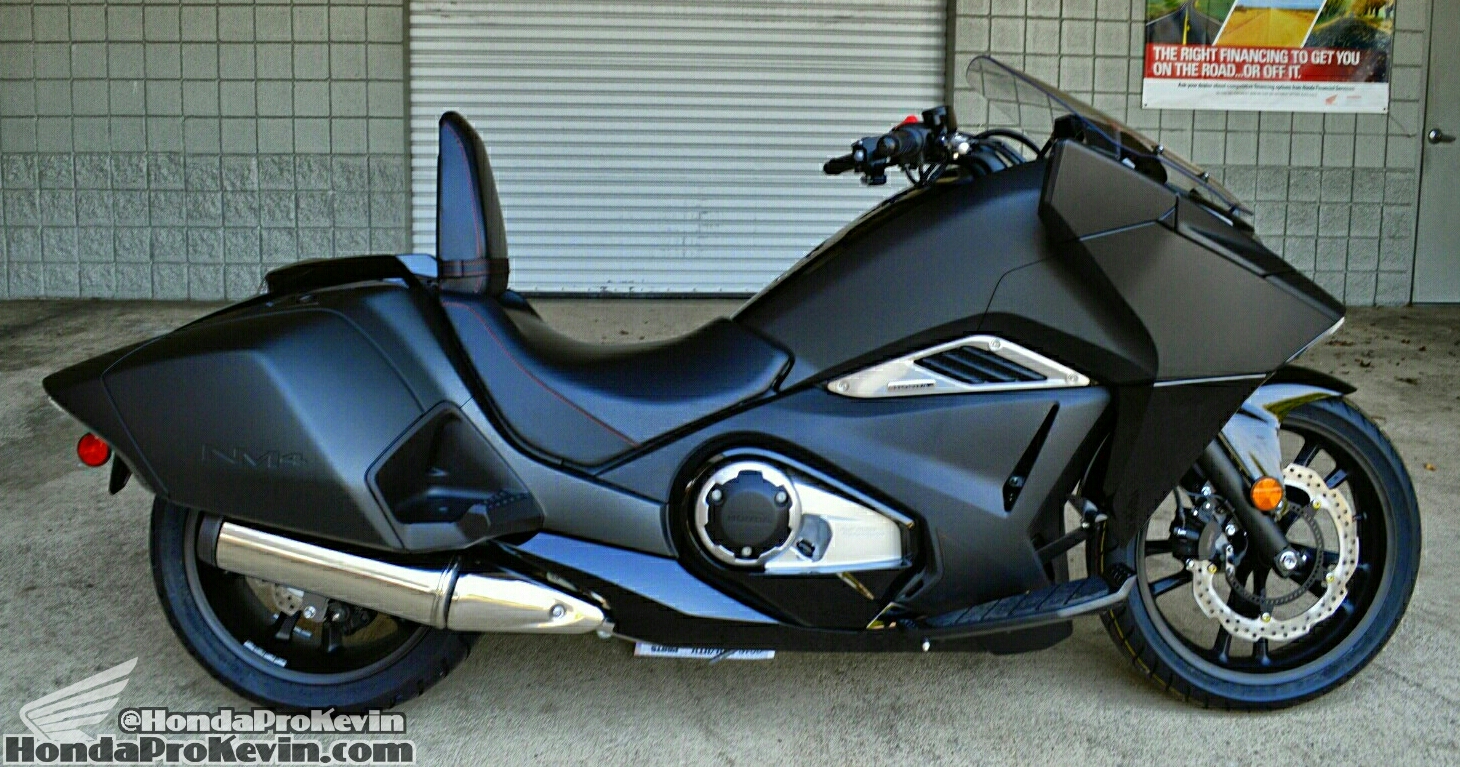 We end with probably the craziest and most wild bike, design wise, that Honda had ever brought to market. This is the all new 2015 Honda NM4 and referred to as Vultus in other parts of the world. The NM4 is also the only newcomer to the model lineup for 2015 as the other DCT models mentioned above are entering their 2+ year of being in production.

What is the Honda NM4? It’s basically a bike that Honda wanted to build and not something they “had to”. It’s substantially more expensive than the other models mentioned above even though they share the same DCT / Dual-Clutch Transmission and engine. Why is the NM4 more expensive than the CTX 700 model lineup? It brings quite a few different features to the table. The NM4 has added storage via saddlebags not only in the rear but also up-front too which isn’t something you see every day. You also get a passenger seat that folds up and acts as a driver backrest with three different positions. Also with the added comfort of a rider backrest you also get floorboards instead of the typical foot-peg to rest your feet on while you click through the miles. Among other small features and differences that set them apart you also have the custom additions like a 200 mm fat rear tire on the NM4. Why so big? No reason other than to make it look cool and set it apart from others. You also have 20+ different color options for the gauges that you can flip between. The gauge cluster also has a different look to it than the CTX models and all of those little things add up cost wise. That is why the 2015 NM4 comes in with an MSRP / Price of $10,999.

Is it worth the added price? Only you can answer that… I will say we have had problems keeping the NM4 in stock due to Honda keeping them as a limited release model for 2015. I think it hits a sweet spot with the child inside all of us. We want something that looks wild and gets attention while we roll down the road or pull in at the local bike spot. 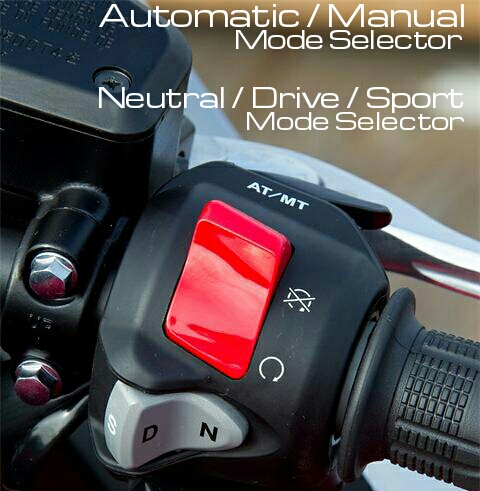 Very easy! You have essentially (3) drive modes. You can put it in D which stands for Drive and just roll on the throttle to go. You also have a Sport mode shown below with the S. It shortens up the gear ratio inside the transmission and shifts quicker etc while still keeping it fully automatic. Want to change gears manually? Click it over into Manual mode shown above by MT and then you can click through the gears on the left side of the handlebar pictured below.

How does the DCT Transmission work? How do you ride an automatic motorcycle? Click Here 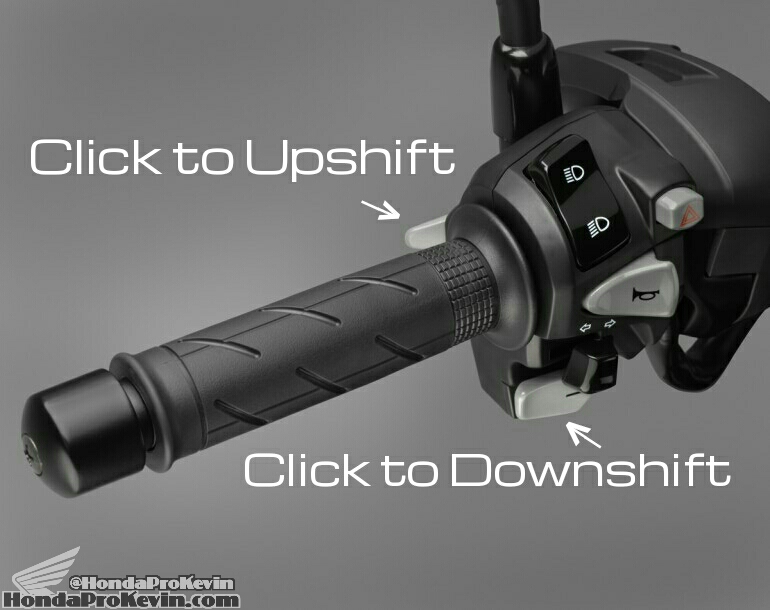 We do still have some that look down on automatic motorcycles considering them as nothing but a glorified scooter so-to-say. More and more are giving them a chance though and I can say that everyone who has taken one for a demo ride is surprised by how much they enjoyed it. I have more and more people who have ridden for many years decide to go with an automatic model as their next motorcycle and to date haven’t had a single one regret their purchase. It’s amazing how much more you pay attention to other things around you can what all you can take in when you aren’t thinking about changing gears etc. They aren’t for everyone of course but I think this segment of the market will continue to grow over the years.

What’s your opinion on Automatic Motorcycles?

Which DCT Automatic Motorcycle is your favorite in the 2015 model lineup?