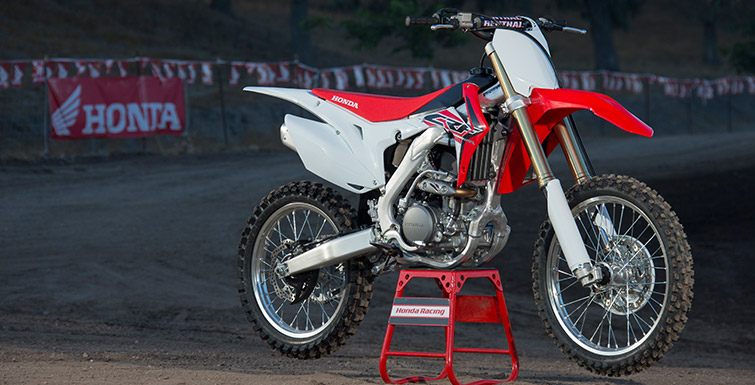 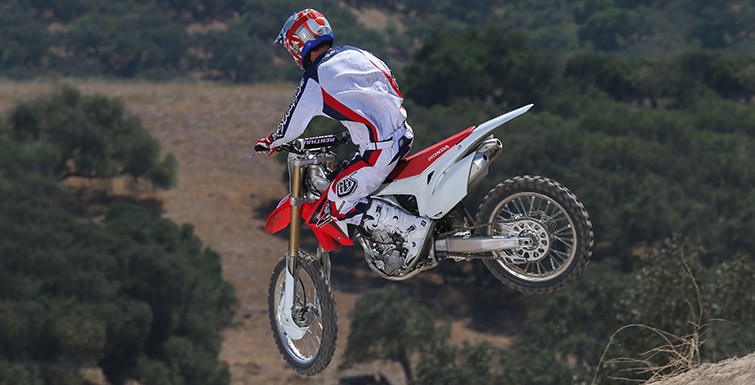 It’s that time of the year again in the dirt bike world… Honda just made their official 2016 CRF250R model announcement with all of the changes and upgrades present this year when comparing the 2016 CRF250R vs 2015 CRF250R.

This is the one market segment that Honda still does quite a few changes year after year when normally they’ll do a re-design and let it run for many years. That is so they can recoup the R&D costs by spreading out the chunk of change spent into 3-4 or sometimes 5-6+ year spans.

A lot of times people wonder why the CRF-R models are so pricey… When Honda is dumping millions and millions year after year in making them lighter, faster, more technology etc they have to pass that cost on to us since they are in this business to make money. 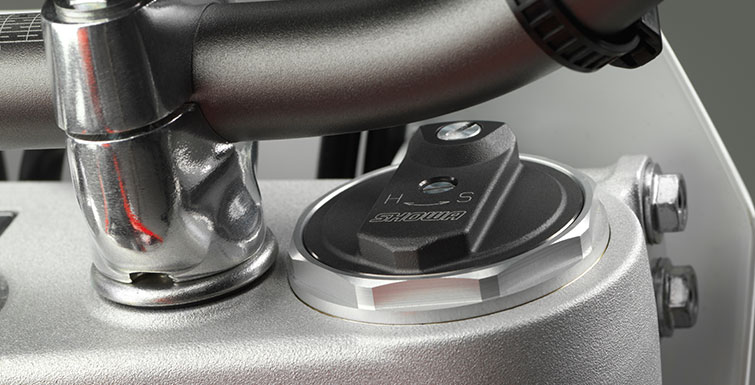 The same used to be said about the sport bike market in their hay-day as they were revamped every couple of years in the same manner. When the economy tanked and sport bike sales went with it, the days of getting better models every couple of years went out the window. Long story short, as long as people keep buying dirt bikes like they do we will continue to see these incredible changes and upgrades year after year.

The CRF250R in 2015 was always a fighter and finished on the podium more times than not and thanks to even more changes to bump the horsepower and improve handling we are going to see even more CRF250R bikes on the podium for 2016!  What kind of changes / upgrades are we talking about for 2016 on the CRF250R? Honda sent their engine wizards into the engine and bumped up the compression, new valve springs, titanium exhaust valves, cams receiving even more lift. What’s amazing is that we aren’t even done with the changes. Honda also made changes to the porting on the cylinder head and the connecting rod and piston shape were also tweaked. The air intake has also been changed with the exhaust getting larger outlet diameters for increased breathing capabilities as well as a new header pipe resonator to help increase the horsepower rating even more on the 2016 CRF250R. Did Honda stop there with upgrades and changes on the CRF250R for 2016? Nope! Honda also made some changes to the fuel mapping and the radiators were also bumped up in size for better cooling while you’re out at the motocross / supercross track. On top of all these other changes Honda also extended the fork length by 5 mm to improve handling and stability too. It’s amazing how something as small as a 5 mm bump can make on improving the way a bike feels. But like I mentioned above, that’s why these bikes pull the big bucks price-wise. Honda’s R&D team and race teams do anything and everything they can to squeeze any and every last ounce out of these bikes. 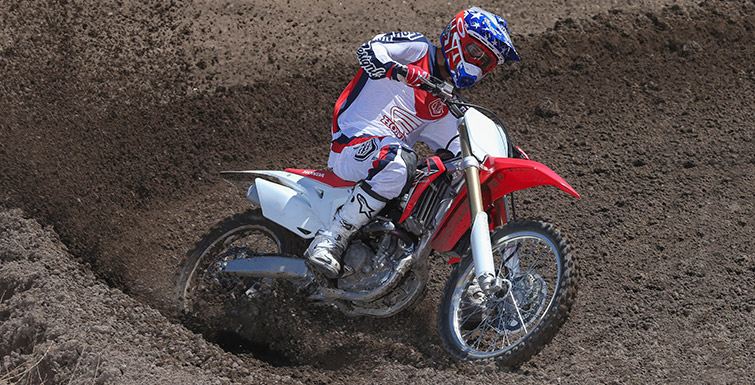 It doesn’t matter if you’re a professional or amateur racer. If you want to be on the podium this year, you’ll want to be on a Honda!

Short Twin-Muffler Exhaust System / CRF250R
Like our CRF450R, the CRF250R uses an exclusive twin-muffler setup. The mufflers are way shorter and lower, tucking in much closer to the bike’s
center of mass. That helps make the CRF250R a better handling machine, and also contributes to the bike’s improved power. For 2016, the mufflers’ outlet pipes are bigger, too. 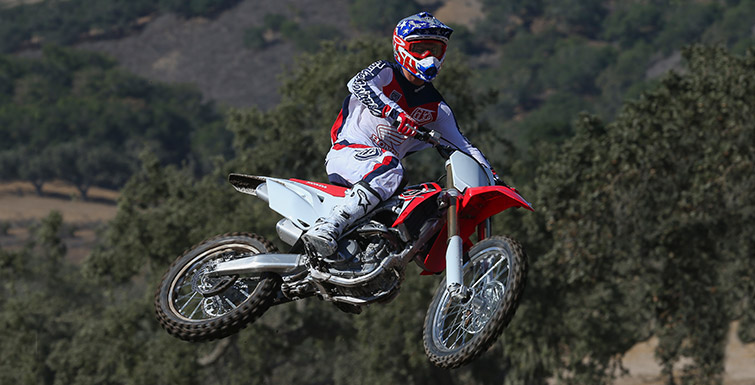 Lightweight Rear Subframe / CRF250R
The CRF250R’s twin-muffler setup lets our engineers move the mufflers towards the bike’s center of mass. That
also lets us move their mounting points so the subframe can be lighter—and that means improved handling characteristics.

Next-Generation Aluminum Frame / CRF250R
The CRF250R’s twin-spar aluminum chassis features lower frame spars to help lower the center of gravity and improve center of mass. The result? A
machine that’s both responsive and stable, and that’s easier than ever to rail around the next berm.

Engine Mode Select Button / CRF250R
A simple handlebar-mounted mode-select button lets you dial in engine power delivery character with a push of your thumb. Choose between Standard, Smooth and Aggressive, depending on track conditions. If you want to change up the settings, you can reprogram the Smooth and Aggressive modes with our optional HRC Tuning Tool for a custom-tailored power delivery. 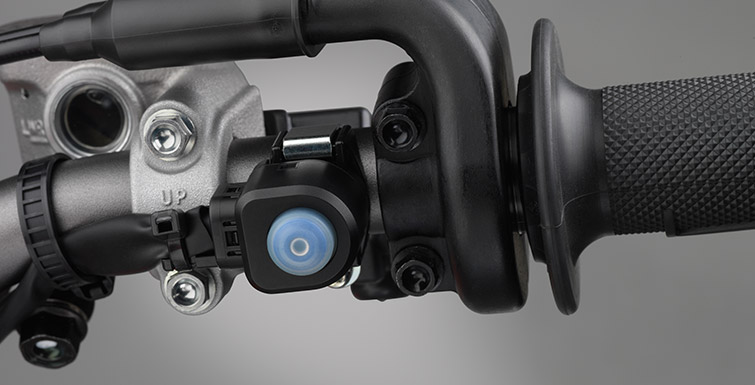 Honda Progressive Steering Damper (HPSD) / CRF250R
The HPSD is designed to work in conjunction with the front and rear suspension to give you unmatched
steering precision under braking, acceleration, and in the whoops, ruts, and hardpack. There’s nothing like it! 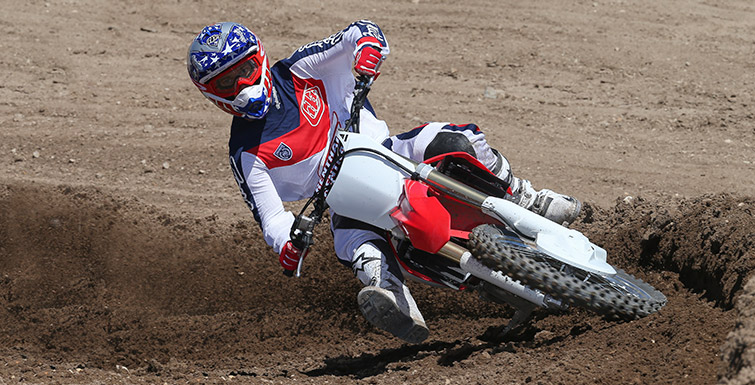 PGM-FI Settings / CRF250R
The settings on the CRF250R’s Programmed Fuel Injection are dialed in to help deliver smooth, predictable engine performance. But you can try
your hand at tuning, too, with our available HRC Fuel Injection Setting Tool. It’s easily adjustable to specific track conditions, and you can refine your own settings in place of the smooth and aggressive settings on the engine mode selector. Information available from Powersports.Honda.com

Important Updates / Breakdown via Chart Below:

To increase power for 2016, Honda made a number of changes to the CRF250R engine, including lightening the piston and connecting rod, boosting compression, switching to titanium exhaust valves, revising the intake and exhaust ports, adding an exhaust resonator to the header pipe and increasing the diameter of the inner muffler pipe. Corresponding with the increased power, capacity of the left radiator was enlarged to aid cooling.

For 2016, the CRF250R retains Showa’s Separate Function Fork Triple Air Chamber (SFF TAC), but with a number of updates. As before, the air chambers are incorporated in the left leg, while the right leg is devoted to damping. (This comes from feedback through the racing program with the works Showa SFF TAC.) Also, Honda houses all three air chambers (Inner Chamber, Outer Chamber, Balance Chamber) inside the fork, which is consistent with the factory Showa fork and helps reduce the chance of impact damage to the Balance Chamber.

Compared to the 2015 CRF250R, pressure in the Inner Chamber (i.e. primary spring) has been reduced to provide more suppleness in initial travel. Correspondingly, a redesigned seal decreases friction, and a third adjustment valve has been added so that Outer Chamber pressure can be increased to resist bottoming. (Previously, only the Inner Chamber and Balance Chamber could be adjusted.)

As with coil-spring forks, Honda recommends that most tuning be done through valving; air-chamber pressure should be adjusted only to alter spring rate. The Showa SFF-Air Support smart-phone app can be helpful for determining proper air-pressure settings.

The 2016 CRF250R is scheduled to release and be on dealerships showroom floors in September of 2015.