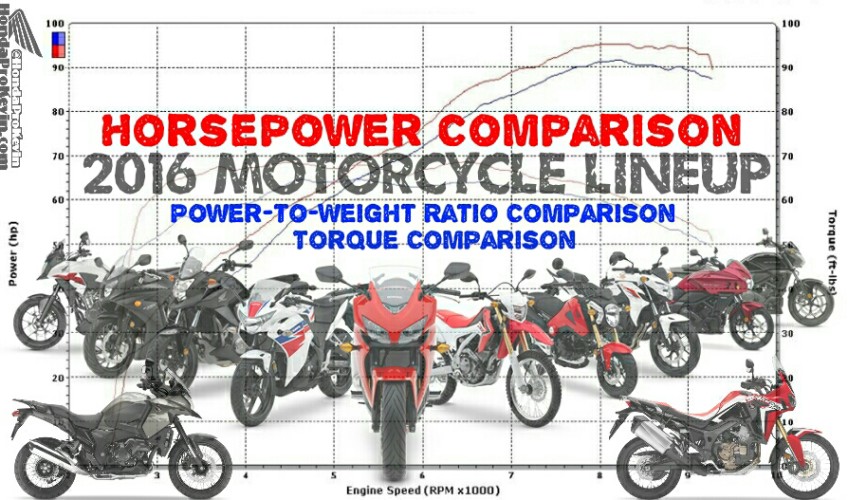 Want to compare the performance numbers on a 2016 Honda motorcycle or scooter? If so, you’ve probably found out by now that this information can be quite difficult to find. Well, correct information that is…

Below, you’ll find the entire 2016 Cruiser model lineup horsepower figures from the 250 / 750 / 1300 models as well as all of the Touring models from Honda ranging from their 700 cc bikes up to the 1800 Gold Wing and all of its variants (F6B / Valkyrie). I also cover all of the CBR models ranging from the CBR300R to the CBR1000RR and everything in between. Want to see how a 50 cc Honda Ruckus scooter stacks up horsepower / performance wise compared to the Grom or PCX150, Metropolitan etc? I’ve got all of those below too. If it’s a Honda and it was produced in 2016 (USA and select other models), you’ll see the horsepower numbers below in the chart. If a model wasn’t produced in 2016 but was recently discontinued, I have included them as well because some dealers may still be sitting on leftovers of that particular motorcycle.

It’s next to impossible to calculate 0-60 times and or 1/4 mile drag-strip times on all of the 2016 motorcycles listed below as there are too many variables to do it by calculating numbers etc. The only way to do a fair comparison on those figures would be to have the same rider on the same day take each model out and abuse them. Don’t get me wrong, I’d love to do that and if anyone ever wants to pony up the money to make it happen I’m game haha. Due to not being able to make that happen, the next best way to compare them is by calculating their power-to-weight ratio.

I calculated the performance numbers on each model by doing a simple Power-to-Weight Ratio comparison and then throwing the numbers in the chart below beside each model and each models horsepower ratings. As you can see by the numbers, just because a motorcycle has a larger engine – it doesn’t necessarily mean it will be faster or win in a drag-race etc. You also have a lot of other things to factor in like gear-ratios etc but we won’t dive into that can of worms right now.

Any of the number surprising to you guys? Any bikes that you thought made more horsepower than what they really do?

* Models in RED are clickable links for more detailed specs on the model, pictures, videos etc.