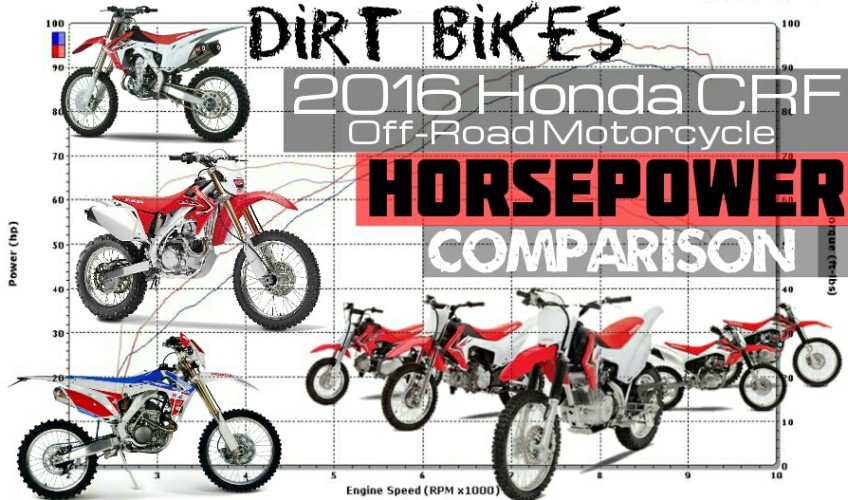 Ever wanted to compare the horsepower rating on some of Honda’s CRF off-road motorcycles? It can be rather confusing trying to find out which model dirt bike is faster than the other as a large engine size / cc displacement doesn’t necessarily mean it makes more horsepower or is faster etc. Example, you would think the CRF110F would make more horsepower than a CRF80F – right? Nope… As you can see below, the CRF110F actually makes less HP than the CRF80F but the 110F makes more torque.

Another example on engine size not always equaling more power is when you compare cars. You can have a 4-cylinder or 6-cylinder engine that makes more horsepower than an 8-cylinder V8 etc. Long story short, just like with cars – don’t assume just because the engine cc size on a dirt bike is larger than another that it will make more HP / TQ and be faster in sheer acceleration.

One more thing to keep in mind when comparing engine sizes on Honda’s dirt bikes. A larger engine doesn’t always mean a “bigger” bike in physical size when it comes to their seat-height. Example: You would think the CRF110F having a larger engine would mean that it sits up taller than a CRF100F but that is NOT the case… We’re in the model of model / year transitions with models being discontinued and replaced so the model lineup and how the stair-step up will look odd until you actually see the bikes in person and throw your leg over them and until all of Honda’s dealers clean out their leftover 2013 CRF80F / CRF100F inventory that has been replaced CRF125F / CRF125F Big Wheel. Another recent model swap is with the CRF70F that had its last year in 2012 and replaced with the CRF110F in 2013.

⇒⇒⇒⇒ * Key: Model Year’s in ( ) are discontinued models and have been replaced. Some are still sitting on dealers showroom floors though and that’s why I wanted to put their horsepower and torque ratings in this chart.