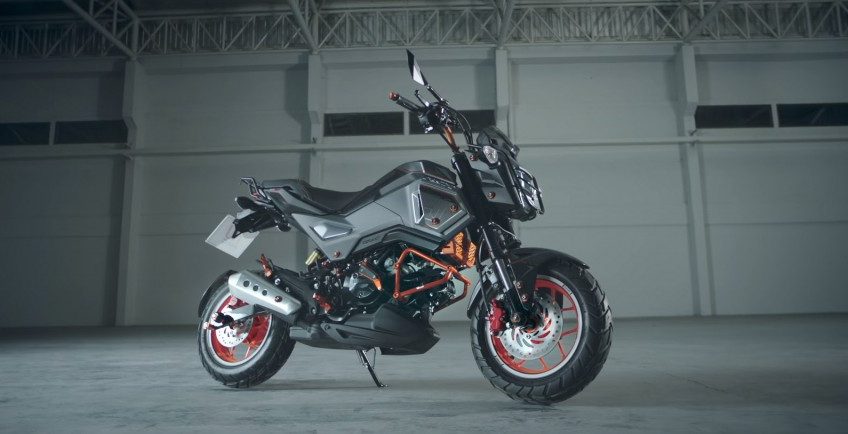 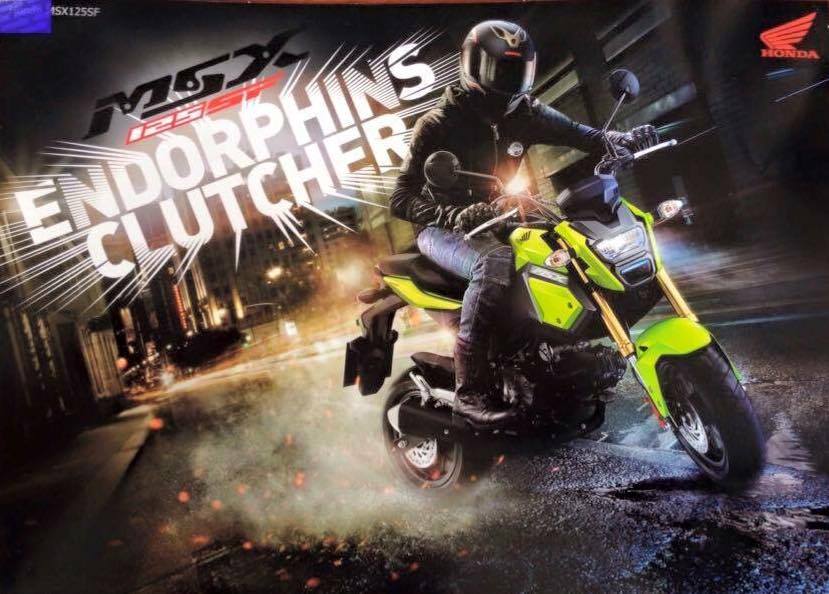 What better way to start off the day (February 18, 2016) than to see Honda finally release an update on the 2016 MSX 125! A lot of us Grom and MSX owners have been patiently or should we say impatiently awaiting this update. I love mine and wouldn’t get rid of it for anything but deep down I have to say I was wishing for the 2016 MSX / Grom to see an upgrade in engine size and maybe see Honda cram a 150cc engine or something along those lines in the frame. Nothing too large though as it would only take away from what makes this bike what it is so-to-say.

The MSX125 carries on Honda’s long tradition of creating fun, appealing small-wheeled leisure motorcycles, which started with the original Monkey bike of 1963, and continued with the Dax and the Ape.

Since its release in 2013, the MSX125 has earned worldwide popularity, with over 300,000 units sold to date. Its exceptionally fuel efficient air-cooled 125cc engine, quirky looks and nimble handling have attracted A1 licence-holders, economy-conscious city commuters, camping vehicle owners and other recreational riders alike. It has also gained popularity as the perfect paddock bike for race teams.

Now for 2016, a redesign gives the MSX125 a sharper new attitude with more of a ‘mini-streetfighter’ feel. The new fuel tank and side panels integrate cleanly to give an edgier outlook; up front a unique, new stacked LED headlight gives the MSX a distinctive, ultra-modern face. The compact, upswept tail unit (with LED taillight), higher pillion seat and short, under-slung exhaust complete the bolder new look.

The MSX125 is what we know as the Grom here in the USA. Originally, we didn’t get the Grom in the USA until a model year (6 months) after it originally released across the pond as they got their 2013 Grom a few months ahead of us in the USA whereas ours was a 2014 model year released in August of 2013. Will the same hold true to the Grom again? Will Honda not give us these changes / upgrades on the 2016 MSX until we get our 2017 Grom released? I could see Honda doing that as they do still have leftover 2015 Grom’s left in their inventory spread out across the USA in warehouses (not dealer inventory). They may want to clear out that inventory to dealers before they want to release the next updated year model. If they keep the potential 2016 Grom price the same as the 2015 model at $3,199 then I could really see them holding out until the 2017 model year as it will be difficult to convince customers to not purchase a 2016 over a 2015 if they are sitting at the dealer with the same price tag on them or within $100-$200 price difference. They’ll be hung with them if they release the newer changed up 2016 MSX as our 2016 Grom as no dealers would want to order them without rebates and incentives which = Honda losing profit. So the best bet financially is to hold out and wait a little longer and get those 2015’s cleared out some. I’m betting we won’t see them until the 2017 production run. If the 2015’s go quickly then we could see the 2017 Grom as an early release model and start to see them shipped to dealers mid summer of 2016 (similar to 2014 Grom released in August of 2013) but if not then they’ll hold out a bit longer. Of course, this is all my opinion and nothing more. None of it is a fact or a definite plan on what Honda will do when it comes to the 2016 or 2017 Grom for the USA.

Easy to use, fun and functional, the original leisure motorcycle was defined by Honda in 1963 with the iconic, small-wheeled Monkey bike and carried on – redefined for each respective generation – with the Dax and Ape. And it’s a formula that still has resonance for a completely new breed of young riders; known as ‘Generation Y’ in the USA, ‘Dek Neaw’ in Thailand and ‘Street-Kei’ in Japan, many of today’s teenagers, having grown up in the borderless, internet age share a culture, fashion and spirit that defies convention.

Instinctively drawn to motorcycling, they need their first two-wheeled transport to be exciting but not unduly challenging, and want it to pack a design that makes them smile. They also have a desire to turn heads and be more than just a little bit different. Plus, given the usual financial pressures of starting out in life, all of this needs to be achieved as economically as possible.

For Honda the early acquisition and introduction to the quality and values of the brand is important – the youthful buyer of a small capacity leisure bike today could very likely be back for something much bigger tomorrow, and lifelong brand loyalty can often result. 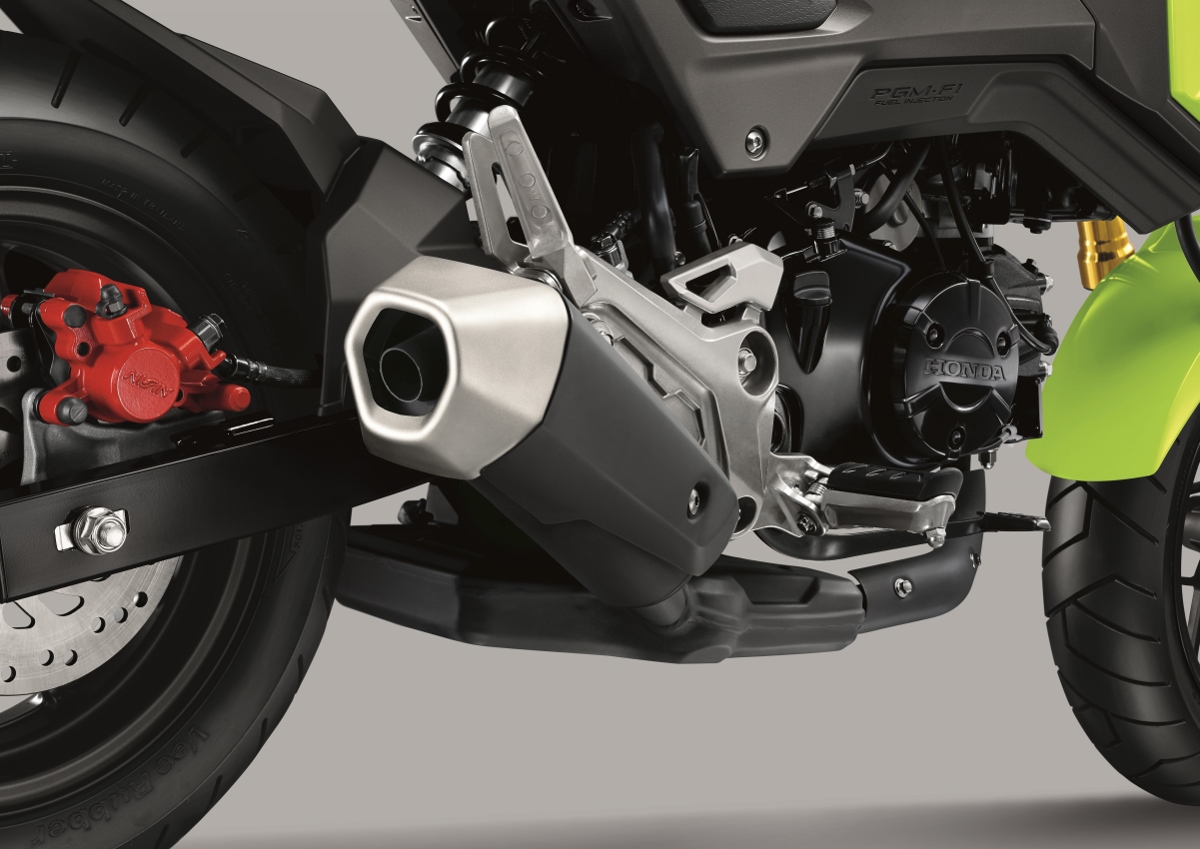 New look for 2016: Compact, easy to ride and practical thanks to full-sized motorcycle parts, the MSX125 was an instant worldwide success in 2013. It is designed for young riders, featuring an economical low-friction engine, four-speed gearbox plus an attitude and style like no other. For 2016, new, more angular design lines, unique stacked LED headlight and a compact, under-slung exhaust combine to give the MSX125 a sharper, new ‘mini streetfighter’ look that fully retains the charm of the original, but with added attitude!

To cater specifically for this generation of young riders, in 2013 Honda produced the MSX125 (Mini Street X-treme 125). A truly global product (and known as the “Grom” in Japan and USA), the MSX125 has been a hit across the world, in particular in Thailand where over a quarter of a million units have been sold. It’s everything expected of a Honda, in terms of performance, build quality and usability, but also wears a style and exudes an attitude all its own.

Manufactured in Thailand the MSX125 is small enough to be supremely manageable yet also has a fully-fledged feel thanks to some standard sized motorcycle parts. It is part mini-bike, part motorcycle with involving performance matched to confident handling and styling that combines a sense of fun with a tough, urban edge. For 2016, a thorough-going redesign gives the MSX125 an even sharper new attitude with more of a ‘mini-streetfighter’ feel from its new design lines, compact underslung exhaust and new stacked LED headlight.

Four patents were applied for through the original development of the MSX125, focused around the split structure tank cover and frame, proof of just how seriously this bike is taken by Honda. Small it may be, but it in terms of worldwide sales, brand awareness and owner satisfaction, its impact has been large.

Priorities for the MSX125’s chassis were threefold: it needed to provide the base for a practical bike that new riders could use – and park – with ease in an urban environment. But it also needed to be just as useable and enjoyable out of town, and also readily accept a pillion.

The comprehensive redesign for 2016 gives the MSX125 a sharper new attitude with more of a ‘mini-streetfighter’ feel. The new fuel tank and side panels integrate cleanly to give an edgier outlook; up front a unique, new stacked LED headlight gives the MSX125 a distinctive, ultra-modern face. The compact, upswept tail unit (with LED taillight), higher pillion seat and short, under-slung exhaust complete the bolder new look.

A steel mono-backbone frame has been employed. Its rigid, square-section tube joins the headstock directly to the swingarm pivot plates and every other part in effect hangs visibly from the frame, greatly contributing to the MSX125’s minimalist look. Specifically tuned vertical/horizontal rigidity and flex in the swingarm pivot and engine hanger plates provides the perfect balance of comfort and confidence.

The new frame structure has also enabled efficient storage of PGM-FI-related components and electrical parts inside the tank cover without reducing fuel capacity (5.5 litres). Wheelbase is a snug 1200mm, with rake and trail of 25⁰ and 81mm and curb weight of 101.7 kg / 224 lbs. The MSX125 has a low 765 mm / 30.1 inch seat height making it very manageable; its size also ensures that motor home owners are sure to find it easy to load/unload, transport and use.

Another aim for the MSX125 was to provide ‘beyond class’ suspension quality. The 31mm USD fork – a first for Honda on a 125cc motorcycle – reduces unsprung weight and thanks to the pistons’ greater pressure-bearing area (compared to a standard telescopic fork) offers improved damping feel throughout the stroke. The top and bottom yokes are full-sized, further enhancing handling and rider feel while a lightweight and robust single rear shock operates a simple and tough H-shape, 50mm x 25mm steel box section swingarm.

Fundamental to the MSX125’s form and function are its 12-inch cast aluminium wheels, which feature wide 2.5-inch rims. New ‘Y’ shaped spokes not only look great they also save weight and the front 120/70-12 and 130/70-12 rear tires also inject a different dynamic, both in terms of looks and performance. Hydraulic dual piston front and single piston rear brake calipers work front 220mm and rear 190mm discs.

Easy to read for its compact size the LCD digital dash delivers all the information the rider needs – speedometer, twin trip meters, fuel gauge and clock. Resetting the trip meters and clock, or alternation between odometer and trip meter is via switches either side of the display.

Suiting its individuality (and that of its owners) the MSX125 is available in four paint options:

The MSX125’s 125cc two-valve air-cooled engine is based on one of Honda’s most well-proven power units; known for its fuel efficiency, ease of use and longevity. Further development of the engine for the MSX125 has resulted in improved fuel economy; the engine uses low-friction technology such as an offset cylinder and a roller-rocker arm for the valve gear. Reducing crank inertia has also resulted in improved throttle feel and a smooth power delivery.

Imparting a motorcycle feel to the MSX125, the four-speed gearbox is managed via manual clutch and offers smooth and consistent gear changes. The 15T gearbox sprocket, 34T final drive sprocket and 12-inch wheels deliver lively around-town response plus the ability to travel slowly in a high gear – perfect for threading easily through tight traffic.

Sophisticated PGM-FI guarantees highly efficient combustion, and works in conjunction with both air intake and exhaust to deliver an involving experience at the throttle. The air intake connecting tube and funnel is divided in two, allowing its length to be optimized for consistent torque delivery at low and mid rpm. A large, 3-litre airbox and panel-type, wet paper filter provide reliable and quiet airflow; the filter itself has a life of 16,000km. A new, short, under-slung exhaust pipe is fitted for the 2016 model.

All in all the MSX125’s engine packs a perfect blend of punchy roll-on performance with useful, accessible and fun all-round ability. The effort put into reducing internal friction and increasing intake and exhaust efficiency has also produced a highly economical unit.

* Please note that the figures provided are results obtained by Honda under standardised testing conditions. Tests are conducted on a rolling road using a standard version of the vehicle with only one rider and no additional optional equipment. Actual fuel consumption may vary depending on how you ride, how you maintain your vehicle, weather, road conditions, tire pressure, installation of accessories, cargo, rider and passenger weight, and other factors.