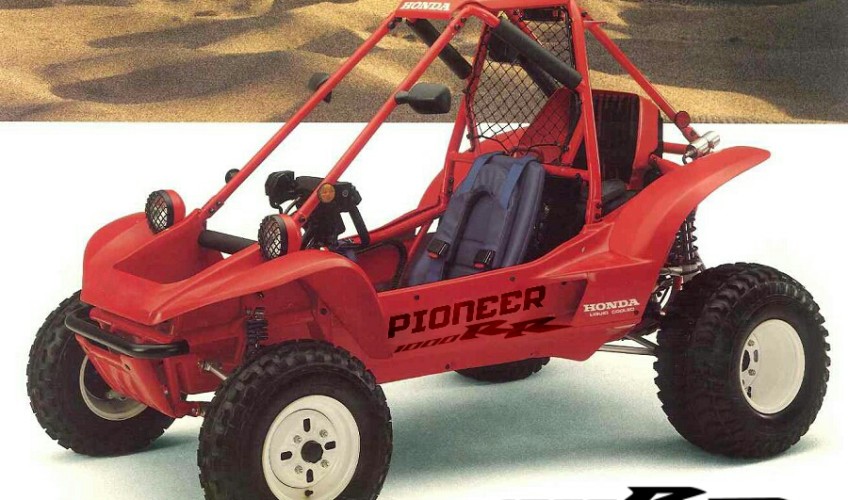 July 14, 2015 | With the excitement of the newly announced 2016 Honda Pioneer 1000 spreading like wildfire some of us have something else on our minds. Something that may be possibly closer than ever…

If you’re anything like me you’ve been patiently waiting for Honda to enter the extremely competitive sport side by side market. When Honda entered the utility market back in 2009 with the Big Red it gave us hope. Maybe. Just maybe… Honda has something in the works I thought to myself. 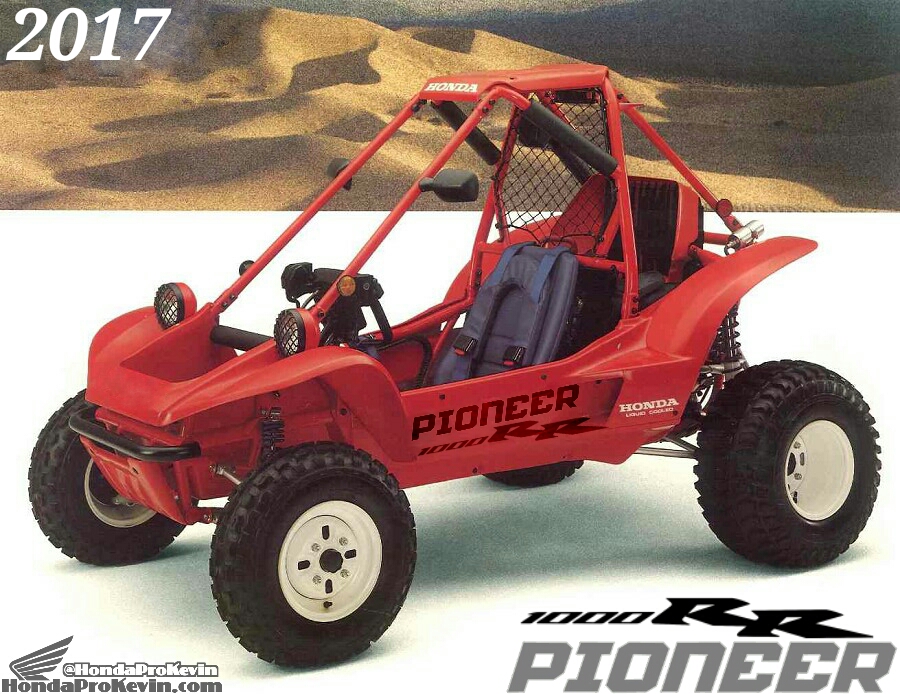 Fast forward a few years and Honda has expanded and improved their SxS model lineup ten-fold since that day they entered the scene. We still don’t have a true sport model but we may be closer than ever to seeing one now with the announcement of the 2016 Pioneer 1000 & 1000-5. You may ask “What does that have to do with a sport UTV?”. Speaking hypothetically it could have a lot to do with a sport model. Honda has seen for years and years now that we want more power than what the 700 class engine has. The Big Red, Pioneer 700, Pioneer 700-4 all shared that same engine and they are capable machines but not quote powerful enough for some of us. The Pioneer 500 was a step in the right direction with offering a different transmission setup than any other model on the market but still neutered in the power department. We could be closer than ever now to seeing a sport SxS / Side by Side ATV because Honda NOW has an engine they can use. A 1000 class engine that in its detuned form creates 77 horsepower. With Honda throwing more of a performance orientated tune at it there’s no reason it couldn’t see 100+ horsepower. Another piece to the puzzle is the drivetrain. Honda’s transmissions used in the past Pioneer utility models couldn’t handle that kind of HP. Now, we have the DCT (Dual-Clutch Transmission) Honda developed for the Pioneer 1000. Something that can handle serious abuse while putting 100+ horsepower to the tires while being abused off road. When you add in the fact that you can row through the six-speed transmission via paddle shifters it takes the fun level up quite a few more notches. 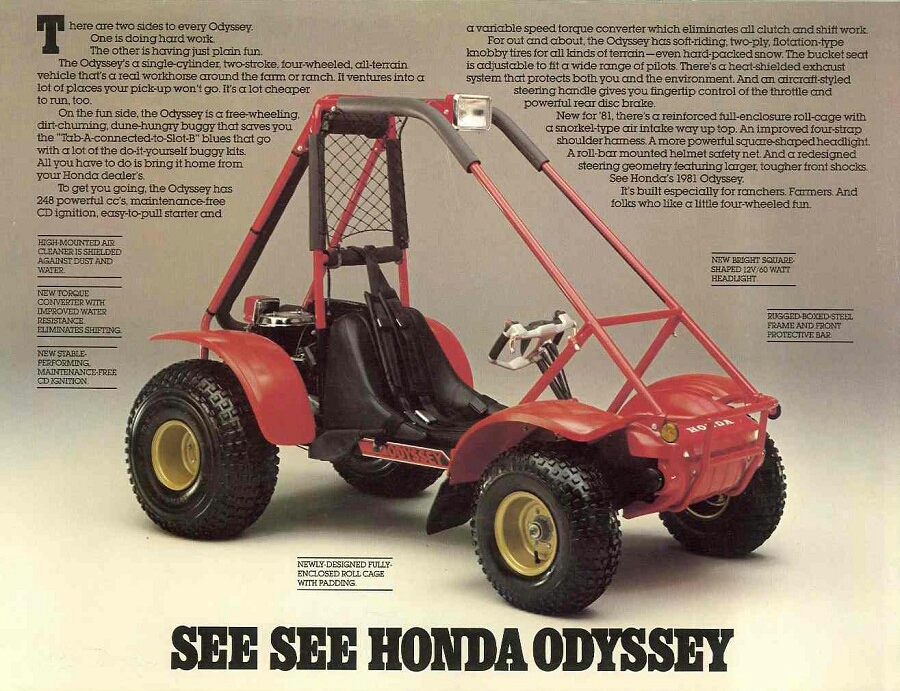 Many people born in the last couple decades forget that Honda created this market many many years ago. Back in the 1980’s Honda brought us the Pilot and Odyssey. They were waaaay ahead of their time! Many said they were over-engineered and while that may be true that’s what I love about Honda as a company. I would rather pay that extra few bucks $$ for something over-engineered than purchase a machine that can’t handle normal use and a little bit of abuse. I won’t name any names but there’s a couple of manufacturers that put out products that have questionable histories when it comes to being reliable.

They fizzled off because of not being accepted in large numbers like you would have expected. The price tag at the last model year of the Pilot in 1990 had grown to $5,999. With an MSRP that high you could get faster machines for less $$ so that didn’t help sales.  They have grown rather large followings at the start of this century and even to this day. It’s about like finding a needle in haystack though to find one that’s not a basket case. That $5,999 price tag in 1990 would tally up to $10,000+ in today’s money. We all know that people don’t mind paying big bucks today for a sport / performance orientated side by side. The 1000 cc machines today exceed $20,000 without even blinking an eye. 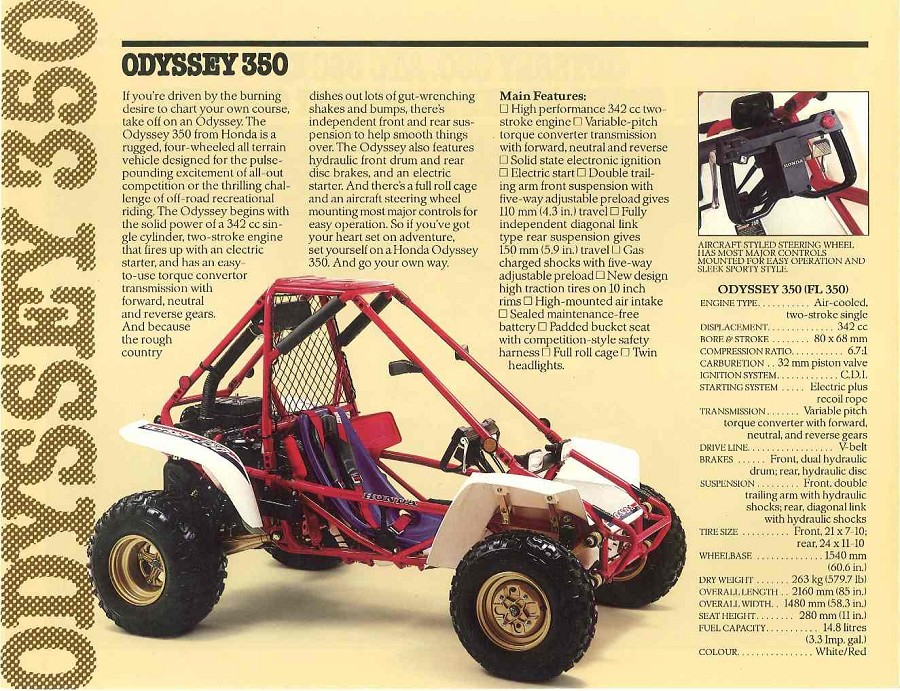 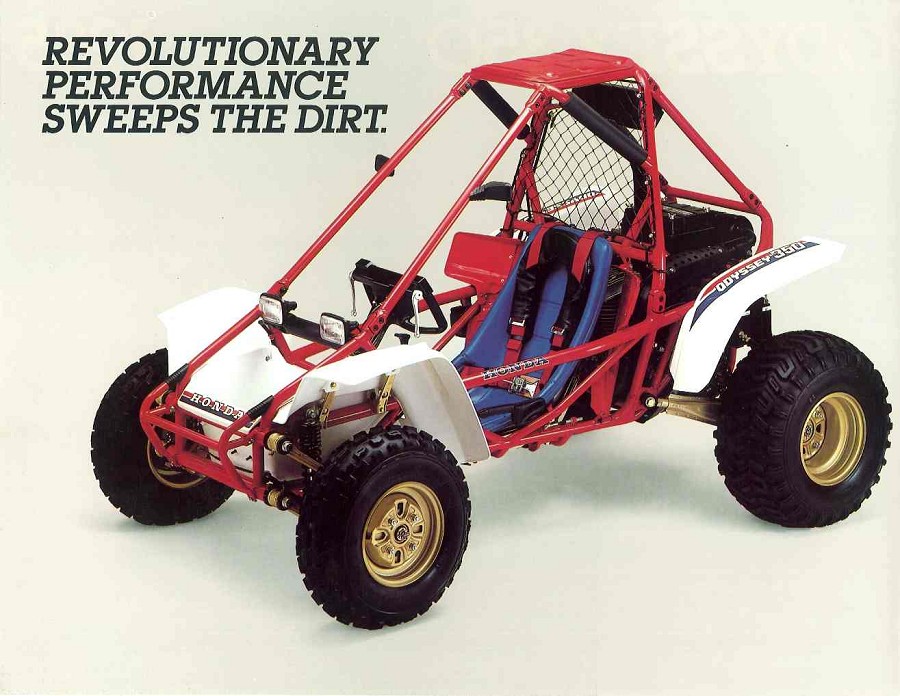 Check some video’s out on YouTube of old school Pilot and Odyssey models with larger engines thrown in them. Some have even went to the extreme and crammed 600 / 1000 cc sportbike engines in them. I don’t know if I could think of a offroad machine that would be more fun than a Pilot with a CBR600RR engine in the back. Mmmm that would be ridiculous! 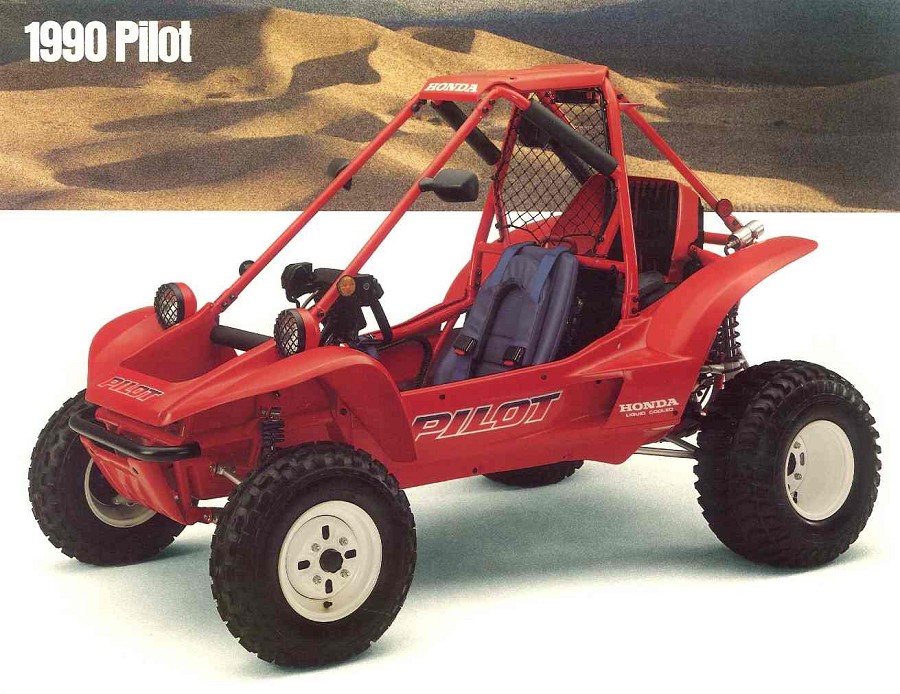 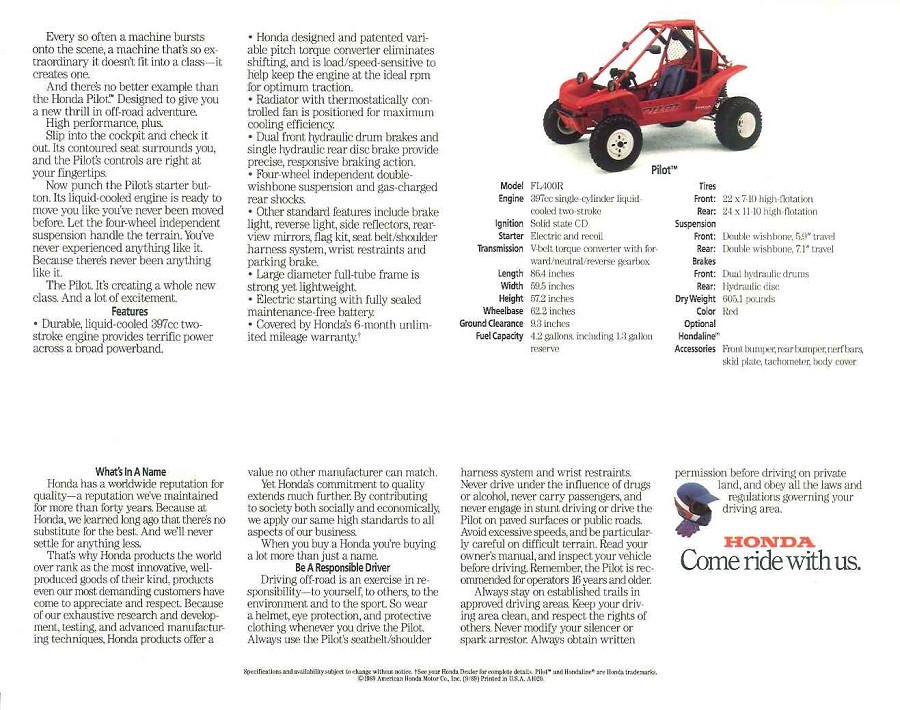 I got a little off topic but my main reason for mentioning the Pilot & Odyssey was to remind the naysayers. Remind those that say Honda can’t build a sport side by side etc – they can! They did it long before anyone else. The big kicker though… will Honda do it again? 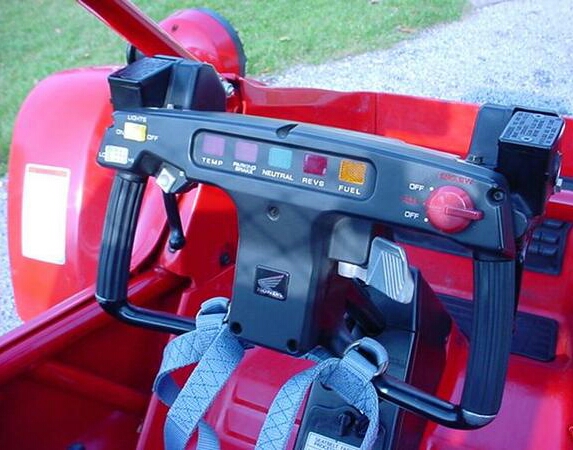 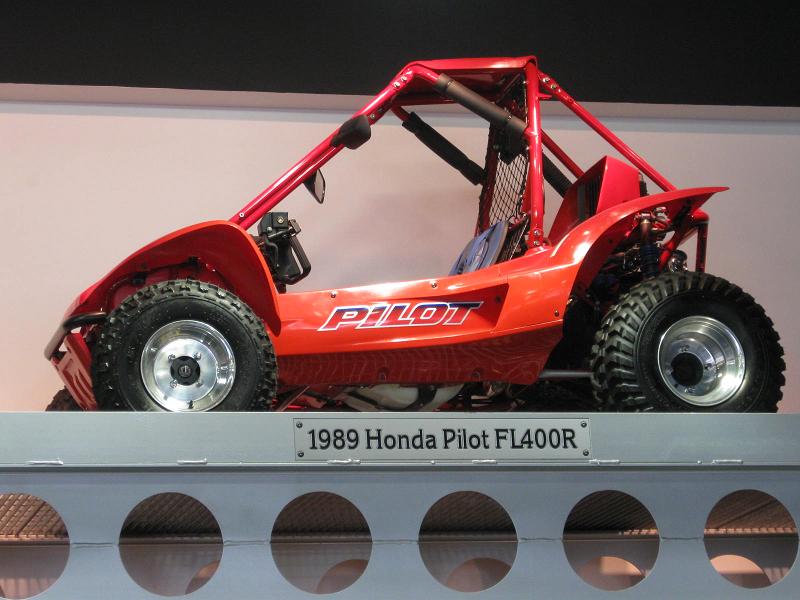 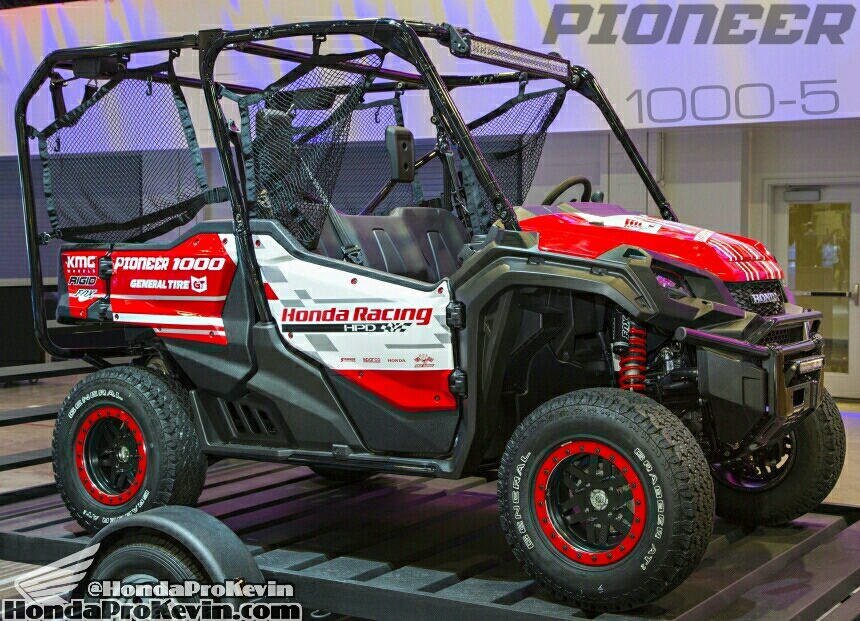 What kind of horsepower and features would it take from a Honda sport side by side to make you forget the other brands from Polaris, Arctic Cat, Yamaha, Kawasaki etc?