For 2017, two versions of the CB1100 will be available. The CB1100 RS* offers a new kind of more sporting appeal, while the CB1100 EX has been imbued with extra layers of retro style and several performance upgrades.

“As with past CBs, we understand the timeless pleasure that our customers get from owning and riding an air-cooled inline four-cylinder motorcycle. So building on the CB1100’s desirability and joy of ownership, while adding functionality and quality to deepen the sense of fulfilment, were very important elements for us to consider. With the CB1100 EX we hope many riders get to appreciate and understand a very traditional motorcycle structure.”

The CB1100 EX’s classic tubular steel double cradle frame holds the engine with four rigid and two rubber mounts. It features relaxed steering geometry, with rake and trail of 27°/114mm and wheelbase of 1490mm, delivering sure-footed stability with neutral handling characteristics. The ‘rider triangle’ is also relaxed and upright; seat height is 790mm and the handlebar shape has been revised to maintain a neutral position. Curb weight is 562 lbs (255kg).

To give excellent control the CB1100 EX is equipped with a Showa Dual Bending Valve (SDBV) 41mm front fork, which uses two valves to generate both compression and rebound damping force for a linear suspension feel. A new die-cast aluminum top yoke features a buffed finish and clear coat, while the bottom yoke holds the fork legs in a higher position.

Twin Showa rear shocks offer adjustable spring preload and operate through a steel swingarm, which has a clean look thanks to an under slung rear brake hose. An aluminum chain guard replaces the previous plastic design. 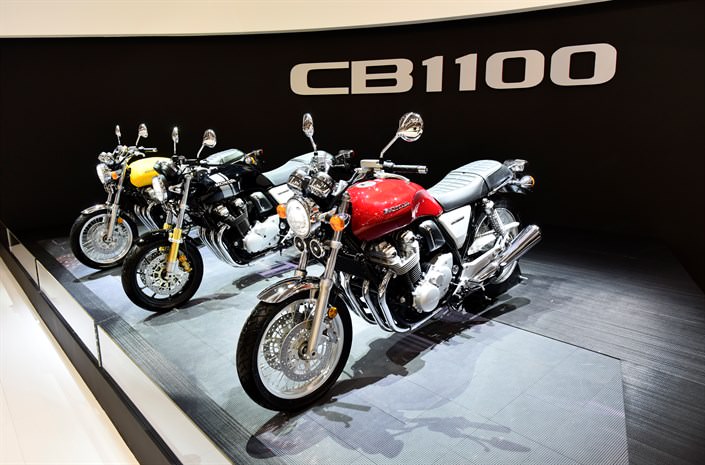 The CB1100 EX features redesigned 18-inch spoke wheels, wearing 110/80 R18 and 140/70 R18 front and rear tires. Smaller aluminum hubs lace the wheel rim with 40 longer stainless steel (rather than the 48) zinc-plated spokes. Twin 296mm floating discs up front are mated to four-piston Nissin calipers, with a 256mm disc and single-piston caliper at the rear. ABS is fitted as standard.

Together with the look of the exposed engine, the shape of the fuel tank – its curves and lines – go a long way to give a naked motorcycle its character and appeal. Honda’s engineers wanted to maintain a 186 mile (300km) plus range, but were also focused on creating a truly hand-made look. The 4.4 gallon (16.8L) fuel tank they came up with does away with the seam-welded lips along both bottom edges, and pays homage both to CB history and contemporary style with a cutaway rear section that displays the cam cover to the rider. An aircraft style filler cap adds another visible touch of class.

The side panels are made of brushed aluminum with a textured ‘hairline’ finish while the seat is well padded and comfortable. Chrome seat rails add seamless lines, with no clutter, and the chrome steel rear mudguard has a more rounded cross section. Smaller die-cast aluminum hangers mount both rider and pillion footpegs, while a longer sidestand makes it easier to get the machine upright.

A chromed round front headlight (it’s now LED, with a spiral running light) crowns the front of the machine, underlined by twin horns. It’s held with aluminum stays and flanked by classic-style 70mm diameter indicators. The LED rear light, indicators and number plate mounting bracket has been minimalised for a streamlined look. 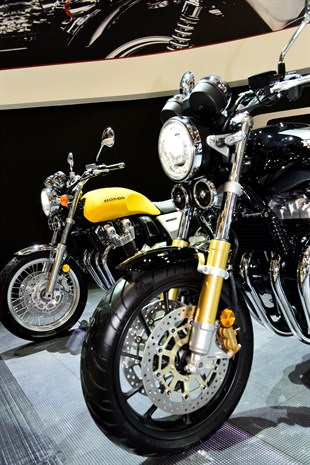 Proudly at the heart of the CB1100 EX is its silky-smooth DOHC engine. Linear, instantly accessible power and torque is what this motor’s all about, and plenty of it, anywhere in the rev range. Maximum power output of 89 horsepower (66kW) arrives at 7,500rpm with peak torque figure of 67 lb/ft (91Nm) delivered @ 5,500rpm.

Drive for the twin camshafts is via central chain, and the valve included angle is 26.5° inlet and exhaust. Inlet valve diameter is 27mm, with a 2.5mm stem; exhaust 24mm with 2.5mm stem. A single secondary balancer shaft ensures smooth running.

PGM-FI and 32mm throttle body are fed through a revised, shortened air inlet tract and new air cleaner, and work with the pair of shorter (minus 70mm in length, 7% less in diameter and 5.3lbs (2.4kg) lighter than previous design) chrome plated exhaust mufflers to boost low and mid-rpm engine reaction.

Internally split into two expansion chambers, each muffler features dual hole-punched link pipes optimised for resonance and the generation of an evocative four-cylinder engine note. Both mufflers hug the machine tighter for improved ground clearance and the downpipes are double skinned to stop heat-induced discoloration.

Now… To the underlying question at hand that so many of you are probably wondering about. Will the 2017 Honda CB1100 EX cross the pond and be for sale in the USA? That’s a negative. Well, atleast at this time. Honda hasn’t officially answered that question which can be a good thing. Think of it like when you asked the hottest girl out in school and you got a “maybe” haha. In all seriousness though, we’ll know within the next 60 days as to whether or not Honda will release the 2017 CB1100 EX in the US. Until then, let’s all drool over this B-E-A-UTIFUL piece of machinery Honda has built – the CB1100 EX!

Honda just made it ‘official’ and the 2017 CB1100 EX releasing in the USA and will be available to buy in May of 2017 per Honda’s scheduled release date on the CB1100EX. Check out the detailed 2017 CB1100 EX Model Announcement / Release for the USA by Clicking Here.