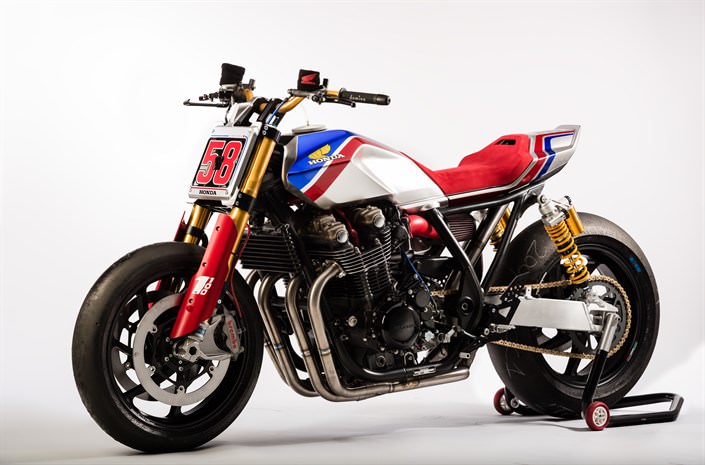 Take a peek at this absolutely AWESOME custom concept built by Honda’s R&D designers out of Rome! Honda has showed off quite a few custom CB1100 concept motorcycles over the years but this one has got to be my favorite by a mile. I can’t look at it without thinking about how much it would bring out my inner-hooligan!

What do you guys think about this B-E-A-UTIFUL piece of machinery?

Per Honda: The CB1100 TR concept was created to share the emotion and excitement of USA flat track culture.

Honda’s Rome-based R&D designers have imagined the CB1100 TR as the ‘King of Urban Flat Track Circuits’, as a counterpoint to the off-road oval circuit look of the traditional flat tracker. While it exudes a pure racing spirit, its design has more of the ‘street’ orientation favored by European customers.

The number 58 is used on the CB1100 TR to honor the memory of Honda’s beloved MotoGP rider Marco Simoncelli, who passed away 5 years ago.