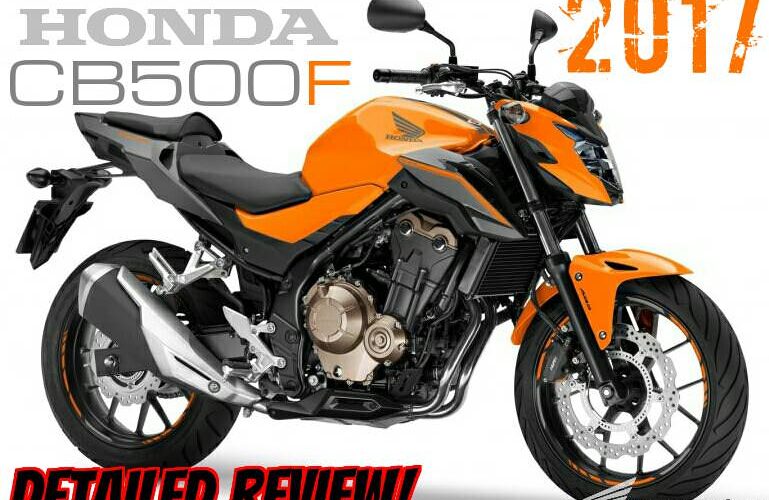 It’s 2017 and the Honda CB500F is back again to dominate the 500cc motorcycle class! In my opinion, the CB500F is the best looking model and most fun to ride out of the trio of 500cc motorcycles from Honda for 2017: CBR500R, CB500X and CB500F. Last year, Honda took an already awesome bike that was introduced originally in 2013 and made it even better with new styling changes, larger fuel tank, LED lighting, adjustable front forks and to top it off a ton of new color options.

The CB500F is one of (3) 500cc motorcycles that share the same platform for 2017, originally introduced in 2013. You have the CB500F which is the naked ‘streetfighter’ style also commonly referred to as a ‘standard’ motorcycle. Next, you have the CBR500R that shares the same engine, Frame and transmission but has fairings and lower handlebars to give it that ‘sport bike’ style. Last but not least, you have the CB500X which is an ‘adventure’ style motorcycle. Which is better between the CBR500R, CB500F and CB500X? None. They all perform the same when it comes to performance but they will shine slightly better than the next when compared against the type of riding you’ll be doing whether it be blasting up the mountain or commuting in town versus hitting that dirt road you’ve always wanted to explore. It all boils down to personal preference on which one feels more comfortable to you as they all sit differently and which one you like the ‘looks’ of more than the next. Here’s a few links to blog posts I’ve done in the past on all of the 500cc models:

We should also make note and say our goodbye’s to the oh-so B-E-A-UTIFUL Ross White / Millennium Red Tri-Color scheme (below) for 2017 which in my opinion was one of the best colors we had to choose from last year. RIP… 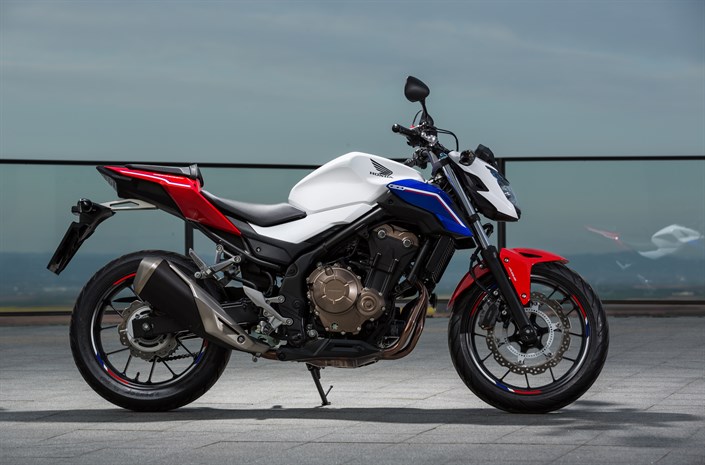 The CB500F joined Honda’s mid-sized line-up in 2013. Compact in size but punching way above its weight, it injects the adrenaline and excitement of full-sized motorcycle ownership into every ride for A2 license-holders moving up in size(overseas); at the same time, its all-round agility, punchy performance and sensible running costs make it a great motorcycle with which to commute through the week and ride for pleasure at the weekend, whatever the rider’s experience level.

The CB500F is a bold evolution that elevates the machine still further, with a shot of naked streetfight style and rider-focussed upgrades that add more fun, pride of ownership and desirability.

While its 471cc DOHC engine – producing 49.6 HP (35kW) and returning 71 MPG – and steel diamond-tube frame remain unchanged, the CB500F emerges for 2016 with new aggressively-sculpted lines front to back. The styling shows off the machine’s mechanical forms; LED headlight and taillight are high quality finishing touches.

The riding experience is improved with the addition of adjustable spring preload in the front forks, redesigned shift drum for smoother gear changes and new short exhaust muffler, with tuned internals, that emits a crisp howl in keeping with the engine’s engaging power delivery.

The styling concept behind the CB500F’s angular minimalism is ‘Mechanical & Aggressive’ with the compact headlight cowl and seat unit – and downsized bodywork – creating a condensed trapezoid form focused around the engine and frame.

The small side panels are split into two parts, with the upper painted. The middle shrouds are also very compact – with angles interlocking with the fuel tank shape – and expose the steel frame and compact parallel twin engine with its premium bronze crank and cylinder case cover.

Both rider and pillion footpeg hangers have been reduced in size, with die-cast aluminum footpegs for the passenger adding a touch of class. The strikingly compact rear seat unit is finished with a clear-lensed rear LED light and sharply- designed steel fender mount. Detail upgrades for rider benefit include a hinged fuel cap and 5-step adjustable span brake lever. The new ‘wave’ key also gives a smoother, more premium feel.

The CB500F will be available in five color options for 2017, down one from last year six options. Honda will also be including wheel stripe decals:

For 2017, the CB500F engine remains the same aside from tweaks to make it more ‘green’ so-to-say that way it would meet new EURO4 emissions regulations. The CB500F’s DOHC, 8-valve liquid-cooled parallel twin layout offers a great balance of physical size and flexible output. The ‘triangle’ proportion of crankshaft, main shaft and countershaft is very similar to that of Honda’s four-cylinder RR engines and much of the internal structure and engineering is taken directly from both the CBR600RR and CBR1000RR.

Bore and stroke is set at 67mm x 66.8mm; the crankshaft pins are phased at 180° and a primary couple-balancer sits behind the cylinders, close to the bike’s center of gravity. The primary and balancer gears use scissor gears, reducing noise. The crank counterweight is specifically shaped for couple-balance and its light weight allows the engine to spin freely, with reduced inertia.

PGM-FI fuel injection provides superb throttle response; the gas flow route from airbox to exhaust is as straight as possible and a plate in the airbox separates the airflow to each cylinder. Peak power of 49.6 horsepower arrives at 8,500 RPM, with 31.7 lb ft torque delivered at 7,000 RPM.

The engine acts as a stressed member, reinforcing the frame’s rigidity with four frame hangers on the cylinder head. Internally the cylinder head uses roller rocker arms; shim-type valve adjustment allows them to be light, for lower valve-spring load and reduced friction. A silent cam chain has the surface of its pins treated with Vanadium, reducing friction with increased protection against dust. Inlet valve diameter is 26.0mm with exhaust valve diameter of 21.5mm.

Bore size of 67mm is identical to that of the CBR600RR. The piston shape is based upon those used in the CBR1000RR to reduce piston ‘noise’ at high rpm. Friction is reduced by the addition of striations on the piston skirt (a finish that increases surface area, introducing gaps in which oil can flow for better lubrication). As with the CBR600RR and CBR1000RR, an AB1 salt bath process, used after isonite nitriding, forms a protective oxidation membrane.

The crankcase uses centrifugally cast thin-walled sleeves, and the same bore interval as the CBR600RR makes them as compact and light as possible. Their internal design reduces the ‘pumping’ losses that can occur with a 180° phased firing order. Using the same internal relief structure as that of the CBR1000RR, the oil pump features improved aeration performance, with reduced friction; a deep sump reduces oil movement under hard cornering and braking. Oil capacity is 3.4 quarts.

A six-speed gearbox mirrors that of its RR cousins which uses the same gear change arm structure and link mechanism. In an update for 2016, the shift drum stopper spring load has been revised, along with the shape of the shift drum center, for smoother, easier gear changing.

The CB500F’s 35mm diameter steel diamond-tube mainframe is light and strong, with a tuned degree of yield that gives plenty of feedback to the rider as road surfaces change. The shape and position of the engine mounts, plus the frame’s rigidity balance, reduce vibration.

Wheelbase is 1410mm and rake and trail are set at 25.5°/102mm giving nimble, yet reassuring steering. Mass centralization, with the engine in very close proximity to the swingarm pivot point, delivers turning agility; optimum front/rear weight distribution ensures stability. Curb weight for the 2016 CB500F comes in at 414 pounds.

Seat height is low at 30.7 inches, making the CB500F very easy to manage and its sporty riding position will comfortably accommodate riders of varying heights thanks to a relatively high handlebar position.

The 41mm telescopic front fork, with 120mm stroke, delivers a compliant yet controlled ride and gives a great connection to the front tire. For 2016 the CB500F gains spring preload adjustment and the fork legs are topped with Blue Alumite. Pro-Link monoshock rear suspension features 9-stage preload adjustment and works through a rigid box-section steel swingarm. Final drive is via 520 sealed chain.