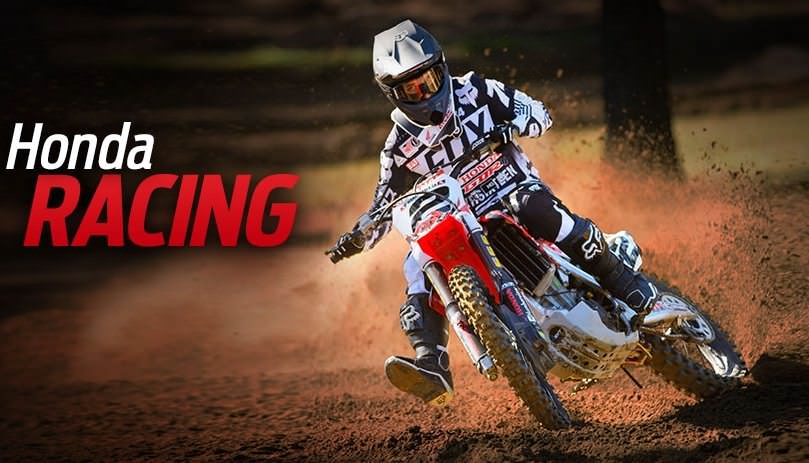 Today is August 11, 2016 and today is a good day! Well, technically today is August 18th as I’m a little behind on my updates as last week you guys crashed my server when I released the 2017 CRF450R / CRF450RX info before Honda made it “official”. It took me a few days to get a new server setup and the good news is that the site is now faster than ever to make it better for you guys as you browse through my ramblings about motorcycles, ATVs, side by sides, scooters etc. Enough about that though, let’s get back on topic! Any day that Honda decides to roll out a new model year motorcycle announcement, it’s difficult not to be in a good mood. I won’t ramble on for paragraph after paragraph like I normally do when it comes to these new model releases so I’m going to get straight to the point and start with the press-release from Honda…

On the 15th anniversary of Honda’s original 450cc class four-stroke motocross model, Honda announces a revolutionary CRF450R that promises to be the most powerful, best-handling Honda motocross machine ever. Honda’s no-compromises approach to designing and developing the new bike was intended to put it at the front of the pack in all areas of performance, resulting in what Honda is calling the “Absolute Holeshot.”

Since its 2002 introduction, the CRF450R has earned an enviable racing pedigree, and the 2017 edition is the best yet, with superior technology and style. Riders know that the most important part of any motocross race is the start, and the new CRF450R Unicam engine has been developed to achieve overwhelming performance in the first 100 feet of battle, offering increased power output but also allowing unparalleled traction. And while arriving to turn one first is significant, winning requires staying in front for the entire moto, which is why Honda engineers designed an all-new chassis with reduced weight and centralized mass. The result is a machine that is at once fast, reliable and forgiving, and that allows riders to more easily extract maximum performance, consistently turning low lap times while simultaneously taxing their bodies less.

In addition, Honda is offering a brand-new model, the CRF450RX, which is based on the 2017 CRF450R but with a number of differences that make it appropriate for closed-course off-road racing like the GNCC series. Like its motocross-focused sibling, the CRF450RX is designed for maximum agility and performance, offering owners superior power along with effortless handling—the ideal woods-racing combination.

Honda also took the opportunity to announce the remainder of its 2017 model-year CRF competition dirt bike model line, including the CRF250R and CRF150R motocross bikes and CRF450X and CRF250X off-road motorcycles.

“We’re very proud to introduce the milestone 2017 edition of Honda’s legendary CRF450R, as well as the brand-new CRF450RX. Both of these models are high-performance machines that represent the epitome of dirt bike engineering. Over the years, each of the milestone CRF450R models has been eagerly anticipated, and the 2017 version is the best yet. We can’t wait to see these models being piloted at the front of the pack by our factory Team Honda HRC and Johnny Campbell Racing squads, our satellite teams, our amateur racers and our customers.” 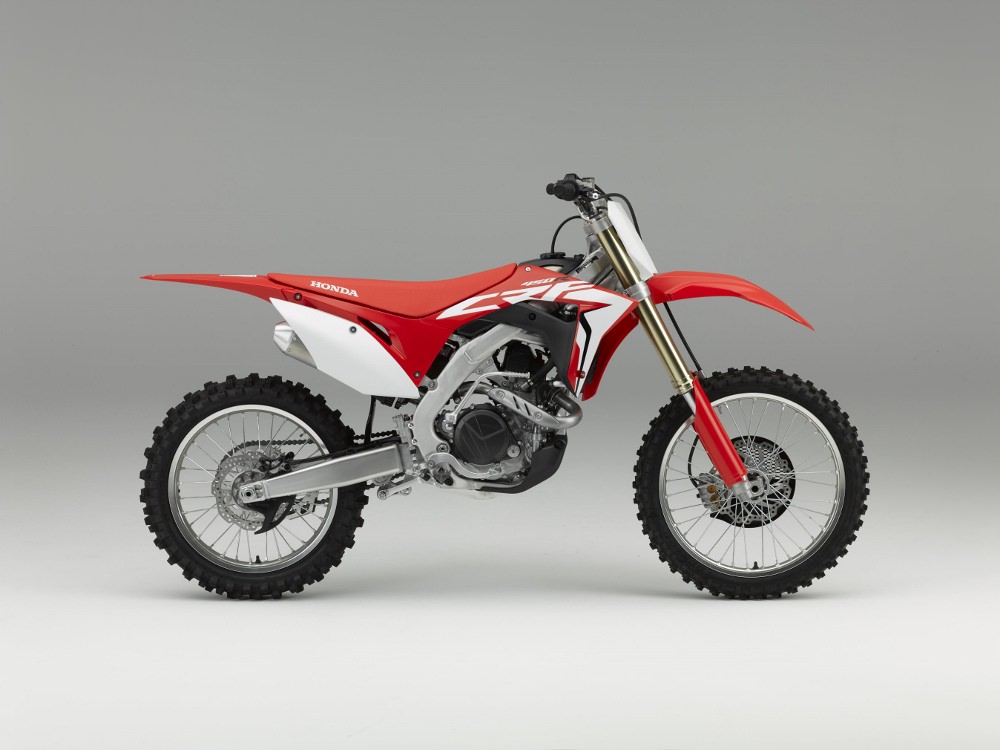 Everything about the new-from-the-ground-up 2017 CRF450R is designed for the absolute holeshot. A new Unicam engine offers increased power and torque across the rev range, thanks in part to an ultra-direct downdraft air intake, steeper valve angle and twin exhaust system with smoother routing. The chassis boasts new geometry and packaging that results in a more concentrated, lower center of mass, helping to get the power to the ground, maximize stability and improve cornering performance. The lighter aluminum frame has a narrower cross-section and a lighter, extruded aluminum rear subframe. The motorcycle is equipped with a coil-spring 49mm Showa fork, while the rear suspension comprises a lighter swingarm assembly and a shock with a lower mounting position. Dunlop Geomax MX3S tires come standard, and the CRF450R is the first mass-produced motocross bike ever to come with a titanium fuel tank. Electric start is available as an option. 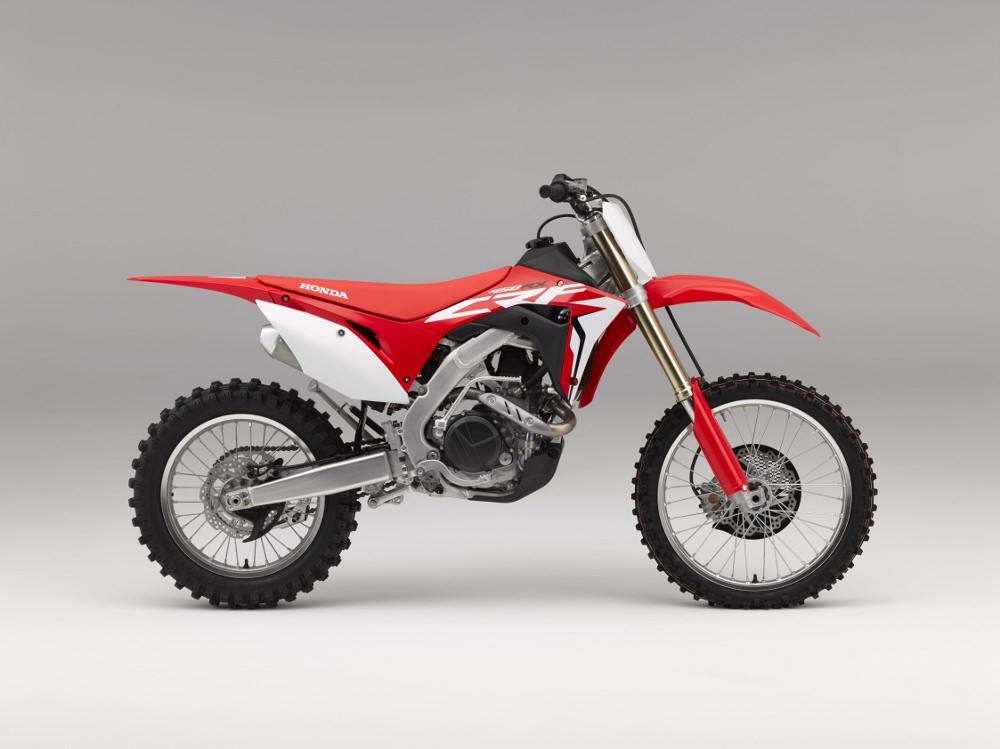 As a brand-new model, Honda’s CRF450RX boasts most of the features of its motocross-directed sibling, but in a package that’s designed for closed-course off-road riding and racing. Among the features that distinguish it from the CRF450R are a smoother ignition map and standard electric start (with kick-start backup), while chassis differences include off-road-focused suspension settings, a revised cylinder-head hanger and changed wheel hubs and axles. The CRF450RX also comes with off-road-appropriate components like a larger plastic fuel tank, forged-aluminum side stand, 18 inch rear rim and Dunlop Geomax AT81 tires, making it the ultimate weapon for events like those in the GNCC series. 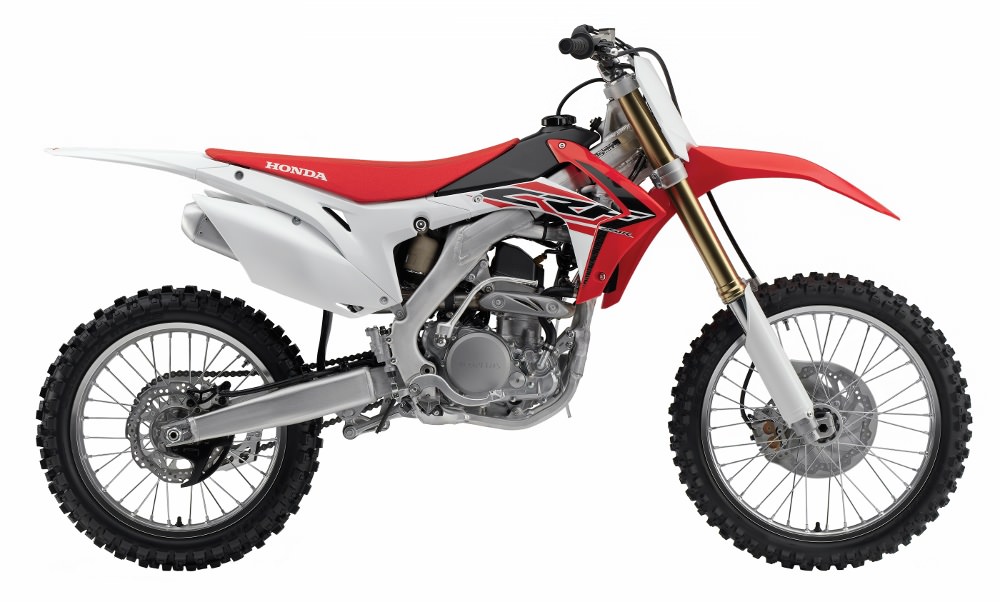 The bike that Malcolm Stewart took to the 2016 AMA Supercross 250SX East Region title returns for 2017 with a 49mm track-tuned Showa SFF-Air TAC fork and Showa shock, both of which offer a wide spectrum of adjustment and are designed to work at the highest level. With a race-proven chassis and Honda’s exclusive twin-muffler design, which efficiently centers the mass, the CRF250R is renowned for its deft handling. The high-compression 249cc Unicam engine provides an impressive spread of horsepower throughout the entire rpm range, and the bike comes with an engine-mode-select button that allows for three different power maps: Standard, Smooth and Aggressive. Custom maps can also be created with the available HRC tuning tool. 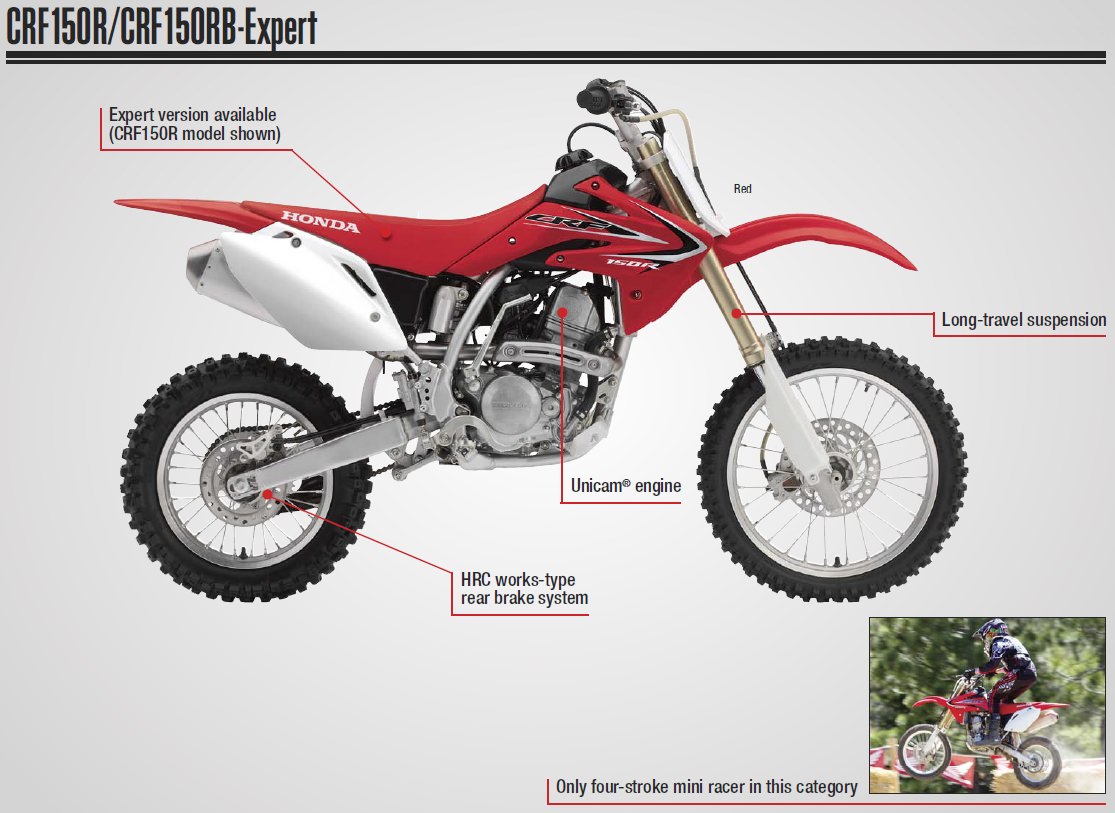 The only four-stroke machine in the competition mini motocross category, the CRF150R is what a young racer needs to achieve the next level. Currently campaigned in the amateur nationals by Amsoil Honda’s Carson Mumford, the CRF150R features a powerful-but-compact Unicam engine (based on those of the CRF250R and CRF450R) and race-tuned, fully adjustable Showa suspension, packaged in a track-designed chassis, all resulting in the highest level of performance. This model is available in a standard version and the CRF150RB, which accommodates bigger riders with its larger wheels, higher seat and longer swingarm. 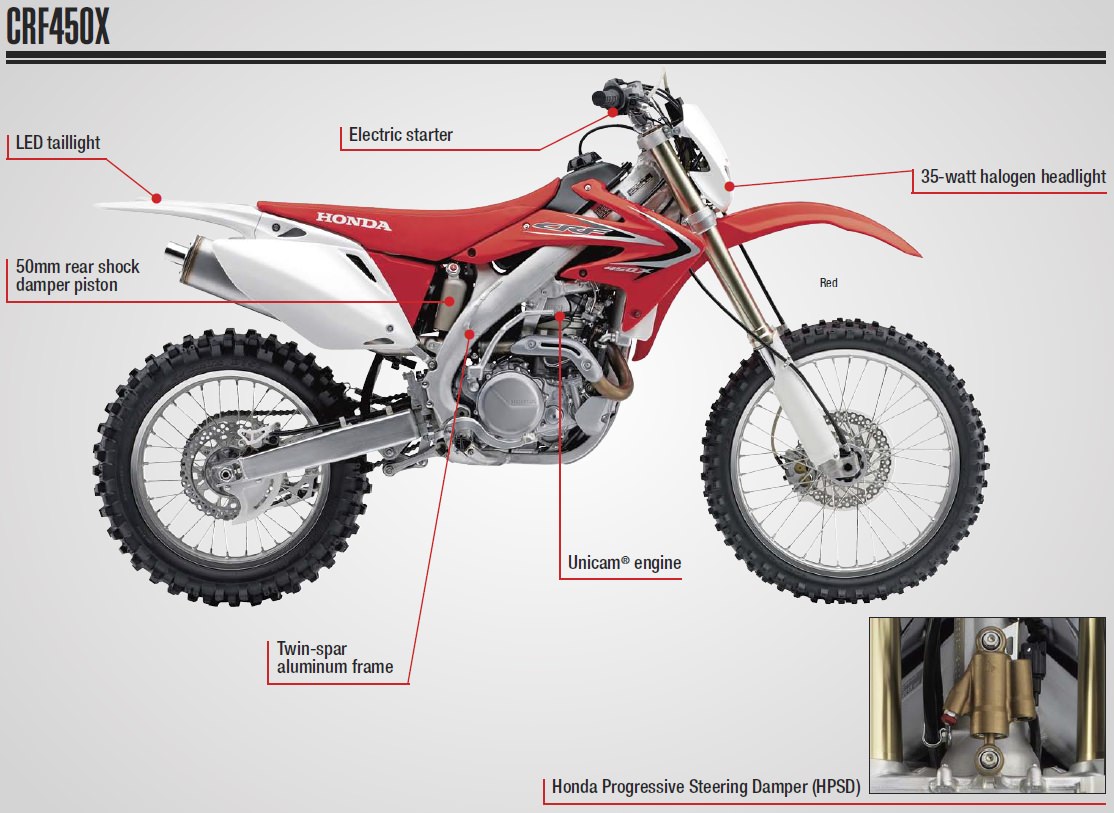 The off-road-focused X-model maintains Honda’s proven strength and durability. Since its release, the CRF450X has ruled the off-road scene with a long list of competition successes, including Team Ox Motorsports topping the 2015 Baja 1000 and Team JCR’s Ricky Brabec currently leading the 2016 NHHA series. The compact and reliable 449cc liquid-cooled four-stroke Unicam engine provides a smooth power delivery and plenty of low-end torque. Plush, works-style Showa suspension, a trail-tuned chassis and superior ergonomics enable impressive handling and feel in a variety of off-road terrain. The model also features the Honda Progressive Steering Damper, which aids cornering and helps to reduce arm fatigue, while the electric start helps ensure trouble-free starting in almost any condition. 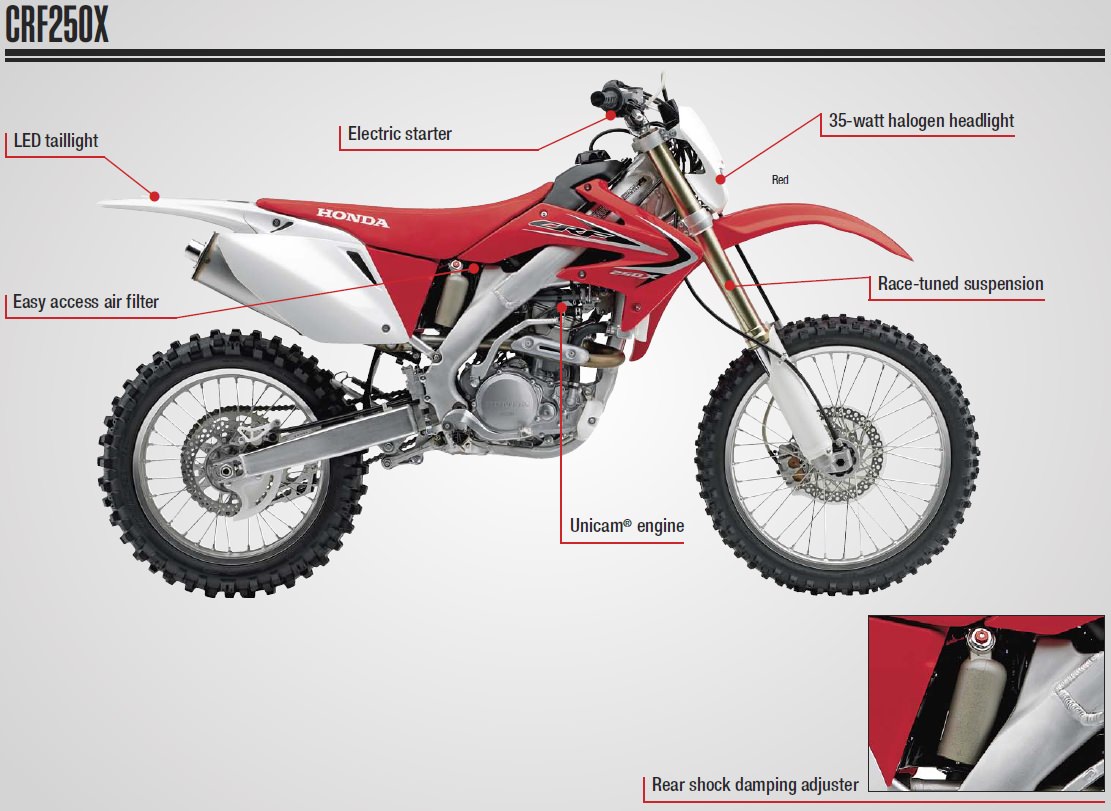 Like the CRF450X, Honda’s CRF250X has close ties to the competition R models and carries the same reputation for durability and performance. The lightweight and compact 249cc liquid-cooled, four-stroke Unicam engine, wide-ratio five-speed transmission and push-button electric start are set up specifically for off-road riding. Plush, predictable handling from the trail-tuned Showa suspension allows the bike to tackle even the roughest off-road terrain with ease. A hit with the off-road crowd, the CRF250X also features a headlight, taillight, trip meter and 18 inch rear wheel to further enhance the off-road experience.