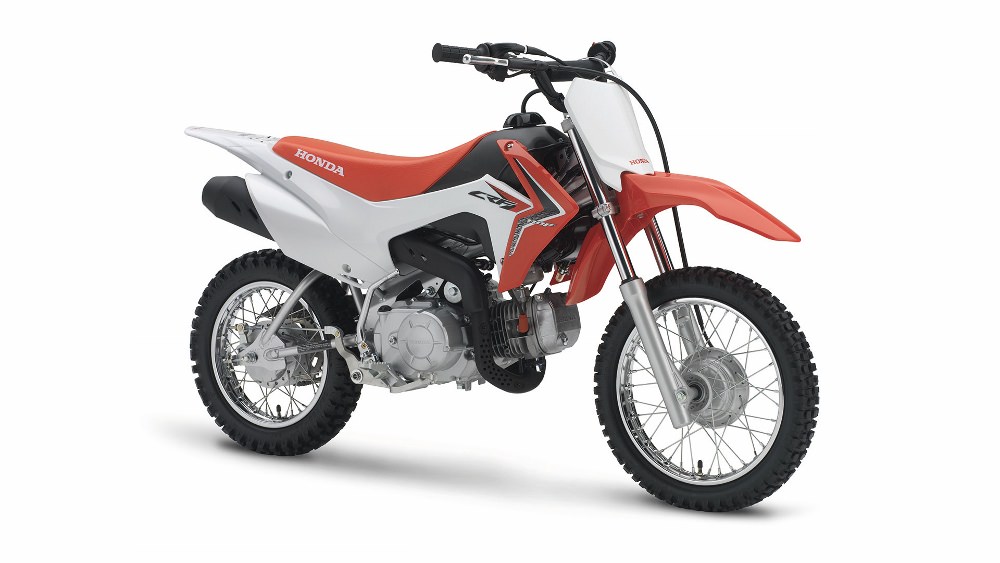 With its low seat height, modest size, and four-speed transmission with automatic clutch, the CRF110F fills an important entry spot among Honda’s family of off-road bikes. The 109cc powerplant is tuned to meet the needs of those new to riding, and with a throttle-limiter feature, it offers parents additional tuning options. Also, the CRF110F features a convenient electric starter plus race-inspired styling evocative of the awesome CFR450R and CRF250R motocross bikes. It all adds up to a great option for new riders.

What does the “automatic clutch” on the CRF110F mean exactly? The automatic clutch means you don’t have to worry about using a clutch to ride the machine. You do still have to change gears though and that’s where it confuses some people but thanks to the auto clutch you don’t have to worry about stalling the engine when coming to a complete stop nor do you have to use the clutch to change gears.

The youth market for off-road motorcycles is growing, and looks set to do so for the foreseeable future. These days riding off-road, in trail parks, motocross tracks or even back yards, can be very much a family activity that involves everyone.

It’s also a great, and enjoyable, introduction to motorcycling and readily builds skills and machine control, so useful later on whether out on the road or in competition. For Honda, acquiring young riders early in their careers is a great introduction to the brand, its core values and most importantly, its motorcycles.

Honda’s CRF110F is a brand new motorcycle, and replaces the popular CRF70F. It is aimed squarely at the 8-11 year old age range, and happily accommodates heights between 120-145cm and weights between 30-50kg. Primarily designed for leisure riding, it also provides a valuable stepping-stone up to more competition-focused motocross and enduro machines in the Honda range.

The CRF110F’s engine offers more power and torque, and also features an electric starter; a brand new steel frame with improved suspension also adds to the ‘big-bike’ feel and performance. With styling inspired by the 2013 CRF450R, the family resemblance is more than passing, further reinforcing the CRF110F’s appeal.

The automatic twin clutch system features two types of independent clutch – one for starting, the other for shifting – that makes changing gears easier and smoother than a conventional system. The transmission now also has four gears, instead of three. The engine start switch is on the right hand side of the handlebar, the engine stop switch is on the left.

A 1.2L airbox (the CRF70F used a 0.25L airbox) provides the much greater airflow that the larger capacity engine requires. The exhaust muffler cover is all new; partly for aesthetic reasons but also for improved protection. For more reliable performance digital ignition now gives the engine optimum ignition timing.

To make best use of the CRF110F’s extra power and torque a new chassis was required. The new steel backbone frame and swingarm blends a high balance of rigidity with a certain amount of tuned flex, allowing the rider to fully exploit the engine’s capabilities. The frame also incorporates safety covers at heat points, and carrying handles for easy transport.

The suspension has been completely uprated, for better traction and stability. The telescopic front fork diameter is 31mm, 4mm larger than the CRF70F and has 100mm of travel, while the rear shock absorber features a 28mm piston damper, up 7mm, with 90mm travel. Drum brakes front and rear provide ample, and measured braking force. The front wheel size is 14in with a 2.5 x 14 tire; the rear 12in with 3 x 12 tire.

A completely new body kit, with echoes of the CRF450R’s ‘triangle proportion’ gives the CRF110F a crisp and modern appearance. The newly designed chain cover looks great and with the addition of a handlebar pad aids safety. Wide-set footpegs increase control, and the redesigned kick-starter is easier to use. The 2017 CRF110F Seat height is 26.3 inches, 0.2 inches taller than the CRF70F – but the lowest in class – and the wheelbase is 7mm longer at 1070mm. Fuel capacity is 4.9L, and wet weight of the CRF110F is 163 lbs.