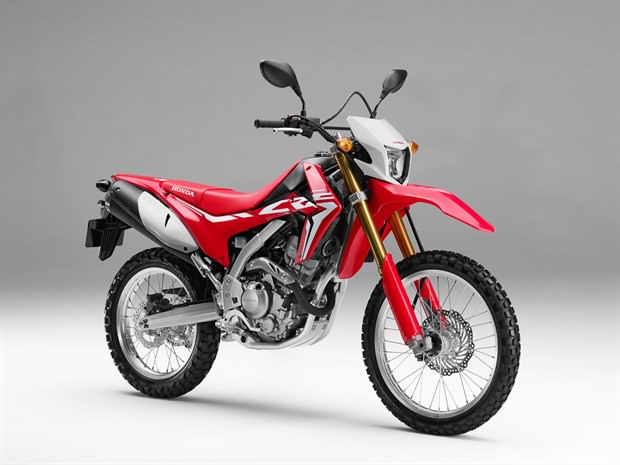 Another 2017 Motorcycle Announcement today from the 2016 EICMA show! This one covers Honda’s hottest selling dual-sport bike in many many years – the 2017 CRF250L! There’s been a lot of rumors and high-hopes floating around that Honda would bump up the engine displacement on the CRF250L and make it a CRF300L ever since Honda released the CBR300R back in 2015. Sadly, we go another year without getting that CRF300L we had all hoped for but the upside is that Honda did throw some changes at the CRF250L. I highly doubt the fact that it’s not a 300cc class machine for 2017 is going to knock a dent in its sales though as it continues to be month after month one of Honda’s best selling motorcycles out of the entire lineup since its debut back in 2013. Check out the details below though and let me know what you guys think, it’s always interesting to hear other’s opinions other than mine…

2017 CRF250L Changes VS 2016 CRF250L: Visually, it’s different thanks to new graphics that match those of the revolutionary 2017 CRF450R motocross machine. Technically, a 38mm throttle body (2mm up from 2016) combines with a revised airbox, reshaped air boot, new muffler design and a larger-diameter exhaust head pipe to provide improved response and better power in the low and midranges. There’s a new ECU as well, and the meter assembly, taillight and license-plate holder have all been updated as well. Euro-spec versions also get ABS now too.

A 250cc dual-purpose motorcycle covers many bases: it slips easily through congested city streets thanks to lightweight and slim proportions matched with superb maneuverability, while its suspension, ground reach and seat height deliver a fun and comfortable ride on rough tarmac and trails. It opens up a whole new range of two-wheeled opportunities, whatever the rider’s experience level. 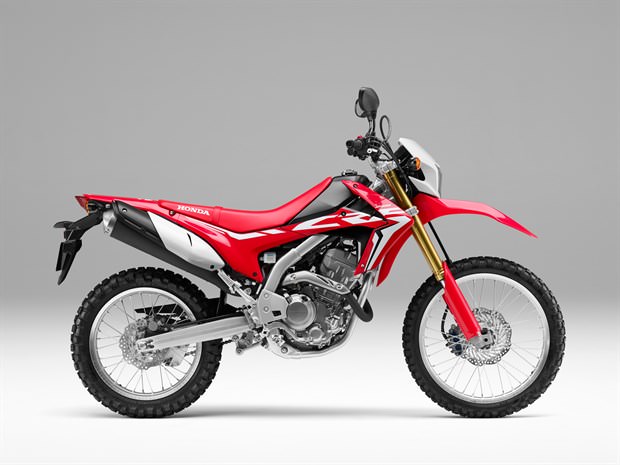 The Honda CRF250L, launched worldwide in Europe in 2012, is just such a machine. It’s found popularity with older riders – who often keep it as a second bike – while also connecting a younger demographic to Honda, many of whom use it as a cool, stylish alternative to a scooter. And for every owner, it offers the chance to head off the tarmac and on to the dirt. It was joined in 2014 by the supermoto-style CRF250M. For 2017 the CRF250L has been revised, while a new model, the CRF250 RALLY, adds an adventure-sport dynamic to the range.

With styling cues taken directly from Honda’s CRF250R and CRF450R MX machines, the new CRF250L is ready for anything a rider can throw at it: it’s tough, practical and equally at home around a city block or out on the trail.

“We really wanted to build on the success of the CRF250L with performance upgrades that open up even more new opportunities for riders young and old, no matter what kind of journey they want to tackle. So with the new machine we have improved the power, appearance and usefulness. We’ve also made sure it remains accessible to a wide variety of riders, as we know that for many the CRF250L will be the start of their motorcycling adventure.”

1B. Quick Overview of Specs / Features

Well proven, the CRF250L’s tough steel frame and long travel Showa suspension remain unchanged, but new bodywork draws its influence from the minimalism for the CRF450R MX for a sharper, slimmed-down look. A digital dash adds a tachometer and fuel gauge and ABS is fitted as standard, with the option of disengaging it for the rear brake.

The 249cc engine boasts more bottom-end torque and peak power from revised PGM-FI and throttle body plus a new airbox, connector tube and lightweight exhaust. It is also EURO4 compliant.

The CRF250L is a true small capacity all-rounder, and as such is built so form and function seamlessly intertwine. Its slim width not only helps it in traffic, but also off-road where the smooth seat/tank interface also allows the rider to transfer their weight freely.

Cohesively laid out, the new digital dash features a speedometer, tachometer plus fuel gauge and clock. Much more compact than the previous design, the rear light, indicators and number plate bracket tuck neatly out of harm’s way.

The CRF250L comes finished in Honda’s Extreme Red racing color as a base, with black and white accents drawn directly from HRC’s factory machines.

The CRF250L’s frame is constructed from steel, with twin oval-section main spars and a semi-double cradle. A wheelbase of 56.8 inches is matched to a 27.6°’ rake with 113mm trail and ground clearance of 10 inches. Seat height is 34.4 inch with a curb weight of 322 lbs. 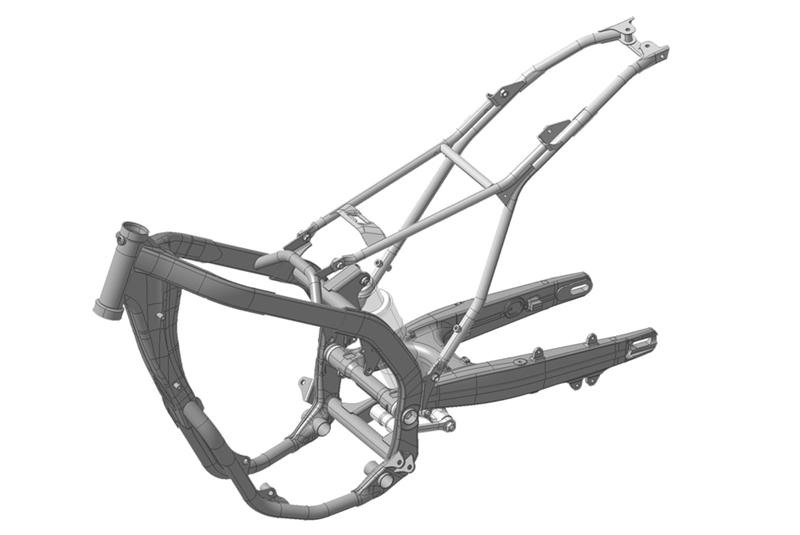 A 43mm Showa inverted fork has 250mm of stroke: light weight and rigid, one side houses the spring while the other provides damping control. A 17mm front wheel spindle (2mm larger in diameter) improves rigidity and handling feel. Pro-Link rear suspension features a 240mm axle stroke; the Showa shock absorber is a single tube design with 40mm diameter cylinder.

Up front, a 256mm floating wave-style disc is worked by a two-piston caliper. Two channel ABS is fitted as standard and gives the rider the option to switch it off for the rear caliper. Aluminum rims (21-inch front/18 rear) wear block pattern tires (front: 3.00-21 51P, rear: 120/80-18M/C 62P). A small detail – but a useful one off-road – is that the gear lever now features a folding tip. 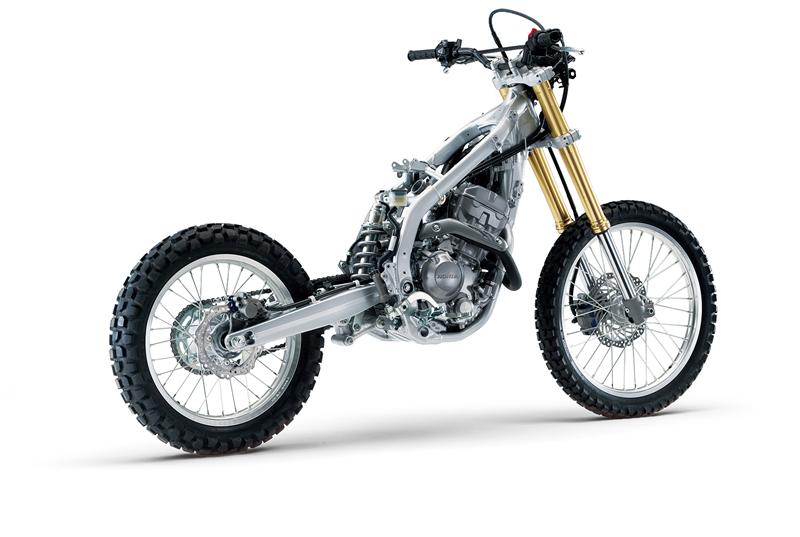 Revised PGM-FI feeds fuel/air mixture through a 38mm throttle body (up from 36mm) and draws air from the airbox via a direct connecting tube. The exhaust muffler has a diameter of 115mm, houses the catalyser and uses two chambers: it’s 450g lighter than the previous design and a larger bore downpipe helps the engine breathe and make more power.

The engine uses a compact roller/rocker arm valve train and cylinder head, with bore and stroke of 76 x 55mm. An offset cylinder reduces frictional losses while the piston itself incorporates a special surface material, plus a molybdenum coating. The oil pump features an internal relief structure that prevents aeration of relieved oil.

The crank journal employs a half-split, press-fit metal bearing while the crank bearing uses a cast-iron bush, reducing weight, smoothing the engine and strengthening the rigidity of the case housing, minimizing the internal diameter change due to thermal expansion.

A primary balance shaft further reduces vibration and the six-speed gearbox and clutch are manufactured to cope with the extra stress of riding off-road. The 10.7 kW heat-release radiator features a thin guide-ring cooling fan to maintain even temperatures at low speeds.

The CRF250L engine is EURO4 compliant.