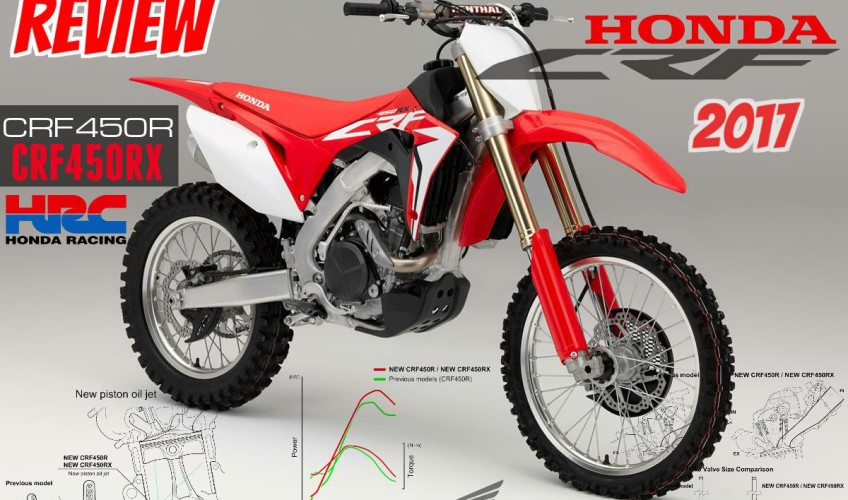 Well well well… As I mentioned in a previous blog post here, I said we would be releasing a new 2017 motorcycle announcement today (August 11, 2016). It’s been killing me to officially let the cat out of the bag as this model change-up is a BIG deal! The CRF450RX previously known as the CRF450X up until 2016 now shares the same platform as the 17′ CRF450R including engine, frame, suspension etc. 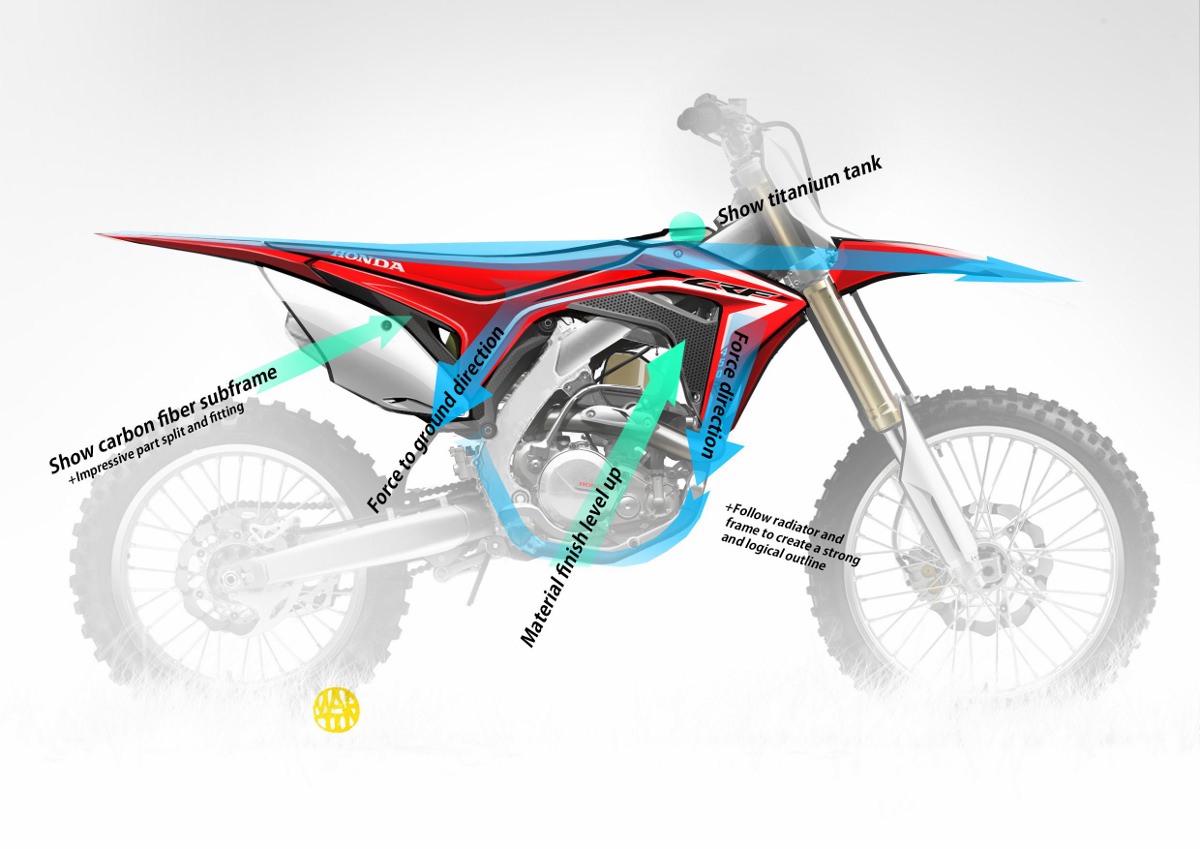 “The CRF450RX is a pure, race-ready enduro tool like nothing else Honda has ever made. It uses the greatly improved performance of the brand new CRF450R and we made no sacrifices in producing this ‘RX’ enduro version, which offers something completely new to expert riders everywhere. It is built to win straight from the crate, at the highest level of competition.”

Alongside the CRF450R, Honda can now also provide enduro riders with a race-ready machine – the new CRF450RX. Sharing the CRF450R’s new engine and frame package, the CRF450RX has crucial changes to create an uncompromising enduro focus.

The All-New 2017 CRF450RX takes some features from the CRF450X and CRF450R, puts them together to give you everything you could ever want out of an enduro bike or just to have the baddest true trail bike that isn’t a full-bore motocross / supercross race bike like the R variant of the CRF450. If you wanted a truly bad and insane off-road motorcycle for the trails in the last decade, you had to buy the CRF450R and have a compromise here and there and or swap parts out to make it more friendly if you weren’t racing it – WFO everywhere! Still don’t need something that is this track and race orientated? Honda is keeping the CRF450X around for 2017 as it is still a very potent package for more than the average woods enthusiast.

Among the features that distinguish it from the CRF450R are a smoother ignition map and standard electric start (with kick-start backup), while chassis differences include off-road-focused suspension settings, a revised cylinder-head hanger and changed wheel hubs and axles. The CRF450RX also comes with off-road-appropriate components like a larger plastic fuel tank, forged-aluminum side stand, 18 inch rear rim and Dunlop Geomax AT81 tires, making it the ultimate weapon for events like those in the GNCC series.

Electric and Kick Start
Talk about the best of both worlds: The new 2017 CRF450RX comes with both a kick- and electric-starting system as standard equipment. Having both options will ensure faster GNCC starts for the ultimate holeshot.

260mm Front Brake
The CRF450RX’s large front-brake disc measures a whopping 260mm. You get great brake feel and a wave pattern that cuts down on weight. Front and rear brake-disc guards are part of the package, and are sure to be popular with off-road riders.

Skid Plate
A factory skid plate is light and offers the engine and lower-frame protection that a motocross racer demands. The smooth contours help keep you from getting hung up on logs and rocks, too.

Kickstand
It seems like a small detail, but off-road bikes can sometimes need a kickstand. Which is exactly why you’ll find this light, compact unit added right from the factory.

Large Fuel Tank
Stopping for fuel in a race costs time. With the CRF450RX’s 2.2-gallon fuel tank, depending on the course and how much roost you’re making everyone else eat, it’s possible to make it through a three-hour enduro with just one fuel stop.

Engine Mode Select Button
This simple, handlebar-mounted button lets you dial in engine power delivery character with a push of your thumb. Choose between Standard, Smooth, and Aggressive, depending on course conditions.

18-Inch Rear Wheel
An 18-inch rear wheel is another indication of the CRF450RX’s off-road heritage. Whether it’s red Georgia clay, Florida loam, or Baja sand and rocks, you’re going to find this bike offers the performance you need.

Off-Road Suspension with Spring Fork
Designed specifically for the demands of off-road riding, the CRF450RX’s new Showa Spring Fork and suspension components are fully adjustable and chosen to give you the ultimate tunability and performance in the field for changing conditions.

New Dual-Muffler Exhaust System
The CRF450RX’s dual exhaust system is compact and positioned closer and lower in the frame’s center to take weight off the rear end and bring more mass to the bike’s center for superior handling.

Dunlop Geomax Off-Road Tires
The new Geomax AT81 tires are specially designed for off-road riding, and help the new CRF450RX hook up and put its holeshot traction to the ground.

New Aluminum Frame
Our twin spar aluminum frame positions the rear shock’s mounting point low, opening up the airbox area and contributing to a lower center of gravity. The frame geometry also helps give you more traction, and that means more holeshots!

New Flywheel
Off-road riders want smooth power delivery that gives the engine’s revving character, better matching it for tougher terrain. That’s why the new CRF450RX gets a special flywheel tuned for off-road use.

Cylinder Head Layout
The 2017 CRF450RX uses a new “in-finger” rocker design. The efficient Unicam cylinder head gives you the design and performance of a double-overhead-cam layout but the compactness of a single-overhead-cam design.

Scavenge Pump
Deep in the engine, there’s a new oil scavenge pump. You may never see it, but it helps keep the CRF450RX’s overall design compact.

Everything about the new-from-the-ground-up 2017 CRF450R is designed for the absolute holeshot. A new Unicam engine offers increased horsepower to the tune of an 11% increase as well as added torque across the rev range, thanks in part to an ultra-direct downdraft air intake, steeper valve angle and twin exhaust system with smoother routing. The chassis boasts new geometry and packaging that results in a more concentrated, lower center of mass, helping to get the power to the ground, maximize stability and improve cornering performance. The lighter aluminum frame has a narrower cross-section and a lighter, extruded aluminum rear subframe. The motorcycle is equipped with a coil-spring 49mm Showa fork, while the rear suspension comprises a lighter swingarm assembly and a shock with a lower mounting position. Dunlop Geomax MX3S tires come standard, and the CRF450R is the first mass-produced motocross bike ever to come with a titanium fuel tank.

Want to make life easy for you on your 2017 CRF450R? How does electric start sound? It is now an option for the first time ever on Honda’s CRF-R models including the CRF150R, CRF250R and of course the CRF450R.

Downdraft Fuel Injection
Part of an entire engine overhaul for 2017, the new downdraft intake tract and FI body help and increase both power and fuel-metering precision. It’s part of the reason the CRF450R offers such explosive power and massive torque, especially out of the starting gate and in the critical first 100 feet of the race to the first turn.

New Cylinder Head Layout
This year the new 2017 CRF450R uses a new “in-finger” rocker design. The Unicam cylinder head remains the most efficient in the MX world, giving you the design and performance of a double-overhead-cam layout but the compactness of a single-overhead-cam design.

New “In Molded” Graphics
With the all the time you’ll be spending in victory circle, you need to look your best. The new CRF450R has you covered. New “in molded” graphics look great, and stay looking good longer.

Skid Plate
A factory skid plate is light and offers the engine and lower-frame protection that a racer demands.

Updated Twin-Muffler Exhaust System
The CRF450R’s dual exhaust system is even more compact for 2017 and positioned closer and lower in the frame’s center to take weight off the rear end and bring more mass to the bike’s center for improved handling. It also allows for more air flow, and that equals added horsepower.

Electric-Start Option
Looking for an awesome new option? Check out the electric-start kit available for the first time on the new CRF450R!

260mm Front Brake
The CRF450R’s large front-brake disc measures a whopping 260mm. You get great brake feel and a wave pattern that cuts down on weight. Front and rear brake-disc guards are part of the package too.

Titanium Fuel Tank
Grams and performance count, and the 2017 CRF450R makes a big switch to a titanium fuel tank this year. Light and strong, it’s also thinner than our previous plastic unit, while maintaining the same capacity, freeing up more space and helping to centralize fuel mass.

Engine Mode Select Button
This new simple handlebar-mounted button lets you dial in engine power delivery character with a push of your thumb. Choose between Standard, Smooth and Aggressive, depending on track conditions.

New Scavenge Pump
Deep in the engine, there’s a new oil scavenge pump. You may never see it, but it helps keep the CRF450R’s overall design.

Flatter Seat/Tank Junction
The new 2017 CRF450R features a new, flatter seat/tank junction, including a new titanium fuel tank. The improved ergonomics make it easier to move forward and back on the bike, increasing your control.