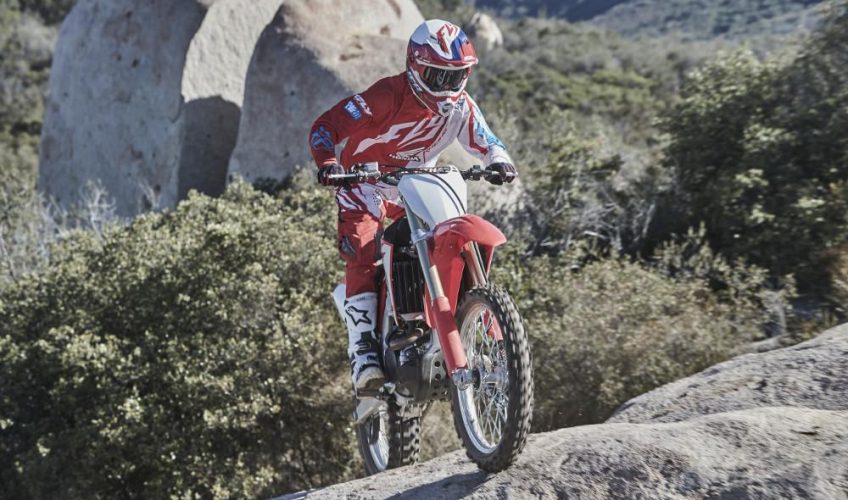 Thankfully, not too horribly bad at all though coming in at $9,249. Bang for the buck it’s hard to beat when you compare it against the 2017 CRF450X at $8,440 but it all boils down to what you need and want in the grand scheme of things as no matter which way you look at it. That’s a lot of money. If you would’ve asked me 10 years ago if I thought any of Honda’s dirt bikes would be knocking on $10,000, I would have told you “you’re crazy!” haha but then again look at how far technology has came.

Talk about the best of both worlds: The new 2017 CRF450RX comes with both a kick- and electric-starting system as standard equipment. Having both options will ensure faster GNCC starts for the ultimate holeshot.

The CRF450RX’s large front-brake disc measures a whopping 260mm. You get great brake feel and a wave pattern that cuts down on weight. Front and rear brake-disc guards are part of the package, and are sure to be popular with off-road riders.

A factory skid plate is light and offers the engine and lower-frame protection that a motocross racer demands. The smooth contours help keep you from getting hung up on logs and rocks, too.

It seems like a small detail, but off-road bikes can sometimes need a kickstand. Which is exactly why you’ll find this light, compact unit added right from the factory.

Stopping for fuel in a race costs time. With the CRF450RX’s 2.2-gallon fuel tank, depending on the course and how much roost you’re making everyone else eat, it’s possible to make it through a three-hour enduro with just one fuel stop.

This simple, handlebar-mounted button lets you dial in engine power delivery character with a push of your thumb. Choose between Standard, Smooth, and Aggressive, depending on course conditions.

An 18-inch rear wheel is another indication of the CRF450RX’s off-road heritage. Whether it’s red Georgia clay, Florida loam, or Baja sand and rocks, you’re going to find this bike offers the performance you need.

Designed specifically for the demands of off-road riding, the CRF450RX’s new Showa Spring Fork and suspension components are fully adjustable and chosen to give you the ultimate tunability and performance in the field for changing conditions.

The CRF450RX’s dual exhaust system is compact and positioned closer and lower in the frame’s center to take weight off the rear end and bring more mass to the bike’s center for superior handling.

The new Geomax AT81 tires are specially designed for off-road riding, and help the new CRF450RX hook up and put its holeshot traction to the ground.

Our twin spar aluminum frame positions the rear shock’s mounting point low, opening up the airbox area and contributing to a lower center of gravity. The frame geometry also helps give you more traction, and that means more holeshots!

The 2017 CRF450RX uses a new “in-finger” rocker design. The efficient Unicam cylinder head gives you the design and performance of a double-overhead-cam layout but the compactness of a single-overhead-cam design.

Deep in the engine, there’s a new oil scavenge pump. You may never see it, but it helps keep the CRF450RX’s overall design compact.