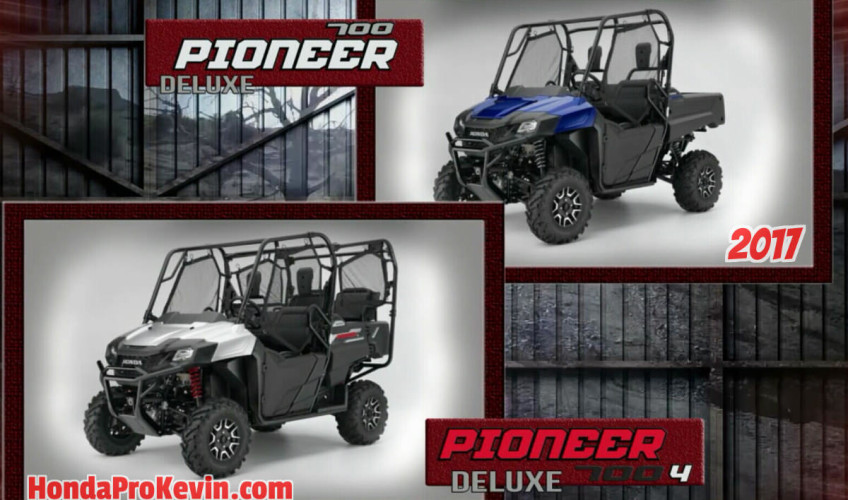 Today: July 14, 2016 Honda has officially let the cat out of the bag on the following models:

Honda when announcing the date for the 2017 1000cc side by side announcement date made a statement that is something you should be excited about… What is this you may be asking? Honda stated that there’s a “Full model change that’s a true GAME CHANGER!”. Will this be the 2017 1000 cc Sport side by side / UTV that we’ve all been dreaming about? Will Honda release a reliable sport side by side with big horsepower to go toe-to-toe with Polaris, Yamaha, Can-Am etc for 2017? They could be referring to another model segment but only time will tell… The upside though is that November is only a few months away for the next 2017 side by side announcement and then the next motorcycle model lineup announcement will take place on August 11th and then we’ll know more. Want to be the first to know? Follow my Blog for more updates. 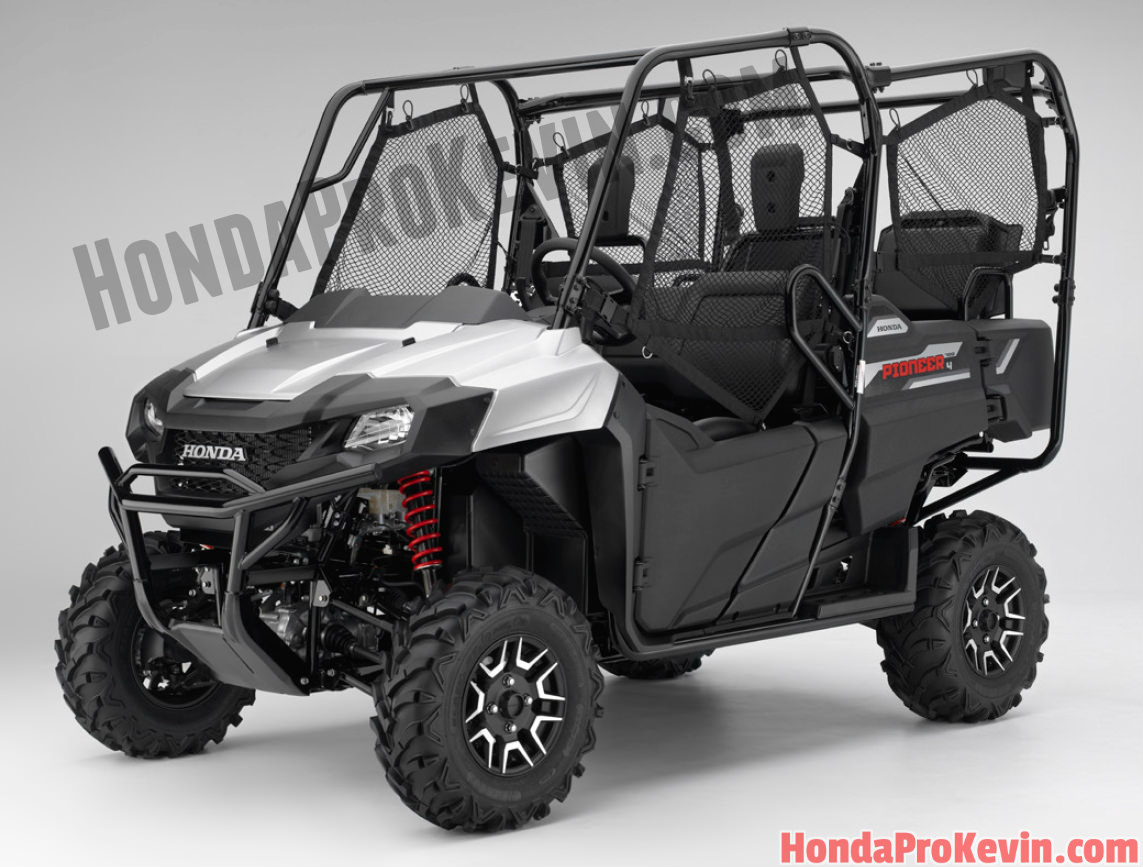 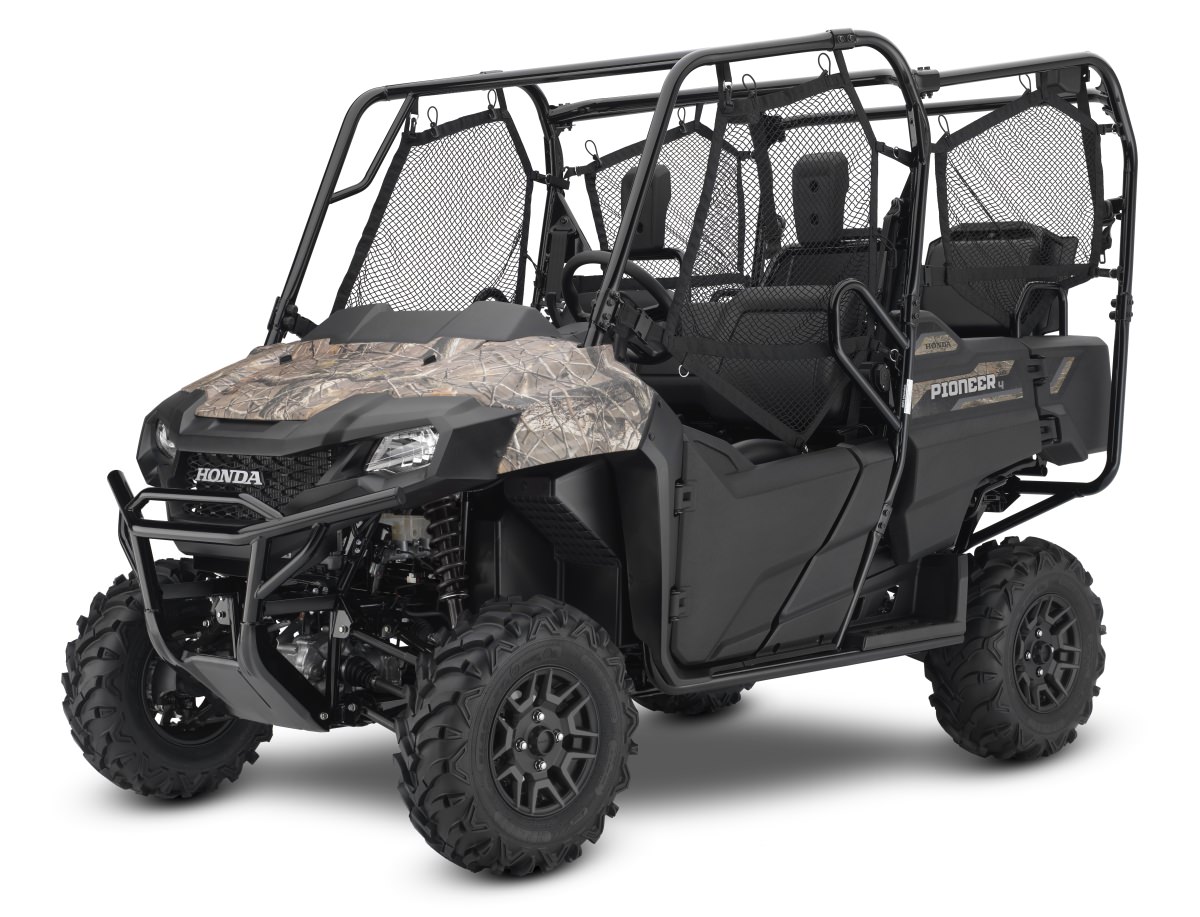 The Deluxe model brings you paddle shifters with the option of flipping from Automatic to Manual Shift so you can hold a certain gear etc. The Deluxe Pioneer 700 & 700-4 also give you EPS (Electric Power Steering). It bumps the fun factor up another notch with the Pioneer 700 side by side models as to me the automatic transmission can get boring from time to time. Don’t get me wrong, an automatic is nice to have from time to time but I’d rather sacrifice the comfort of an automatic transmission for the fun of having paddle shifters but thankfully for 2017 you don’t have to weigh out the pros and cons as to which model to get based solely on its transmission.

Painted Plastics / Body Panels for the 2017 Pioneer 700 & 700-4 Deluxe models too! That’s one interesting tidbit of information that can easily get lost in the other new changes for the Pioneer 700 models but to me that’s a biggie! As anyone that has owned an ATV or side by side / SxS / UTC etc over the years no matter what brand it is, keeping the plastics looking good after that first trip in the woods is next to impossible! Thanks to them being painted now, it’s going to be a lot easier to keep looking good years down the road. Honda is also doing this for the first time on the 2017 FourTrax Foreman Rubicon Deluxe. 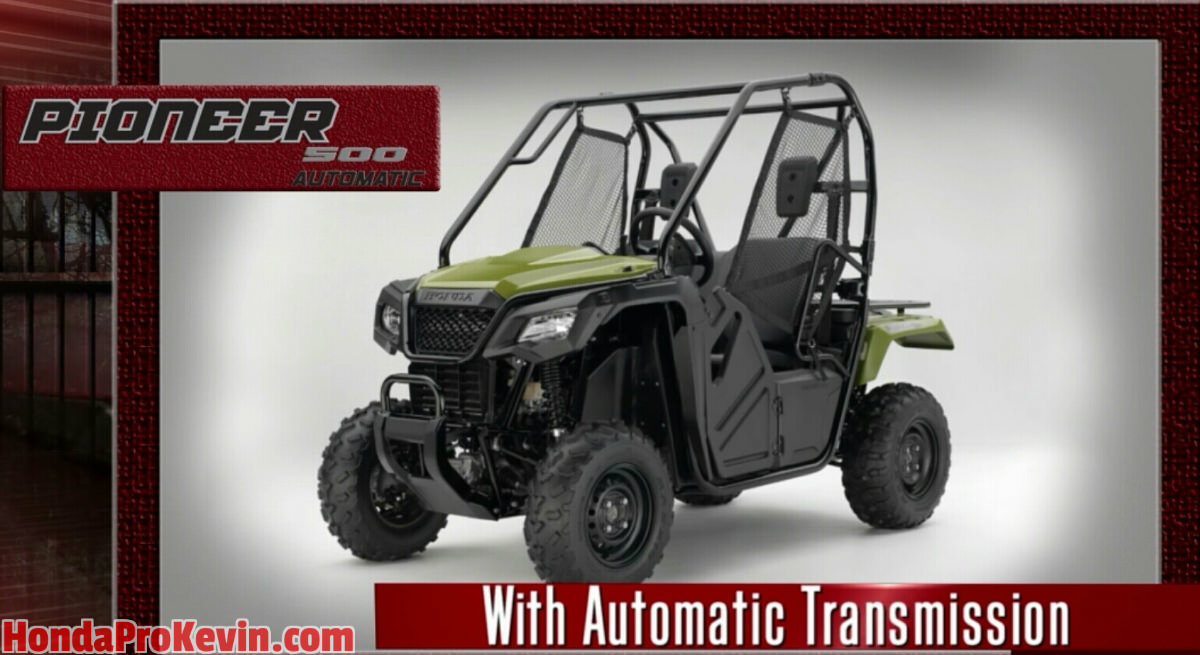 Now, let’s get to the 2017 Pioneer 500. The Pioneer 500 is now available with the same style MT / AT Automatic Transmission that I mentioned above for the 700. From 2015 – 2016, the Pioneer 500 was only available with a Manual Transmission to where you always had to change gears by clicking up and down via the paddle shifters. Personally, I loved that feature but we did have a lot of people that wanted an Automatic Transmission option on the Pioneer 500 so Honda decided to listen to feedback from customers. The upside now is that you get the best of both worlds, the automatic feature for when you don’t want to change gears and then when you want to have a little fun and wring her neck it bumps the fun factor up a notch when you can hold each gear as long as you want without a computer controlling it. The Pioneer 500 also received another upgrade in the suspension department with new dual-rate springs offer a smoother and better ride with more confidence in overall handling.

Below… You’ll find a breakdown on all of the changes for both the 2017 Pioneer 700 & 500 models and what the new Deluxe feature gives you a little further down the page. 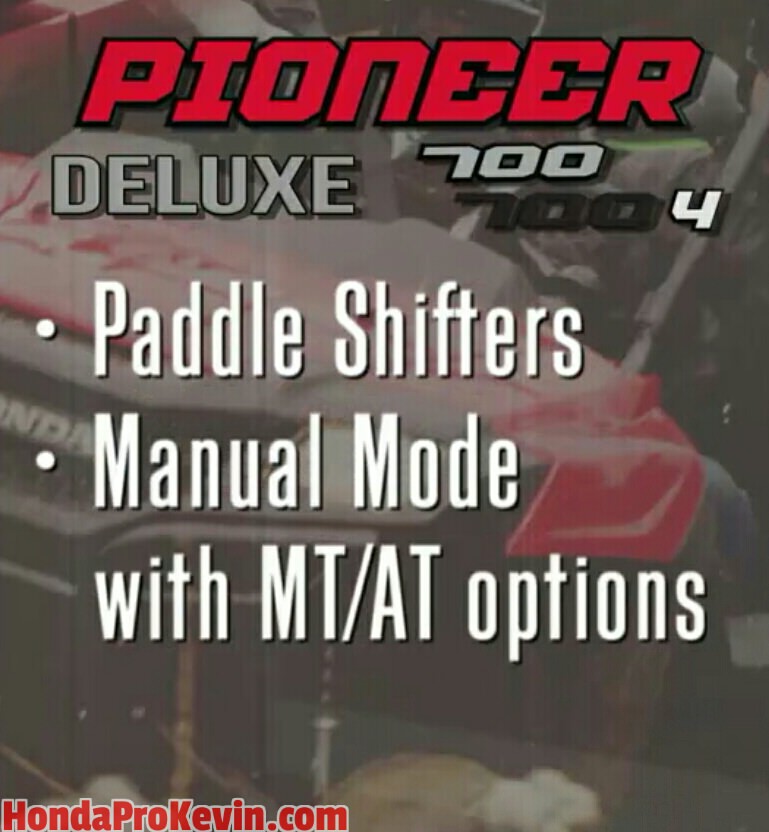 The 2017 Honda Pioneer 1000 / 1000-5 model lineup information regarding specs and or any possible changes & upgrades will not be released until November.

If you follow my blog here at HondaProKevin.com then you would have seen that I pegged this 2017 side by side release date over a month ago as well as many other new model releases, news etc before any other online publication. Want the latest 2017 Pioneer 1000 side by side News / Updates? Subscribe and follow my blog for the latest info!

I’ll be covering these details more in depth shortly… 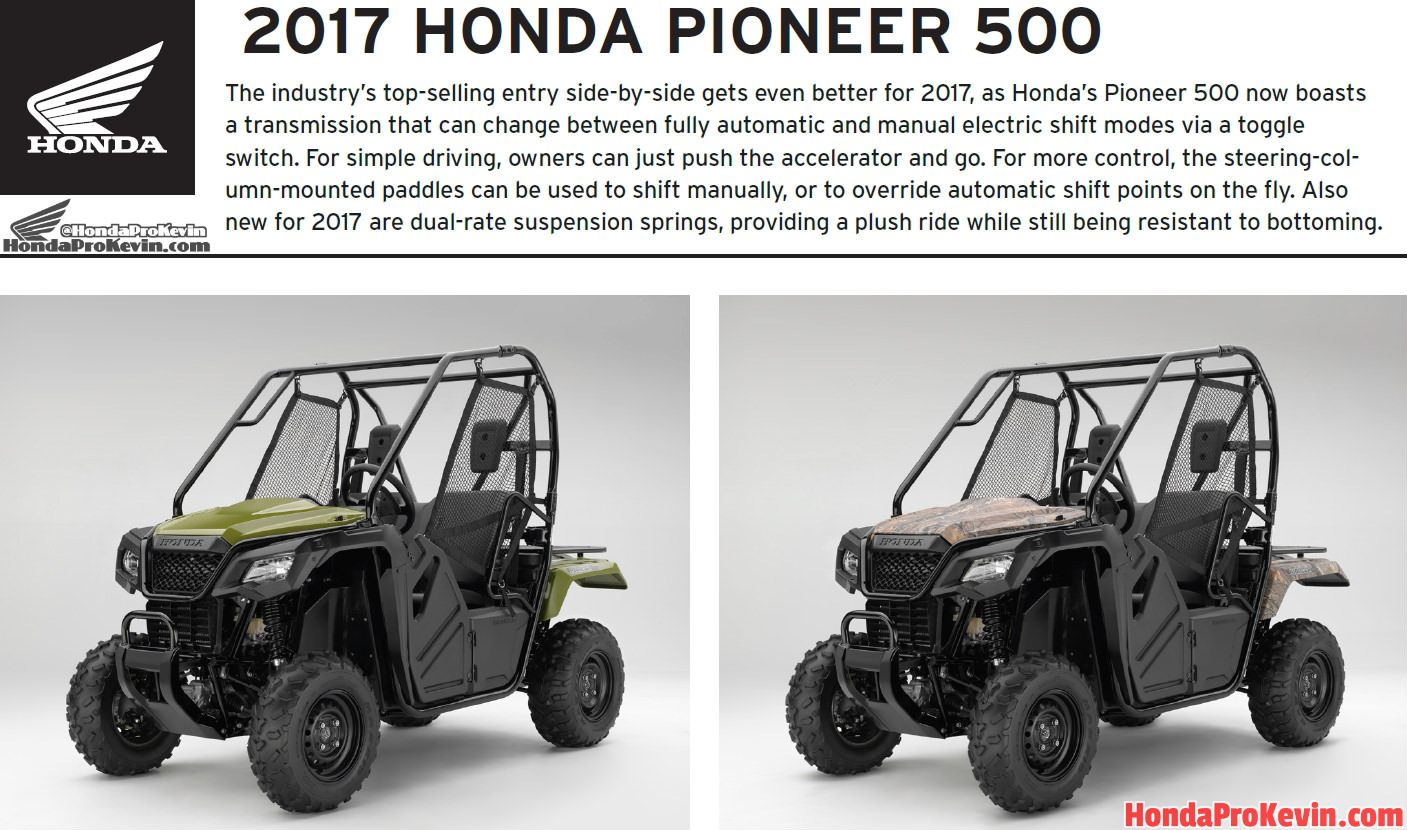 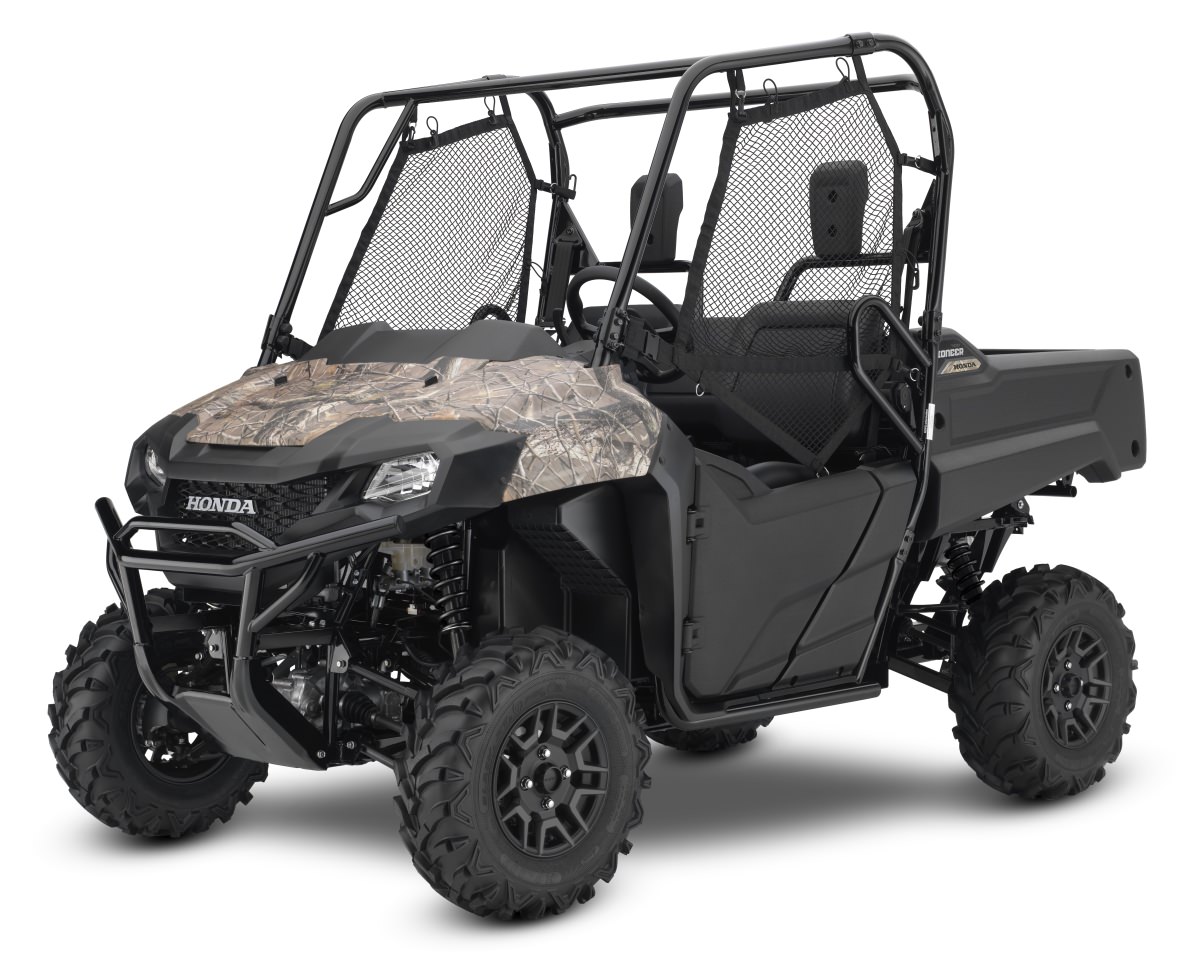 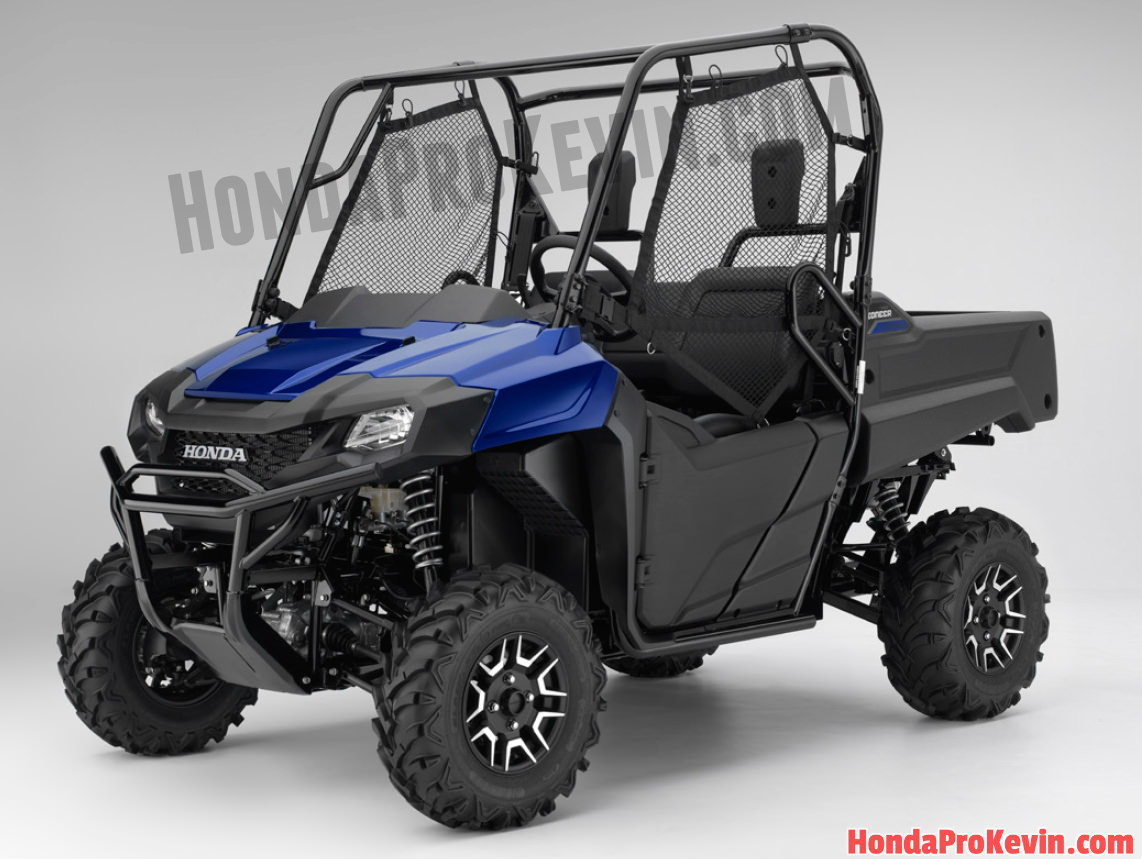 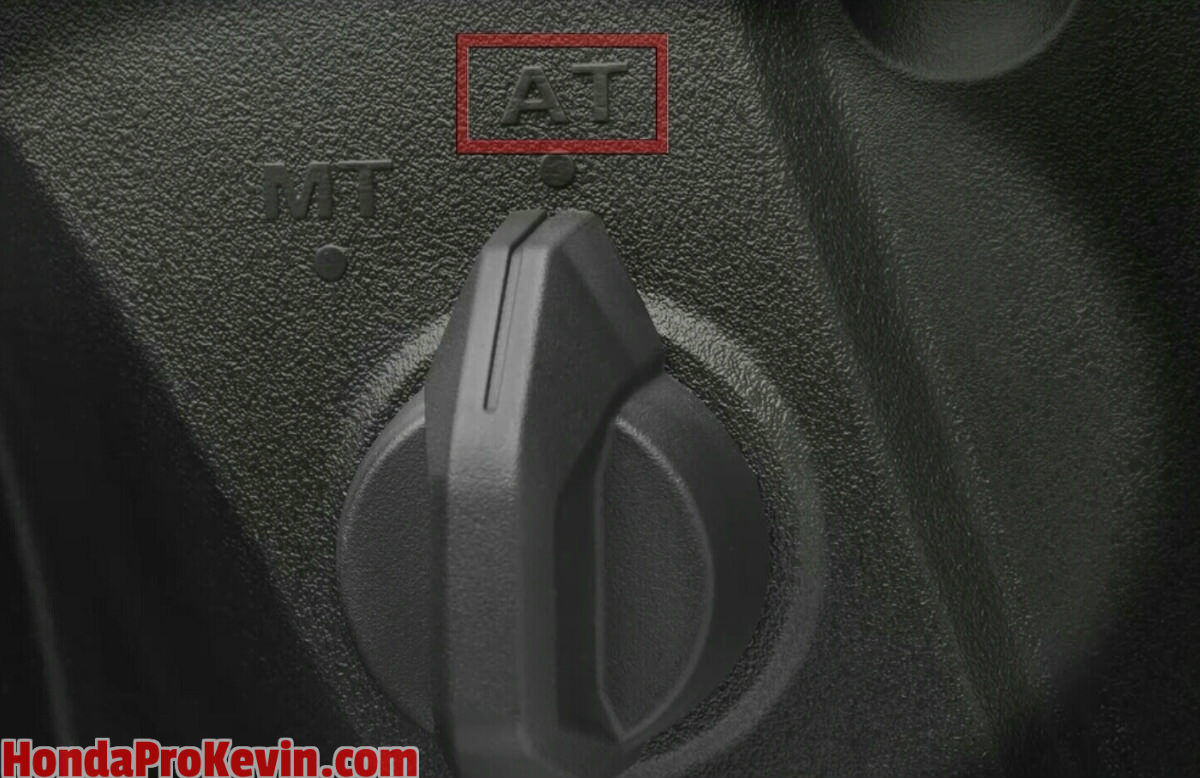 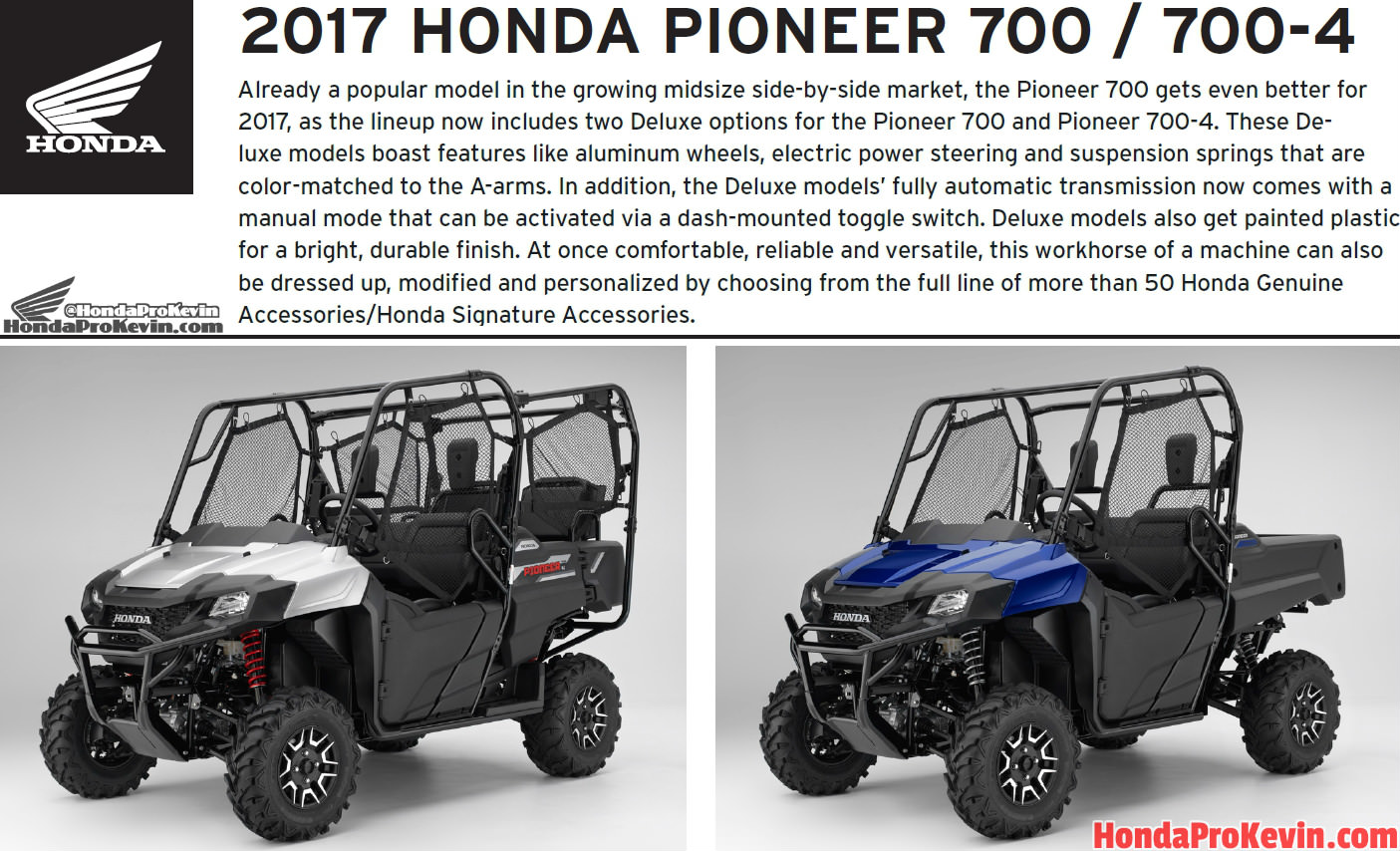 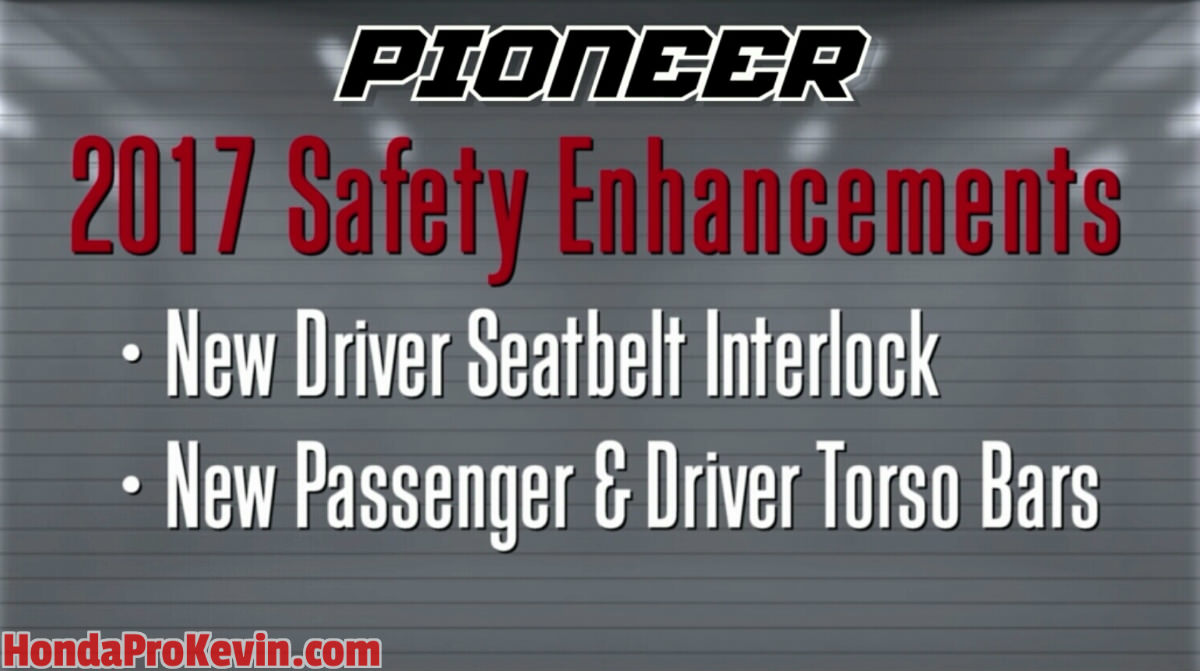 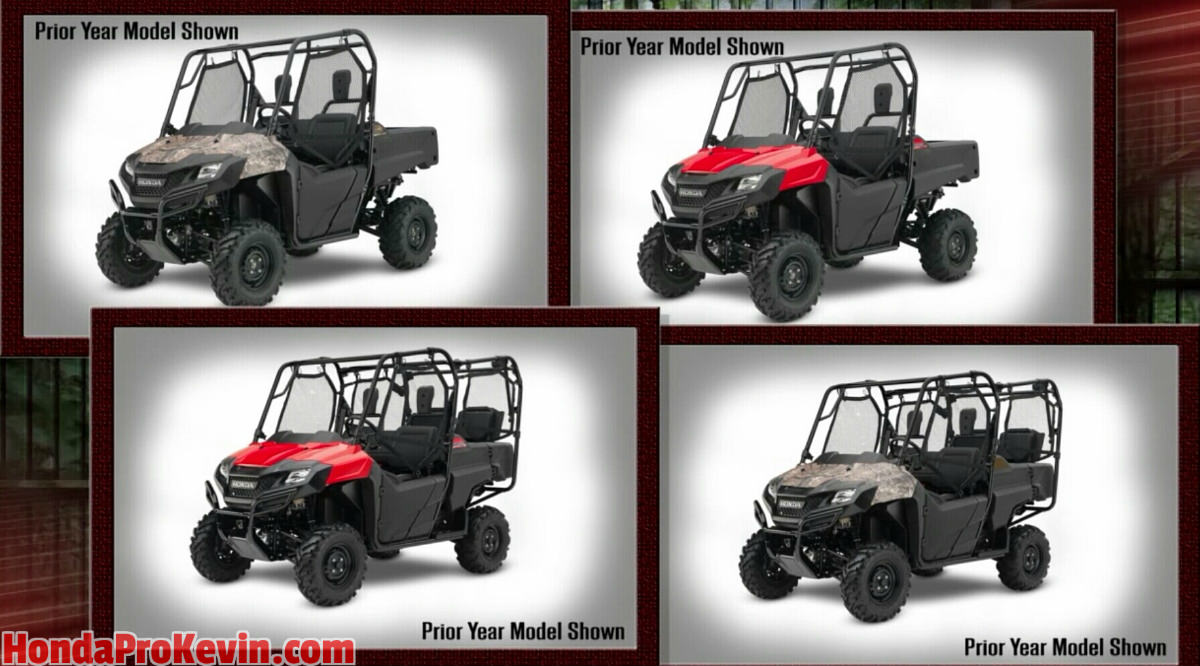 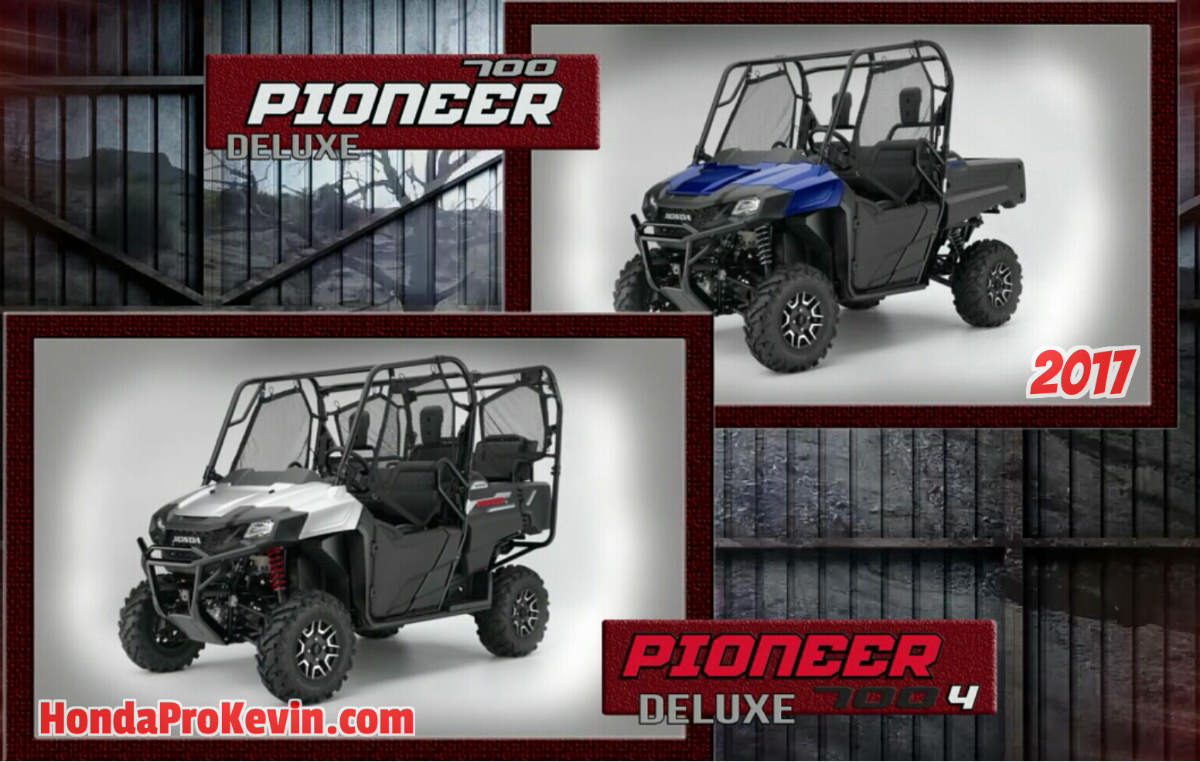 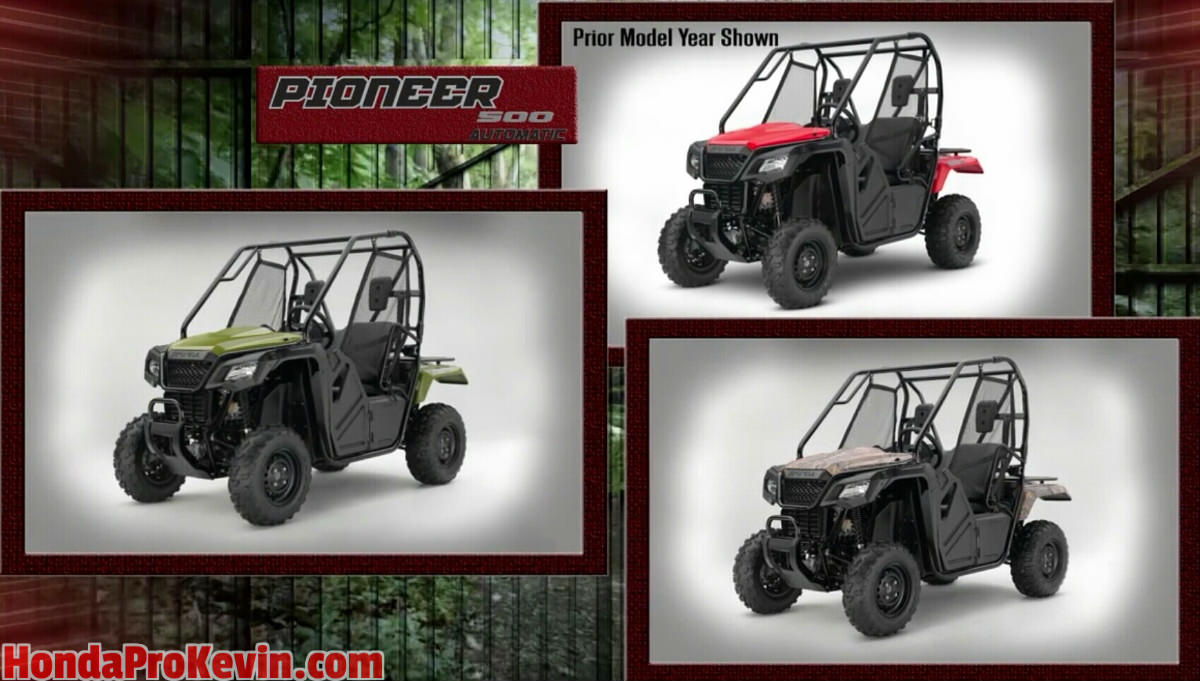