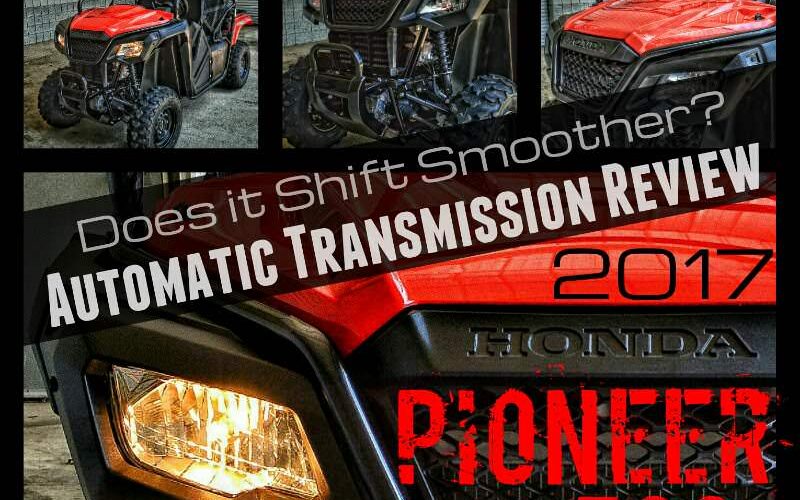 The 2017 Pioneer 500 received a few changes this year… What changes? You can read about them all more in-depth with Specs, Pictures, Videos etc by Clicking Here.

One of the major changes to the 2017 Pioneer 500 is the much-welcomed Automatic / Manual mode selector to where you can flip from fully Automatic to Manual and use the Paddle Shifters like the original 2015 – 2016 Pioneer 500. There’s been a few people who thought the Manual gear changes were a little “rough” on the previous generation Pioneer 500. Being 100% honest, they weren’t the smoothest in the world if you hop in it when the engine and transmission is cold and tear out on it flipping through the gears. Once everything was up to temperature, it is noticeably smoother but it still left a little something to be desired for some people.

Is the Automatic mode on the 2017 Pioneer 500 any smoother? Check out the video below and let’s go for a quick spin and find out…

Well… Is the Pioneer 500 ‘better’ in Automatic more than in Manual mode? Yes! There’s no doubt about it! I must say that is my personal opinion though before some attack me haha. I’ve put a lot of time in on these machines both the 2015 – 2016 and 2017 now and I would hands down buy the 2017 over the prior model years. That’s not even counting in the new dual-rate front suspension changes that were added to the mix which I covered in my original review here.

That’s not to say the Pioneer 500 transmission in Manual mode shifts rough by any means. Again, this is my personal opinion… At slow speeds and when shifting via the paddle shifters at partial-throttle, the Manual mode doesn’t shift as smooth as I would like for it to. That’s where the Automatic mode for 17′ on the Pioneer 500 really shines is when you’re just casually driving around. Where I think they even out though is when you’re full-throttle and I think that’s where the Manual mode really shines as to me the Manual mode is substantially smoother when you are flat-out raising hell when compared to driving normally at partial-throttle.

Long story short… On the 2017 Pioneer 500 VS 2016 Pioneer 500 debate, which would I own? The 2017. I’m glad they didn’t do away with the Manual mode though as I think it adds a fun factor that not many other side by side models out there on the market have. Yes, there’s a lot faster side by side models you can buy but I’m talking about overall fun factor and you don’t need 100+ horsepower in a UTV to have fun. No doubt about it though I’m patiently awaiting with money in hand for Honda to release a sport UTV with 100+ horsepower haha.