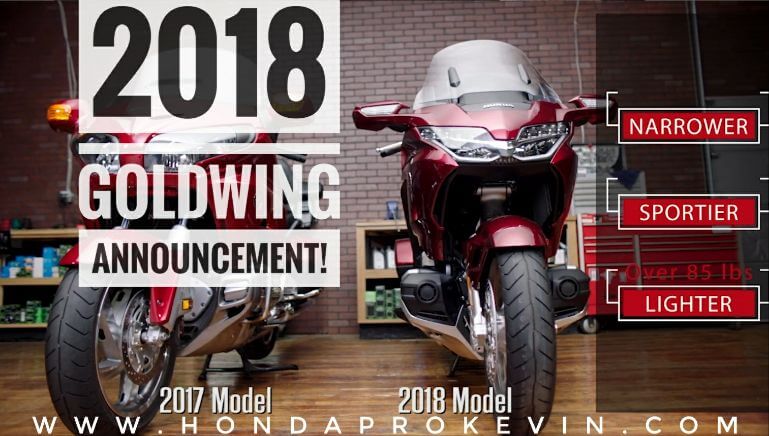 It’s finally official! Honda has let the cat out of the bag on the newly changed-up and redesigned 2018 Gold Wing 1800 Touring Motorcycle and 2018 F6B 1800 Bagger / Cruiser. Edit: Well, scratch that as the F6B has been discontinued and will now just be called the ‘standard’ Gold Wing. Man oh man… Honda hit this one out of the ballpark in my opinion. What do you guys think? Wait, I’m asking that prematurely. Check out the details and then get back to me in the comment section…

A lot of information at this time is still not available so please bare with me as I wanted to get whatever information is available out to you guys as quick as possible. I will be updating this post over the next couple of hours so make sure to check back and click “refresh” so you’re seeing the latest content update. Over the next few days I will also be posting tons of other 2018 / 2019 Motorcycle model announcements and news thanks to the 2017 Tokyo Motor Show that is kicking off on 10/25/2017. I will be posting hourly updates covering the Tokyo Motor Show so make sure to check them out by Clicking Here. 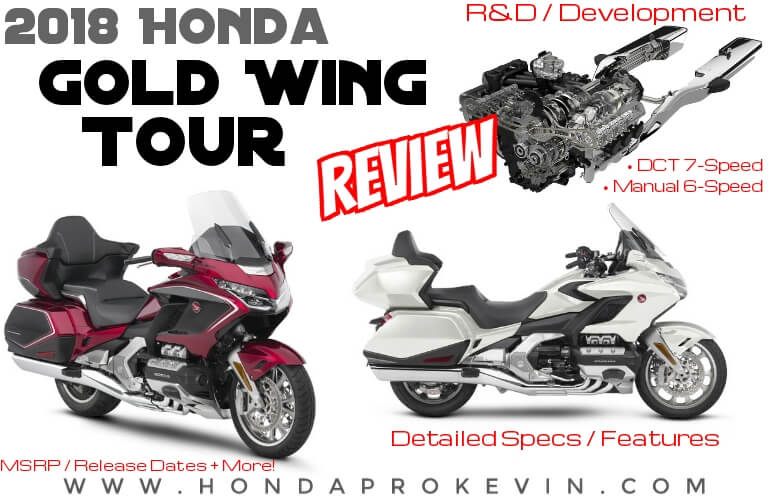 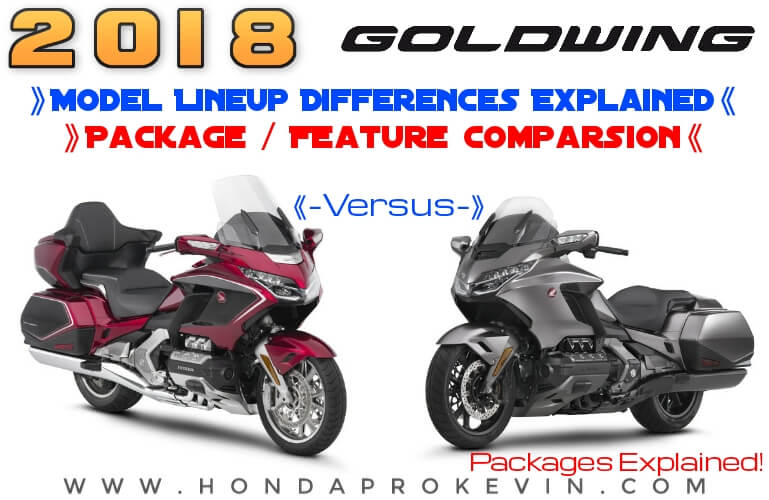 ☆ ATTENTION: I am uploading 200+ 2018 Gold Wing and 2018 Gold Wing Tour pictures (bottom of page) so make sure to check back here in just a few minutes… I will also be diving into each model more in-depth too for those that enjoy every little nitty-gritty piece of info, so if you’re into that kind of thing I will have it uploaded throughout the night. I don’t foresee myself getting much sleep tonight but it’ll be worth it! Hope you guys enjoy the info. ☆

Now, let’s kick off the official press release from Honda:

The next chapter in one of Honda’s most storied narratives began today with the unveiling of the 2018 Gold Wing and Gold Wing Tour models. Revealed during a special event at Santa Barbara, California’s MOXI Museum of Exploration and Innovation, the all-new Gold Wing takes cues from the legendary GL models that came before it while maximizing potential through a lighter, more thrilling, and more technologically advanced package with a new engine, chassis, and electronics suite.

“It’s a great feeling to pull the wraps off the all-new Gold Wing and Gold Wing Tour models here in Santa Barbara, a scenic town that itself strikes a balance between its celebrated history and modern flare,” said Chuck Boderman, Vice President of American Honda’s Motorcycle Division. “The impact of the GL line on the motorcycling world can be seen in the community that has formed around it, and we believe that in this latest version, Honda has produced a motorcycle that will be embraced by not only the existing Gold Wing community, but a fresh generation of riders seeking strong handling performance along with long-distance touring capabilities. Lighter, more agile, and more sophisticated, the 2018 Gold Wing and Gold Wing Tour set a new standard for the touring category, with groundbreaking features that enhance the riding experience and encourage riders to get out on the road, creating more exciting stories than ever before.” 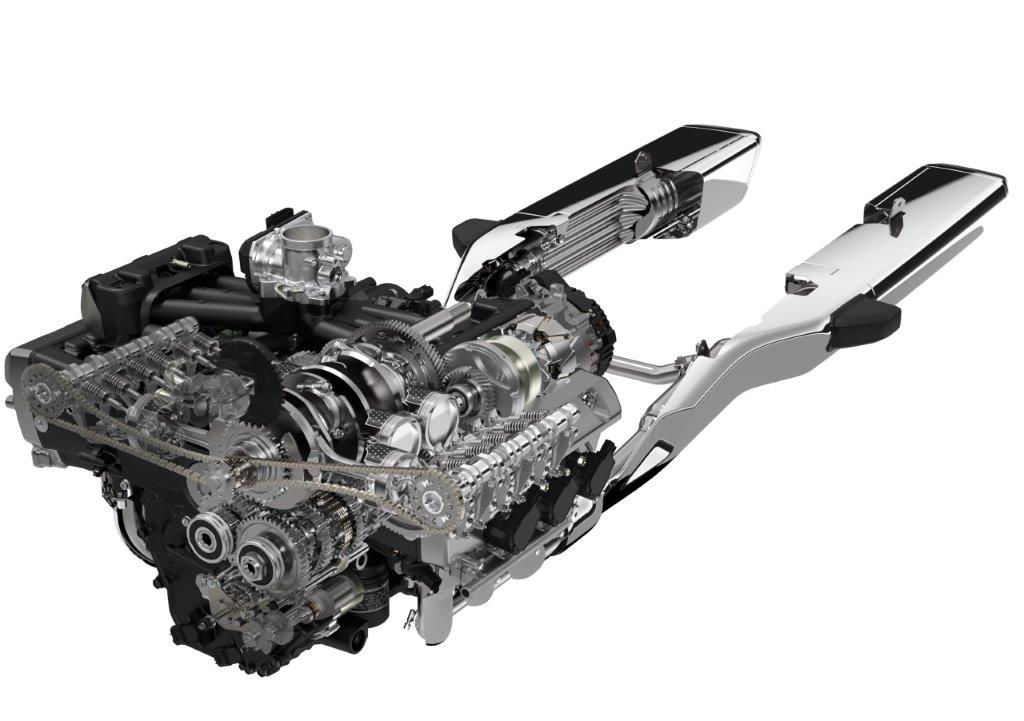 Honda’s liquid-cooled, horizontally opposed six-cylinder engine is a key element to the Gold Wing’s rich character, and while the general layout lives on, much has been done to make the powerplant more compact, more fuel efficient, and lighter. The engine is now 13.7 lbs. lighter when equipped with Honda’s six-speed manual transmission, and 29mm shorter in the front section, and is placed forward in the chassis for more ideal weight distribution, a key contributor to the 2018 Gold Wing’s sporty handling and improved vehicle packaging.

Specific changes for 2018 include a smaller, 73mm cylinder bore, updated crankshaft, and a Unicam® valve train layout that has been proven on the award-winning Honda CRF450R motocrosser. Combustion efficiency is improved via the use of four valves per cylinder, while friction is reduced through the application of a new molybdenum coating on the piston skirts. Thanks to a lighter overall package and enhanced vehicle aerodynamics, which led to improved fuel efficiency, engineers were able to reduce the fuel tank capacity by 1.1 gallons while retaining the same great range as before. This change is one of many aimed at improving handling via refined vehicle packaging and weight reduction.

Additional changes include a new intake system for added responsiveness and torque, as well as an updated exhaust system that highlights the bike’s livelier personality through a deeper exhaust note.

For 2018, the Gold Wing chassis has undergone multiple revisions to increase low-speed maneuverability and maintain high-speed stability. A robotically welded twin-spar aluminum frame uses plates with reconfigured thicknesses and is matched to a single-sided swingarm with new pivot-area structure. Together, the frame and swingarm contribute to a 4.4 lb. weight reduction, which when combined with the low center of gravity and better mass centralization, contributes significantly to the bike’s improved nimbleness.

Suspension is comprised of a new double-wishbone front-suspension system and Showa shock absorbers front and rear. Designed to offer reduced friction and less inertial mass for the front-end components that are manipulated via the handlebars, the system also leads to more compact vehicle dimensions, as its different stroke trajectory enabled engineers to position the engine closer to the front wheel. For added comfort, the Gold Wing uses a Pro-Link® rear-suspension configuration with progressive reaction. On most models, suspension damping and preload are electrically adjusted.

Brakes have been upgraded via radially mounted front calipers and larger, 320mm rotors. Electronically controlled combined ABS works to distribute braking force to the front and rear wheels while saving weight through the use of a smaller, lighter circulation-type ABS modulator.

Fully modern, the 2018 Gold Wing features a throttle-by-wire system that has opened the door to four riding modes (Tour, Sport, Econ, and Rain), Honda Selectable Torque Control (HSTC), Hill Start Assist, and a finely tuned cruise-control system. Selecting the riding mode that’s best suited for the riding conditions is easily accomplished through the Gold Wing’s new controls, and then confirmed via a beautiful, 7-inch full-color Thin Film Transistor liquid-crystal display—one of the many features that bolster the model’s premium feel.

In an industry first, the 2018 Gold Wing also comes equipped with Apple CarPlay™, which connects the motorcycle to the user’s iPhone to show maps, contacts, and music, all accessed through the motorcycle’s display.

The sportier nature of the 2018 Gold Wing and Gold Wing Tour is underlined by the bike’s sharper, more performance-minded shape, which also achieves a significant boost in aerodynamic efficiency. Narrower at the front and with added emphasis on such mechanical parts as the exhaust and lower engine, the bike offers the same comfortable ergonomics as before, but with reimagined airflow for rider and passenger, both of whom sit 36mm further forward. Thanks to new air-guiding ducts and an electric windscreen that provides the rider with even greater control over airflow, it is now more possible to feel at one with the elements, or to enjoy a windless-type experience.

LED technology is used throughout, with the multiple-lens front lights forming the new “wing lines” of this latest advanced performance touring model, and the LED turn signals having a convenient auto-canceling feature. A user-friendly luggage system bolsters on-road convenience while also contributing to the vehicle’s compact dimensions, sporty appearance, and lighter weight. Each saddlebag holds 30 liters, while the top case has a 50 liter capacity, and high-quality lid dampers are used throughout.

Boasting a sporty character, the two Gold Wing models—Gold Wing and Gold Wing DCT—come with saddlebags but no top case or the accompanying rear audio speakers. The electric windscreen is shorter on these models, and preload adjustment is manual. HSTC, electric damping-adjust, center stand, and heated grips are not included.