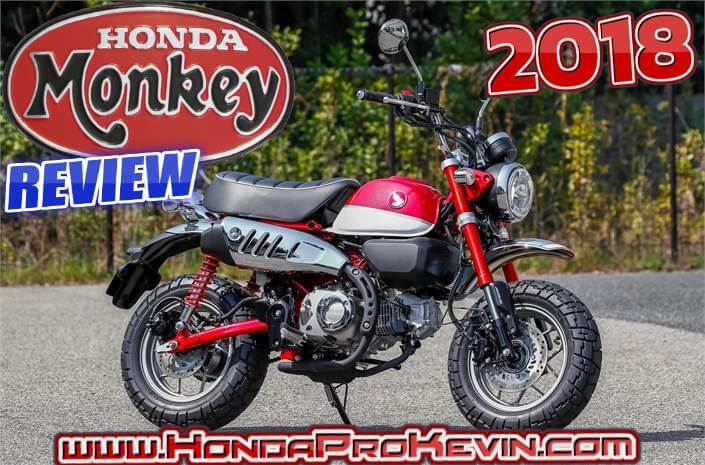 It’s officially here! The Honda 125cc Monkey bike from Honda is flipping here guys! I don’t know why I’m that excited though as it still hasn’t been slated for a release here in the USA but I have hope as we’re possibly one step closer to that happening. I have a sneaky feeling though, keep in mind this is all speculation (if you’re reading this Honda, I love you guys wink wink), that I’ll be able to post that the 2019 Honda Monkey 125 will in fact be releasing in the USA. Yes, on our side of the pond – anyone else excited at the idea of that happening? I need one of them about like I need another hole in my head but I would love to park one of these next to my Grom and in a few more years be able to mob around town with my son on these mini bikes. If you would have asked me prior to the Grom being released in 2013 if I would ever be excited about the idea of a 125cc motorcycle… I would have told you that you’re clinically insane. There’s just no way. Enough about that though, let’s dive into what you’re more than likely here for and that’s for more details on the just-announced 2018 Monkey 125 from Honda and not my silly rambling.

Monkey UPDATE: The 2019 Honda Monkey 125 is releasing in the USA! You heard it here first, this isn’t a rumor. We are getting the new Monkey and Super Cub motorcycles for 2019 on this side of the pond… Click Here for 2019 Monkey 125 USA Buyer’s Guide! 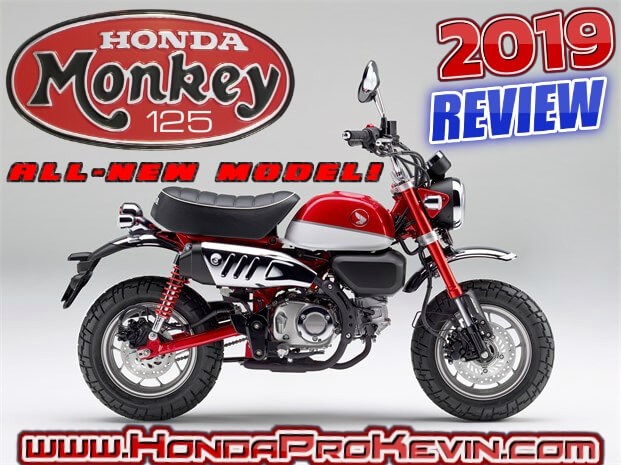 If you follow my blog fairly regularly, you would have seen that Honda has been toying around with different versions of the Monkey (Concept Monkey 125 Click Here) with new concept motorcycles the last year or so and also different renditions of the Grom / MSX 125 too so it was clear they were wanting to possibly do something. Getting a bike past that concept phase though isn’t easy and can sometimes be a long road or even a road with a big fat dead-end sign to greet you at its end. Customer feedback at these big motorcycle shows and online via different social media outlets like Facebook, Twitter, Instagram, YouTube etc can have a huge affect so make sure to voice your opinions when you see something you like. You never know, that next concept bike you fall in love could end up making its way to production. 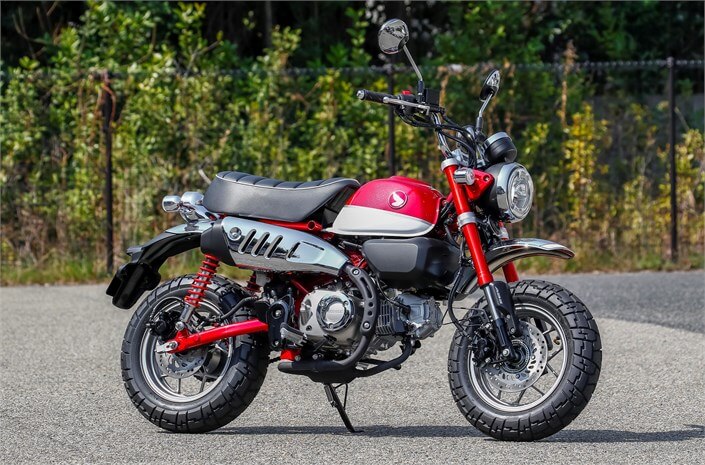 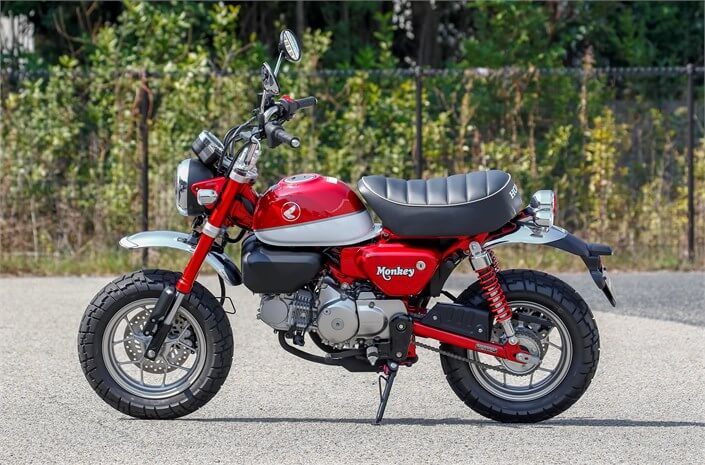 Here’s a few pictures of what the original Monkey 125 concept bike from Honda: 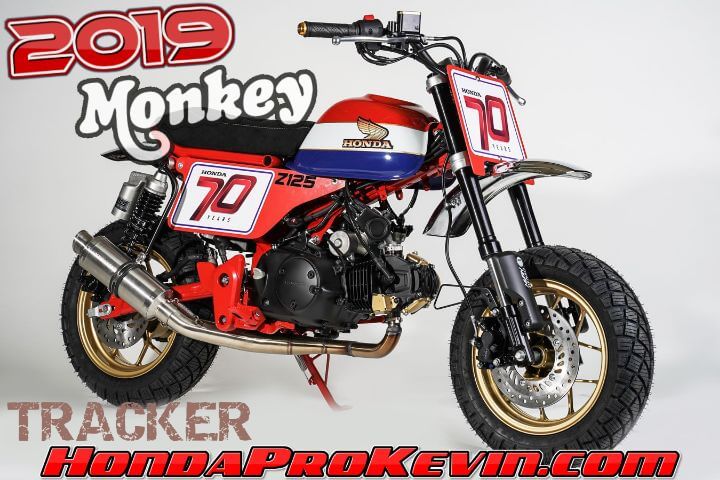 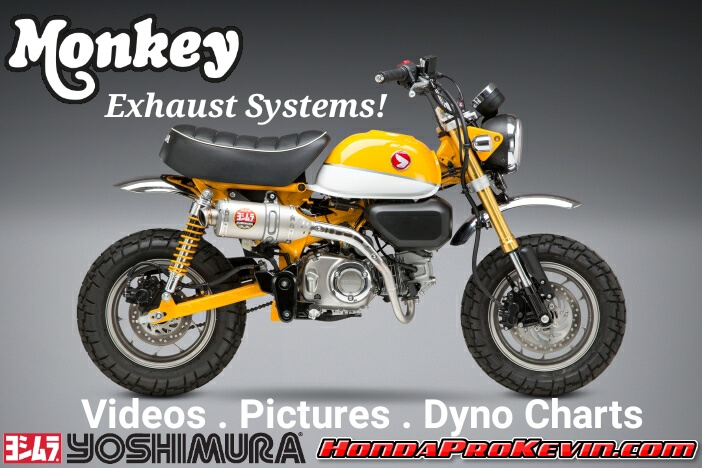 Honda’s genuinely iconic mini-bike has now been re-imagined for the present day, with styling that draws heavily on the original, complemented by modern, premium touches such as USD forks, twin rear shocks, LCD instruments, IMU-based ABS and full LED lighting. ABS is standard equipment in other parts of the world but if (when) this bike releases in the USA, I’d say it’ll be a $200 option for ABS just like the 2019 Grom 125. Its 125cc air-cooled engine delivers a earth shattering 9 horsepower, and fuel efficiency comes in at a staggering 157 MPG (67km/l); curb weight comes in at only 235 lbs (107kg). 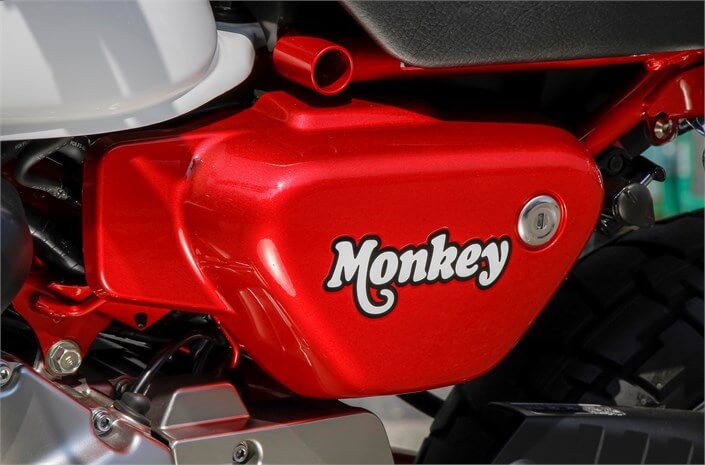 The Honda Monkey bike is perhaps most widely known as a groovy icon of the 1970s, but it first saw the light of day in 1961. Originally developed as a 49cc child’s plaything for Tama Tech, an amusement park in Tokyo, it proved so popular that a road-going version was developed, which was initially exported to America and Europe in 1963, with a distinctive chrome tank, folding handlebars and 5-inch diameter rigidly-mounted wheels.

Its popularity was based on a cute, instantly-likable design, tiny dimensions and ultra light weight – which made it a whole load of fun around town. By 1969 its wheels had increased to 8-inch in diameter and from 1970 it gained even greater popularity, when the addition of quick-detach forks meant it would fit into the trunk of a small car.

By 1978 – a point that marked the start of real prime time for the Monkey – the machine had been re-styled with a teardrop style fuel tank, and became hugely popular with legions of RV (Recreational Vehicle) drivers in need of convenient transport to use once they were parked up. And this is where and when the cheeky Monkey really cemented its place in millions of hearts; with its 3-speed gearbox and centrifugal clutch (which needed no ‘traditional’ motorcycle skill to operate) it gave thousands of riders their first experience of twisting the throttle on a powered two wheeler.

Because it was so much fun, and so easy to ride, it did more to sell the concept of motorcycles to a wider public than perhaps any other machine. With its chunky tires, mini-‘ape’ style handlebars, miniscule fuel tank and big, squashy seat the Monkey look is unmistakably of its time, but – just like the affection in which it is held – also timeless.

After the modern-day success of the sharp-suited Grom / MSX125, which proved the desire for a funky, pocket-sized town run-around, it was time for the Monkey name to return, reborn and ready for life in the 21st century city.

Naturally the classic Monkey style had to provide the cues for the new model. A trapezoid silhouette highlights the compact length, while adding depth and substance to its stance. Simple, curved surfaces are designed independently of each other and feature throughout. 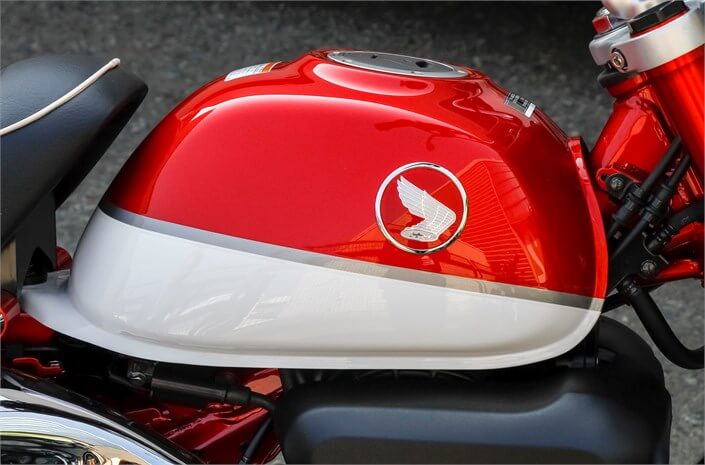 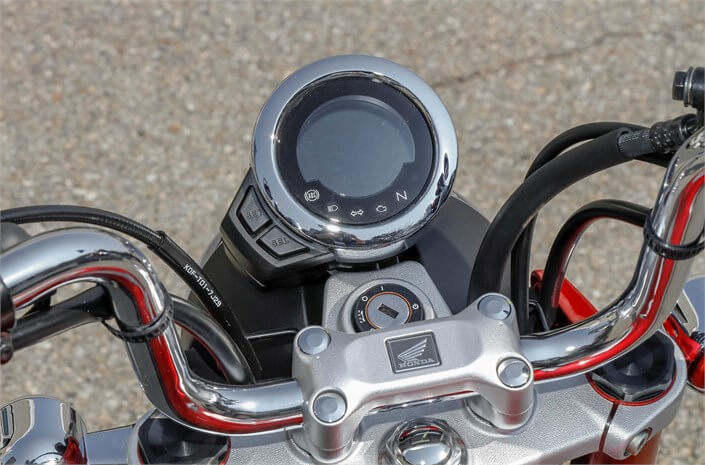 Modern technology is fully present within the evocative reincarnation of the classic look: a digital full-LCD circular meter features speedometer (which winks playfully when the ignition is turned on), odometer with two trip meters and six-segment fuel level indicator; all lighting is LED; the ‘wave’ pattern key (which also wears the Old Wing motif) features an ‘answer back’ system that makes the lights flash at the push of a button to allow easy location in crowded car parks; the single channel ABS system operates with an IMU to mitigate rear ‘lift’ under strong braking.

As for the power unit, true to its origins, the Monkey’s horizontal SOHC 125cc single-cylinder engine is simple, robust and tuned to deliver useful about-town performance. Air-cooled, with bore and stroke of 52.4 x 57.9mm and compression ratio of 9.3:1, fed by PGM-FI, it produces 9 horsepower @ 7,000rpm and 8.1 lb/ft of torque @ 5,250rpm. The gearbox is 4-speed and the engine returns fuel economy of 157 MPG (67km/l). 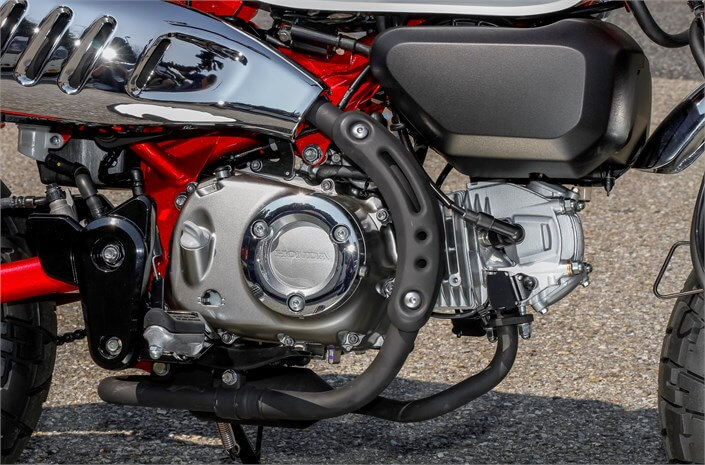 Compared to the Honda Grom, the Monkey shares more of the same engine details than what are actually different. They are identical in bore and stroke as well as compression ratio. The Grom makes less than one more horsepower and there is only about .1 of a difference when it comes to their torque numbers but max torque comes in about 250 RPM sooner whereas their peak horsepower figures both come in at 7,000 RPM. I haven’t been given the gear ratio numbers yet but I would almost bet money that they are identical as well as sprocket counts up front and in the rear. The Monkey does come in at about 10 more pounds but that is only if you’re comparing it to a non ABS model Grom, if you compare apples to apples and ABS versus ABS model then it’s less than a full pound of difference. Long story short, if you’re wanting to know how the Monkey 125 VS Grom 125 race would turn out… I would say that the guy winning that race would be whoever had the lighter breakfast that morning and has more skills than the next guy. The nitty-gritty performance details and specs when comparing the Monkey versus Grom are just too similar for there to be a clear winner.

The Monkey’s steel backbone frame has been tuned for a suitable balance between rigidity and supple feel – perfect for the wide variety of conditions the machine is sure to be ridden in. Oval in cross-section, the swingarm echoes the circular design theme that runs through the bike. 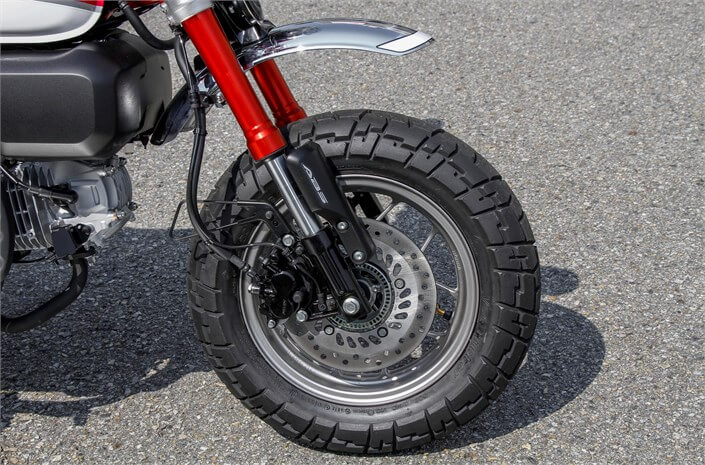 The 2018 Monkey 125 will be available in three color schemes:

First model – made for use at amusement parks, with 5 inch wheels, rigid suspension, foldable handlebars and 3.1kW 49cc engine. 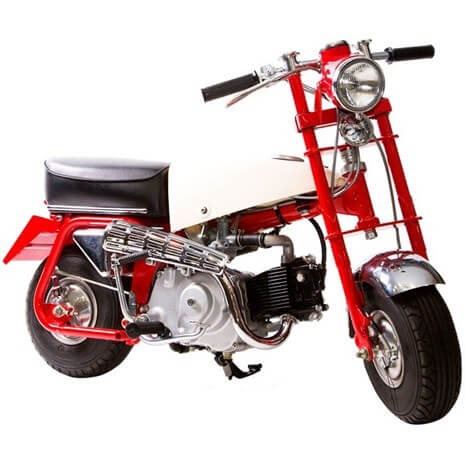 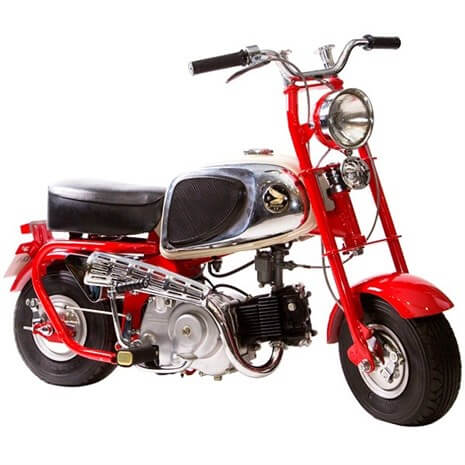 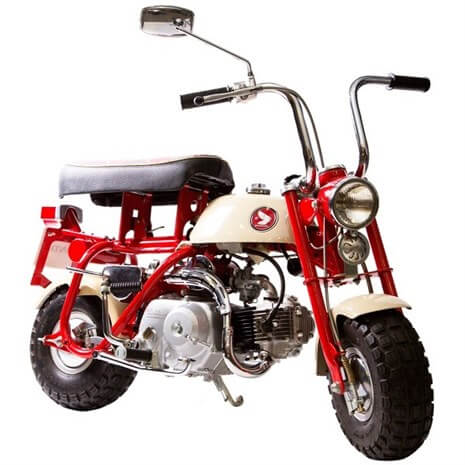 Quick-detach front suspension made it possible to fit in the trunk of a small car. 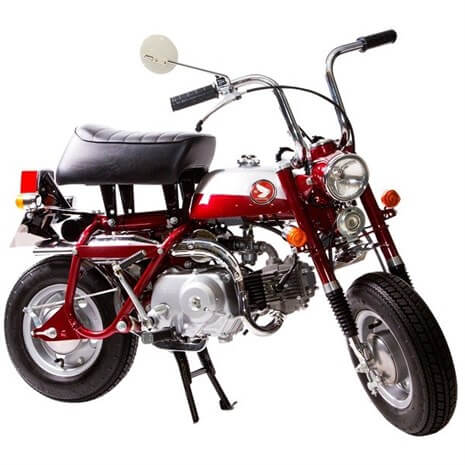 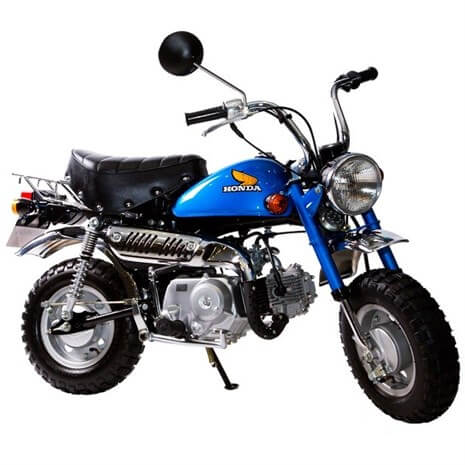 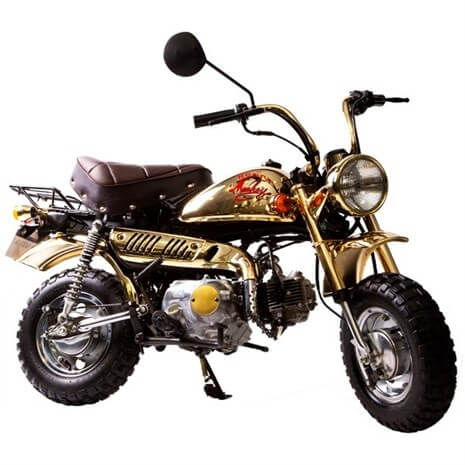 ‘R’ model with twin tube frame and hydraulic front brake disc. This made its way to the USA, known as the ZB50 and has been on my list of bikes I absolutely “need” but coming across one is like finding a needle in a haystack since it was only sold in the USA for one production year, 1988. Insert sad face here. 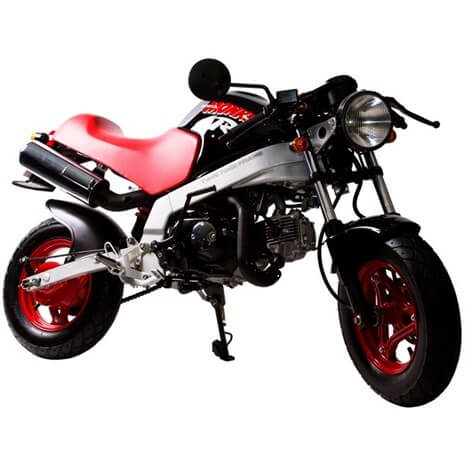 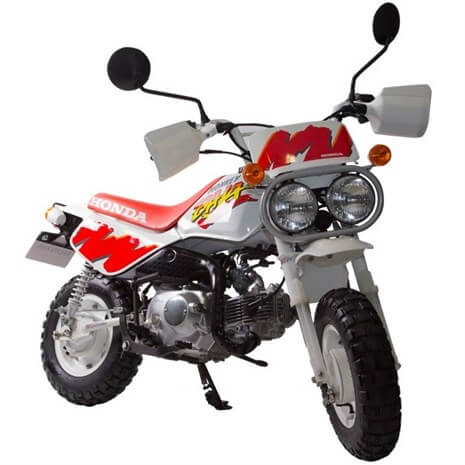 In colors based on the CB750F ridden to victory in the Daytona 100 by the master himself, Freddie Spencer. 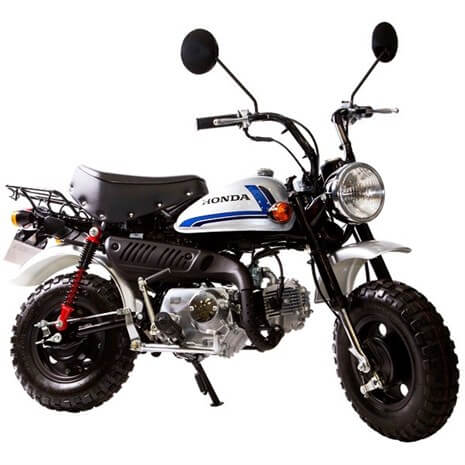 The first fuel-injected version of the Monkey and also outfitted with a roller rocker arm setup in the head and an off-set cylinder. 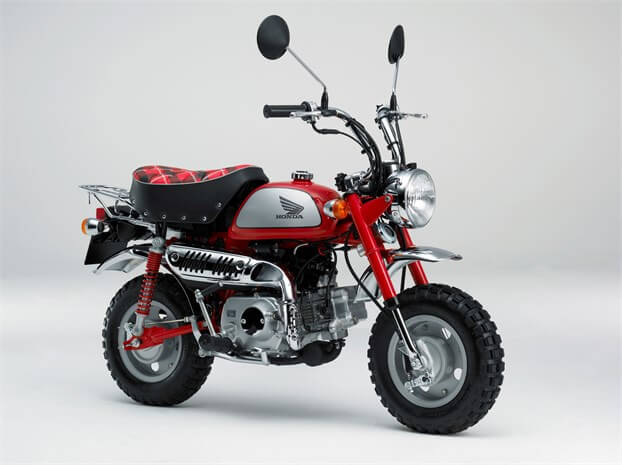 This version commemorates the 50th Anniversary of sales for the Monkey in Japan. 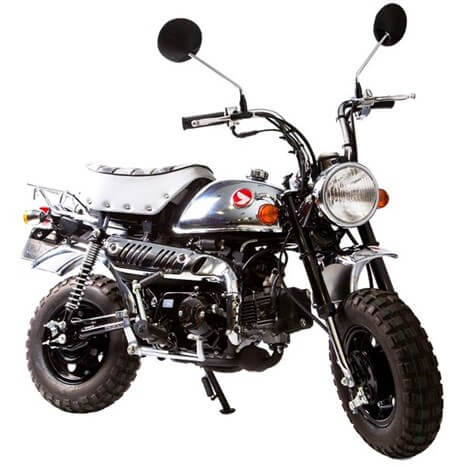 * All specifications are provisional and subject to change without notice.