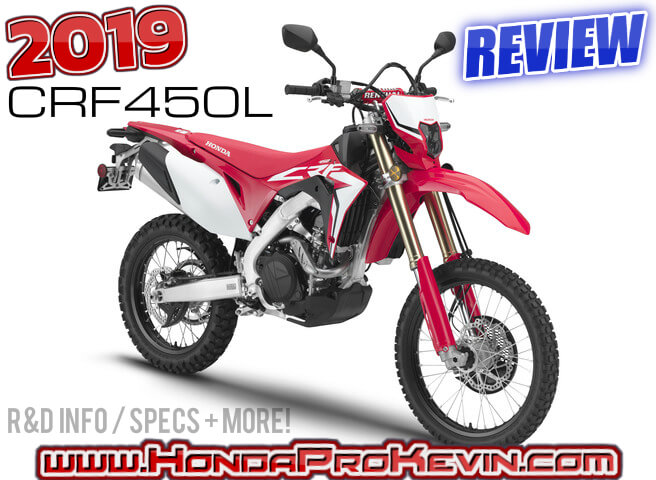 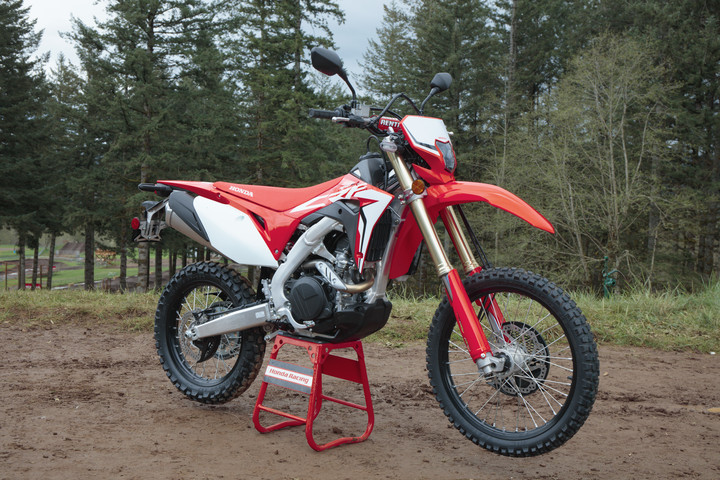 The day has finally come! If you follow any of Honda’s social media websites over the last decade or so then you have probably seen people asking “Why doesn’t Honda build a 400 cc – 450 cc dual-sport motorcycle like the CRF250L but bigger with more horsepower etc?”. That question was seemingly falling on deaf ears as the years just kept ticking on by and all we had was the CR250L which don’t get me wrong was an awesome bike, but some want more power and then we had the XR650L which hasn’t been redesigned in decades. Yes, decades. I’ll be nice and leave that topic alone at the moment though haha as we’ve got something even better than a redesigned and updated XR650L and that would be the ALL-NEW 2019 CRF450L from Honda! They finally did it! It’s not a pig either, they really did their homework and even though this bike has a larger engine and more bells and whistles etc – it comes in more than 30 lbs less than the CRF250L. Pair that up with more horsepower and torque and if you like performance, the 2019 CRF450L VS 2019 CRF250L won’t even be a question that runs through your mind. Well, unless you have a set budget as the 450L version of the CRF is going to come in around the tune of twice as much money as the 250L when comparing their prices… 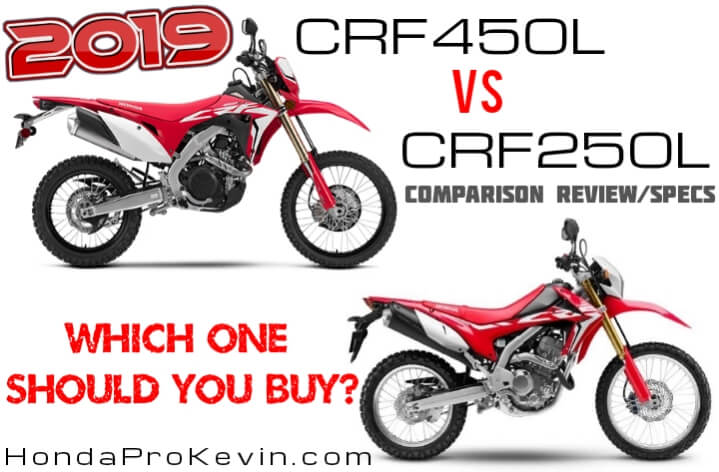 That may be a tough pill for some to swallow. Once you really start comparing the nitty-gritty details though between the models, it’s beyond clear at where that money was spent from Honda when it comes to R&D on this new CRF450L and personally I think we’ll have a homerun on our hands. A grand slam though would be if we saw Honda build a 2019 – 2020 CRF450M supermoto out of the CRF450L platform. They tried it a few years ago when they build the CRF230M based off of the CRF230L platform which was in return based off of the CRF230F. Saying that wasn’t their best decision is putting it nicely but they redeemed themselves with the CRF250L and CRF250M motard which we sadly never saw here in the USA. Could the CRF230M turning out to be a dud in sales, made Honda gun-shy to releasing more supermotards in the USA? Who else would like to see Honda build a CRF450M? I’d put my name down for one with the quickness!

Enough of my rambling though, let’s get to what you came here for and that is to check out more information and details on the 2019 Honda CRF450L dual-sport motorcycle… 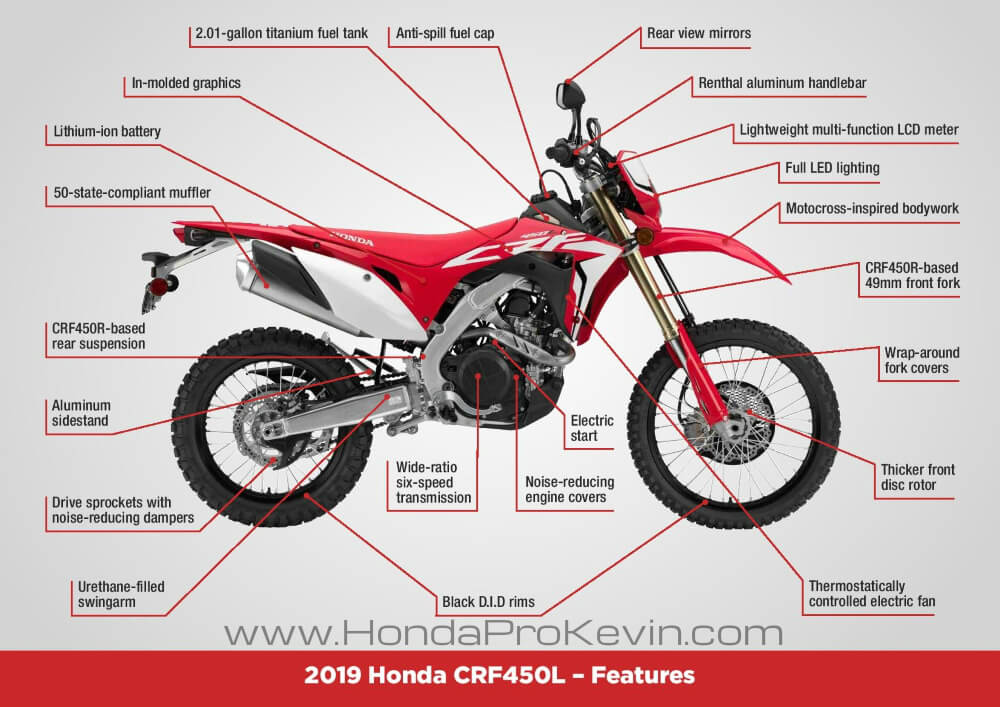 A true dual-purpose motorcycle should be many things; off-road it needs to be light weight, with quality suspension and handling ability that keeps life easy as the going gets harder. Its engine has to make good power and torque from the bottom up – the sort that is supremely usable, allowing the rider to find all the rear wheel grip possible, whatever the terrain.

All the attributes that make it great fun off-road also enable it to be really useful around town; narrow and nimble, a dual-purpose machine slips through gaps, soaks up the hits from rough roads and stays well ahead of traffic thanks to smart, low-gear acceleration. It also needs to be turn-key reliable, with sensible intervals between major service work.

Competition machines can make a solid base for dual-purpose adaptation. But there is much to consider. Race-level performance brings with it an intensive maintenance schedule, which is simply too much for many ‘hobby’ trail riders, who just want to push a button and go – and keep on going, Furthermore, a barely-disguised race bike can mean crucial road-going elements – lights, indicators, ignition switch – are not as user-friendly and durable as they should be.

Honda understands this, and with a desire to produce a dual-purpose bike that draws strongly on the fundamental performance of a race machine, yet with much more ‘normal’ service intervals and high-quality road ancillaries, has taken its CRF450R moto-crosser as the base to start from, and created the new CRF450L.

It is unmistakably a race-bred CRF – and looks it – but with the additions and modifications needed to make it both road legal and supremely useable in a trail environment. As such, the CRF450L is a complete package, as happy roosting trails as it is linking them up on-road. And with Honda engineering and build quality at its core, is sure to do so for years to come.

“The CRF450L is about having maximum fun out on the dirt. It looks like a CRF450R because, really, it is – just a trail-friendly, road-legal version. That’s what the ‘L’ stands for – ‘legal’. It’s been engineered to deliver excellent handling feel, with linear engine torque that helps the rider make the most of the available grip in all conditions. AND, it contains its HRC-derived CRF technology within a real-world service schedule.” 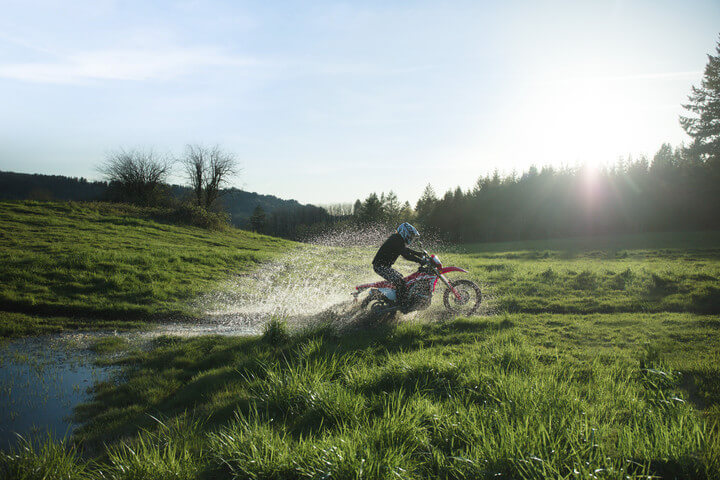 The journey from full race to road legal trail was a detailed one for the CRF450L. Road legality required the engine to gain EURO4 compliance, while from a longevity and usability viewpoint, the power output and character, needed careful attention.

It’s still a CRF450R; just one that’s quieter, both mechanically from the chassis and engine, as well as its new exhaust. Both fuelling and ignition maps are now managed by 02 lambda sensor; compression ratio has been lowered and crank mass increased for improved drivability. The gearbox is a 6-speed – for longer legs on the road – and a cush drive has been added to the 18-inch rear wheel.

The plastics are lifted directly from the CRF450R and all lighting is LED, with the front headlight in particular throwing out a penetrating beam. Increased volume for the titanium fuel tank adds range and all the items that make the CRF450L ready to purchase as a licensed, road going machine – such as speedometer and horn – are present as standard. 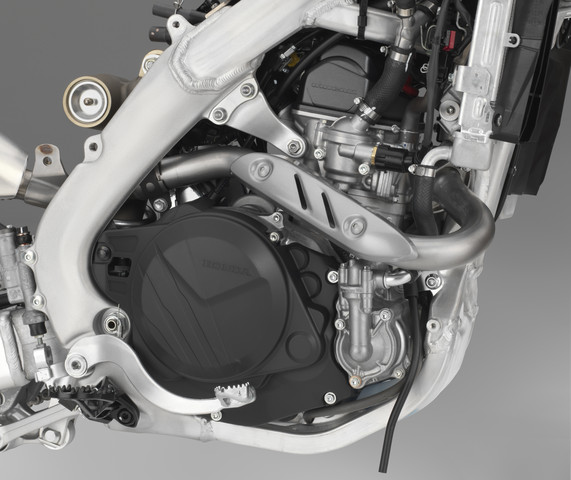 While the chassis was more straightforward to convert from its CRF450R moto-crosser specification to a dual-purpose performance level, the 449cc engine needed more consideration from Honda’s engineers. Requirements were several: the need for it to pass EURO4 emissions and noise regulations, and to be usable for a wide variety of riders in many differing situations both on and off-road.

While the fundamental architecture of the four-valve Unicam powerplant remains the same, many details have been changed to support the broader role: the crank’s mass has been increased, resulting in 13% more inertia which, for a trail rider, equals improved torque feel and response; valve timing has been revised to give the broader, smoother spread of power and torque; the gearbox is now 6-speed, rather than 5 for longer range use on tarmac; left and right engine covers wear outer covers to reduce noise;

Elsewhere, the ACG has been uprated, to provide the required electrical power for the LED lights and to maintain battery charge during lower-speed running. The battery itself is a high-volume unit. 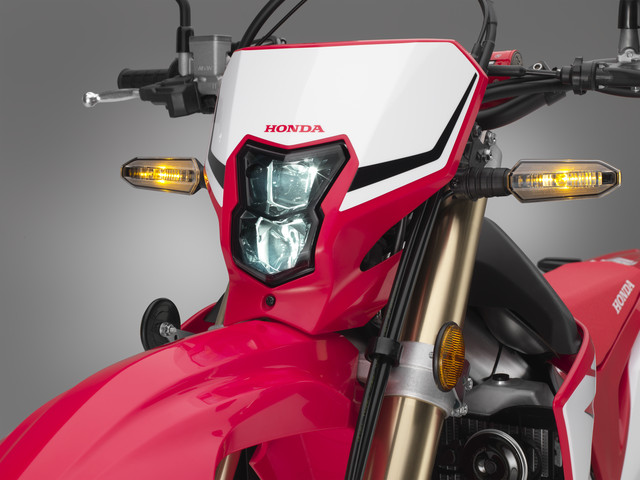 Bore and stroke are unchanged from the CRF450R, at 96mm x 62.1mm, but the piston uses 3 rings instead of 2 for greater durability. Compression ratio is 12.0:1 (compared 13.5:1). The redesigned airbox feeds the PGM-FI, managed by a lambda sensor in the large-volume single exhaust (which replaces the ‘stubby’ dual-pipe design of the CRF450R). An Air Injection (AI) system and catalyser clean up the spent gases.

The clutch spins 7 friction discs with a 2mm clutch plate efficiently dissipating heat; the springs generate a good, consistent connection. The front sprocket is a 13T, the rear 51T.

Here’s a picture of the 2019 CRF450L Manufacturer’s Certificate of Origin showing the horsepower rating: 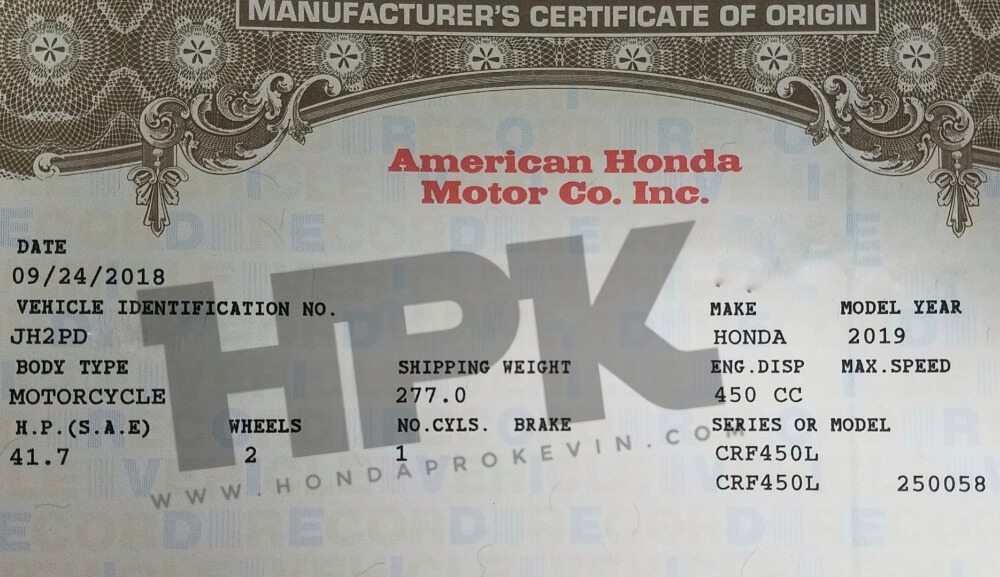 How does the 2019 CRF450L stack up against the other 2019 CRF dirt bike models in the engine performance department? Here’s horsepower numbers on each of the CRF models: 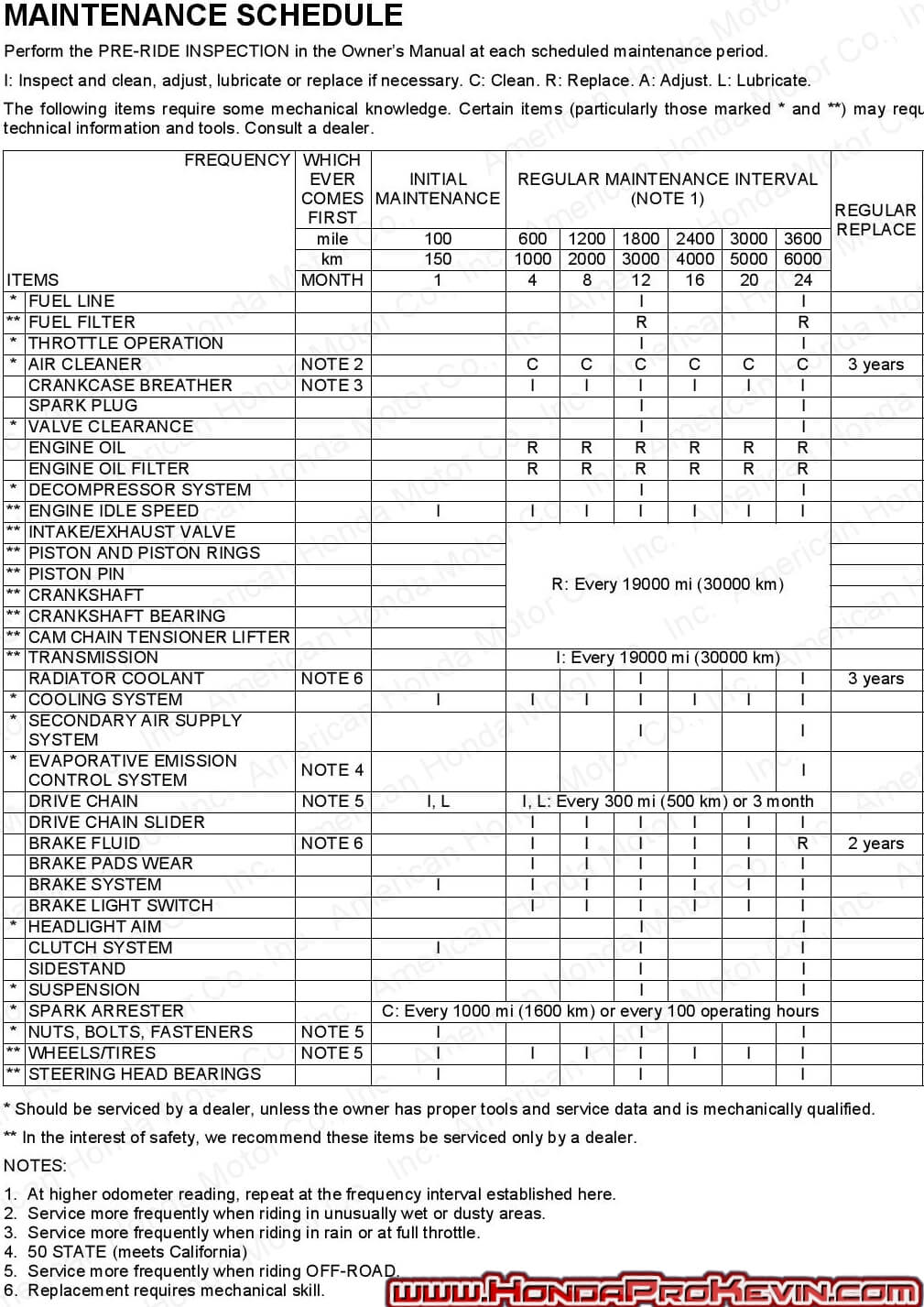 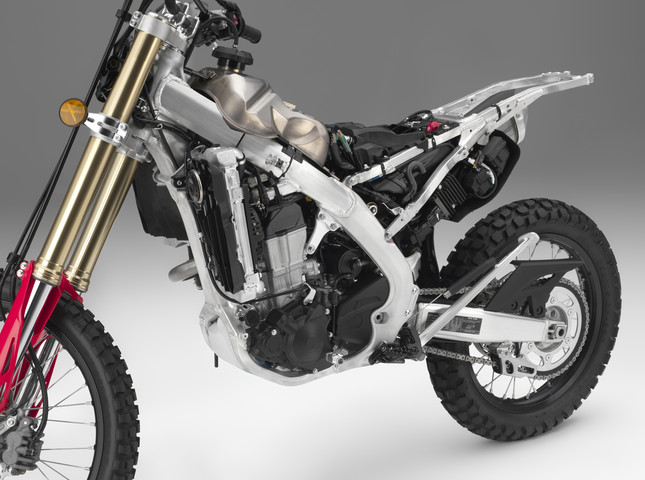 Having received a ground-up redesign in 2016, the CRF450R’s chassis was a perfect place for the CRF450L to start out from, with changes to match the machine’s vastly broader usage range, and road legal mission.

Firstly, the tapered dual-spar aluminum beam frame was made slightly wider at the swingarm pivot points, to allow for the greater engine width resulting from the 6-speed gearbox. The headstock was modified to mount a steering lock and the aluminum swingarm injected with urethane to reduce noise. The rear subframe is the same, with mounting point adjusted to take the taillight and the right-exit single exhaust muffler.

A 49mm Showa steel-sprung USD fork – adjustable for preload plus compression damping – is matched by a fully adjustable Showa rear shock, operated through Pro-Link. A 260mm wave-pattern disc delivers effective heat dissipation, power and feel from the two-piston brake caliper working it; a matching 240mm wave-pattern disc and single-piston caliper is at the rear.

The CRF450L’s style draws fully on that of the CRF450R. Carried over are the rear mudguard, side panels and bash plate. Svelte side shrouds hide a larger radiator volume plus electric fan. All lighting (including the indicators and license-plate light) is LED; a speedometer, horn, brake-light switch and mirrors satisfy legal requirements while a sidestand adds convenience. The CRF450R employs a 1.66 gal (6.3L) titanium fuel tank; the CRF450L ups the volume .34 gal (1.3L) to 2.01 gallons (7.6L). The fuel cap also locks in place.