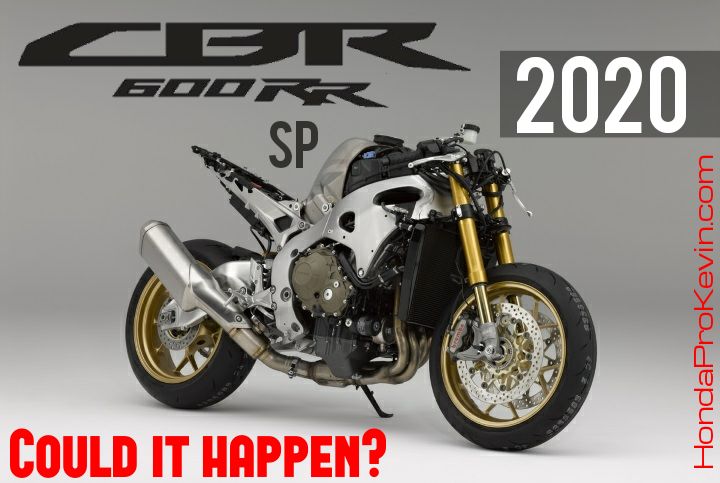 We’re already a few months into 2018 which means it’s time to start speculating on what 2019 – 2020 has to offer as we’re only a few months shy of the latest 2019 CBR RR sport bike announcements since I just updated our first | 2019 Motorcycle Announcement Update #1 | that you can check out by Clicking Here.

Being a “sport bike guy” myself, I’d like to have a conversation with you fellow-minded guys on what you think and what you would like to see in a perfect world. Do you think Honda will ever build a CBR600RR SP model? a 2019 or 2020 CBR600RR SP or beyond?

What is the SP that I speak of? The SP model is Honda’s Special Production version of the CBR1000RR specifically that offering you Brembo brakes, semi-active Ohlin’s Suspension and loads more goodies that you can check out by Clicking Here. It takes what is already a baaaad bike and steps it up a notch thanks to Honda’s performance division known has HRC (Honda Racing Corporation).

The enthusiast in me wants it to happen. Why? Because I would buy it no questions asked if they were to offer the same package the 2018 CBR1000RR SP has but as a CBR600RR SP.  Call me crazy but having a CBR600RR with semi-active Ohlin’s suspension, Brembo brakes, traction control, engine braking control etc would be awesome and something I’d fork the money over on ASAP!

The business side of me knows it probably won’t happen. I’d almost bet a large sum of money that not only will it not happen any time soon but it doesn’t look promising any time in the foreseeable future. Why do I think that? Because 600cc supersport bike sales are in the slumps. We used to get new tweaks to the 600cc lineup from Honda every couple of years, to make them lighter, faster and just all the way around a better and more potent package. Those days are gone. Well, they have been gone for a while now. Example, the CBR600RR was first introduced in 2003 and then they made a few tweaks in 2005. Then, Honda did a complete overhaul in 2007 making the CBR600RR the baddest 600cc supersport bike on the market that us mere mortals could buy. Then the bike stayed essentially the same (except for minor tweaks in 2009) all the way up until 2013 where Honda made a few visual tweaks as well as suspension and wheel alterations. Now, we’re into 2018 and the CBR600RR is still the same as it was in back in 2013 and many components date back to the 2007 redesign.

This isn’t a diss at Honda though as every manufacturer seems to be following suit whether it be Yamaha, Suzuki, Kawasaki etc. Will 600cc sport bikes end up with the same fate as the race-bred 450cc race ATV / quad models? The majority of manufacturers are bowing out of the market segment as utility ATV sales have just been killing them in sales numbers day after day. Year by year. Here’s an example of what Honda did concerning those sport / race ATV or quads – Click Here. They’ve got about a million names but you know what I’m talking about haha.

Could 600cc supersport bike sales be in the slumps because of their price increases over the last few years? MSRP on 600cc bikes are now higher than what their 1000cc counterparts were at a decade ago:

However, could it all be down to price on 600cc sales slowing down when technically the CBR1000RR as well as other brands have a higher percentage increase over the years? It could be said though that at least with the price increase on the CBR1000RR, you saw some major technological advances whereas on the CBR600RR – not so much. I’m not knocking the CBR600RR though as even by today’s standards, it is still a very potent package. Dated but potent. What’s the most you would pay for a CBR600RR SP if they threw it under the knife and added the same bells and whistles (for the most part) that the CBR1000RR SP has?

So… Your thoughts? Opinions on a CBR600RR SP? What changes would it take for you to throw your wallet on the table and buy a new CBR600RR?