Have you ever wanted to connect your phone to your motorcycle or scooter via an app with Bluetooth? Honda is hard at work on making that a possibility for everyone! 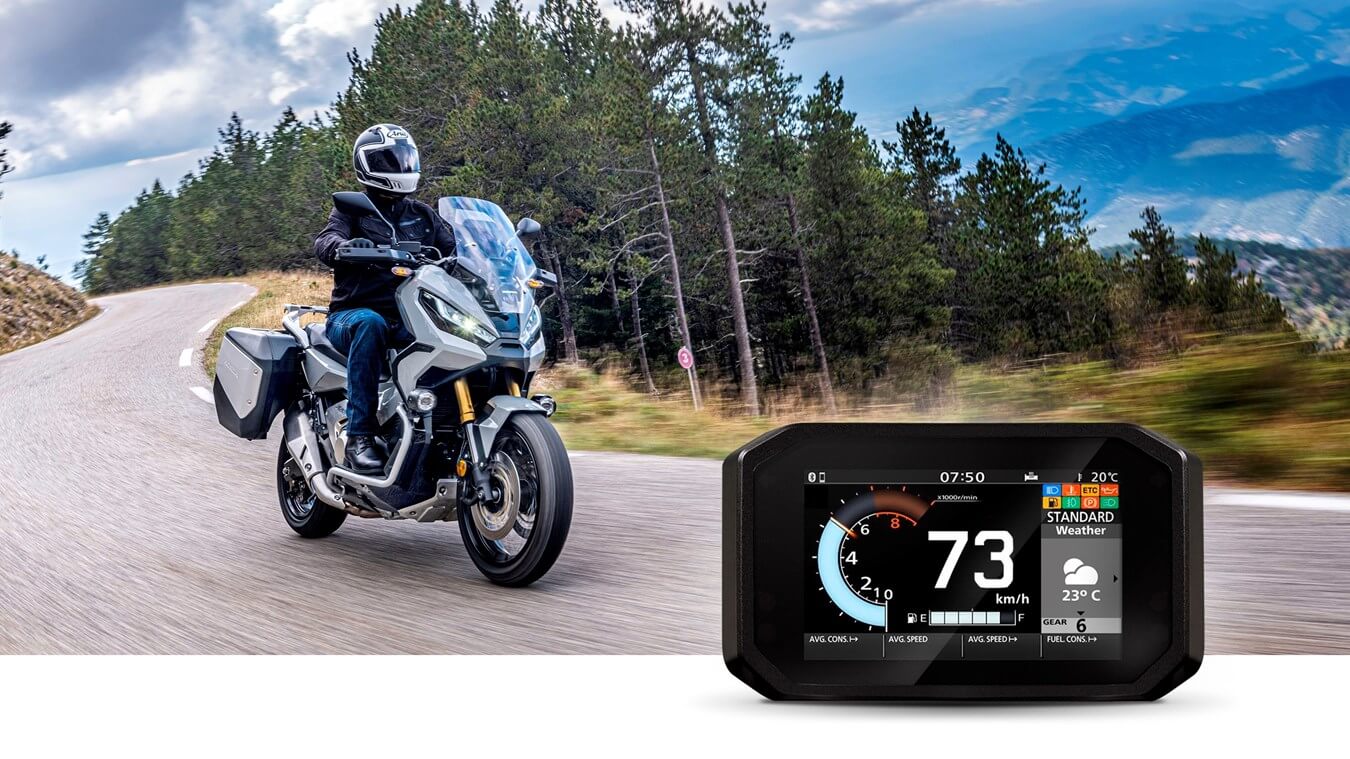 The technology is available in certain areas but not for us here in the USA just yet. We talked about this last year and dove into some more information regarding Honda’s Smartphone Voice Control System for motorcycles. If you haven’t checked it out, you can do so by Clicking Here or on the picture above to take you to where you can learn more about the Roadsync app etc.

Using smartphone functions with simple operations during a ride.

Nishikawa: It is a system that connects the rider’s smartphone and motorcycle via Bluetooth® for using the smartphone functions like navigation, phone calls, text messaging, and music, without interrupting riding operations. It’s the unique technology Honda and its group company, Drivemode, jointly developed.

Joao: This system comprises two factors. One is a smart phone app. The other one is a control system to use Bluetooth® implemented on the motorcycle.

Osanai: Voice reception and speaking are done via a headset which is getting popular among riders these days. The system is operated with a handlebar switch and voice input.

Nishikawa: The system voices the function selected with the switch located on the handlebar, so the rider can hear and learn what is being operated now. Moreover, the functions are limited to apps frequently used during a ride. It is very simple. The rider can use smartphone apps comfortably without looking away from the traffic situations during a ride. 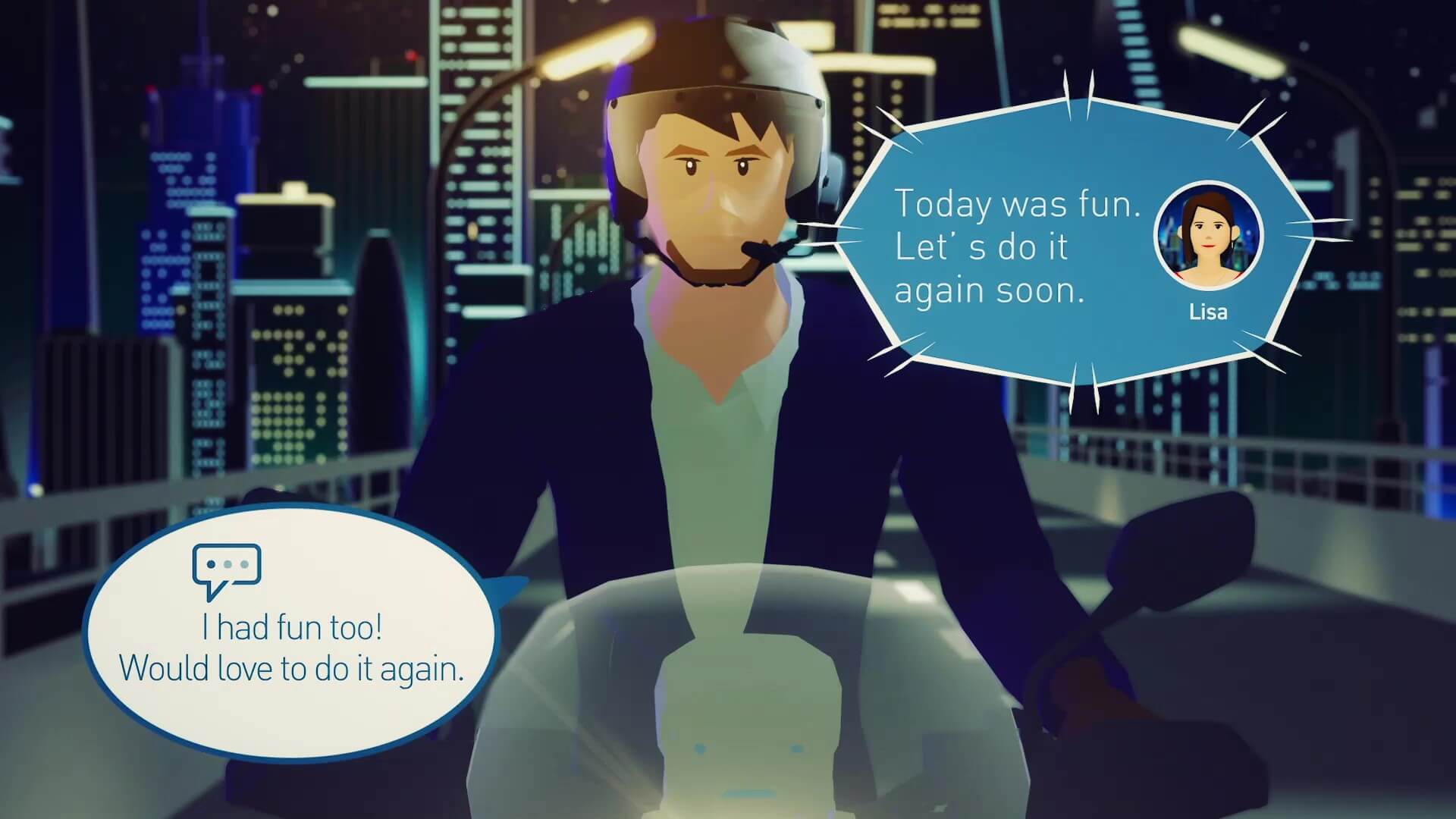 Joao: One of the concepts is that the user can use the smartphone functions that he/she is used to without any change. Another one is to provide an intuitive user experience.

Nishikawa: There are more and more needs recently to use a smartphone during a ride. Until now, Honda commercialized the Apple Car Play and Google Android Auto mainly for the larger models. We have created this new system to adopt to more models including entry motorcycles, so that the joy of traveling with a smartphone can be offered to more customers.

Osanai: Simplicity has applied to component parts themselves, and their internal designs and the interface on the smartphone app. As for the aspect of operations, we were particularly fastidious about good responsiveness. As the handlebar switch and Bluetooth® are connected by a communication method called serial communications, a delay may occur when a large volume of information is sent. We devised the design for the rider to feel the delay less, so that the interface has become smooth and user-friendly. 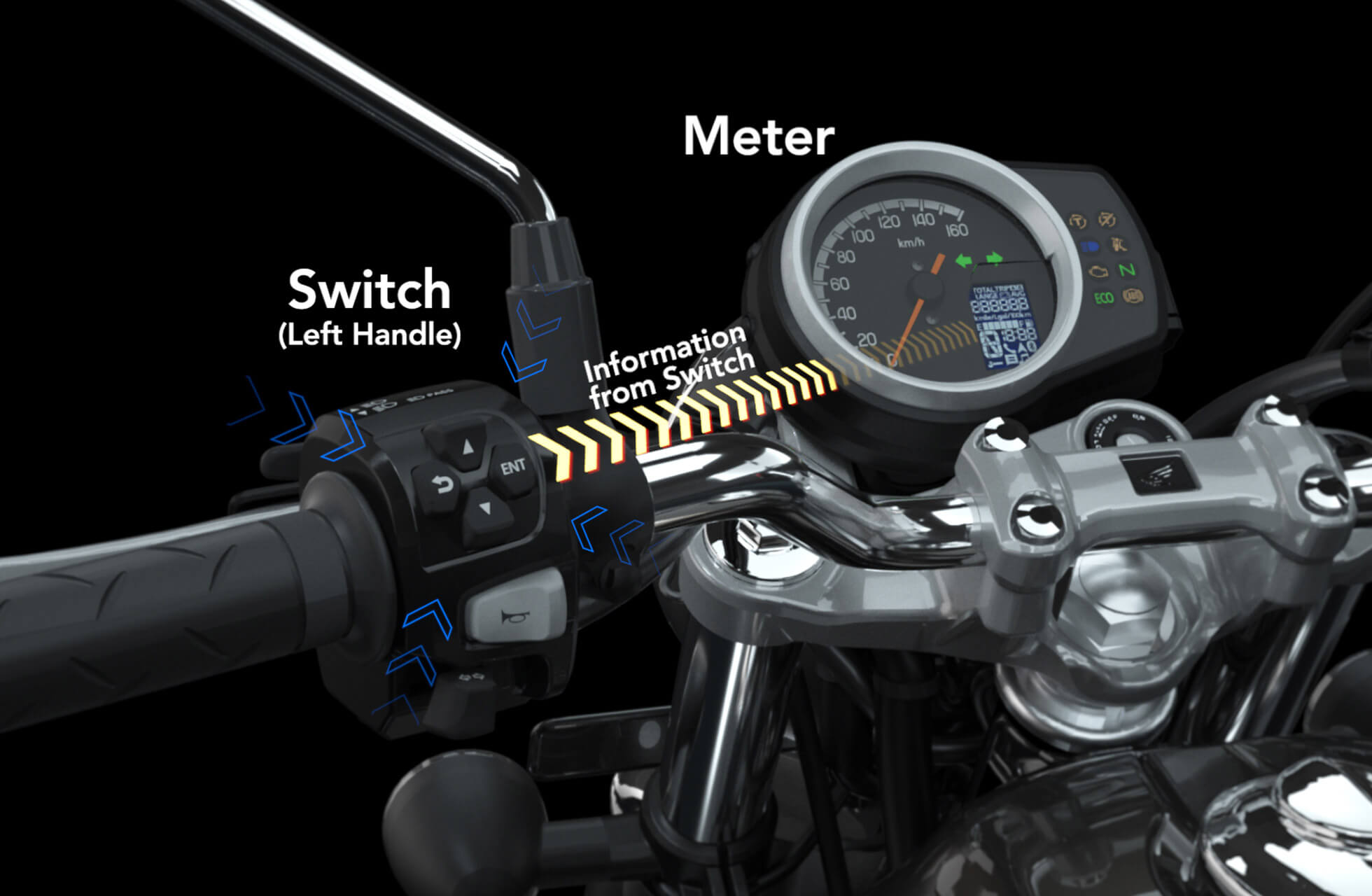 Nishikawa: We focused on user-friendliness. When a device is user-unfriendly, the rider pays more attention to operating than concentrating on riding. In order to make this system user-friendly, we put together feedback from Drive mode UX designers and Honda’s worldwide test riders. Then, we discussed thoroughly on what we could do to make it more user-friendly to build the system.

Joao: Each button operation is always responded to with voice feedback. There is some kind of a voice reaction, so the system is very easy to use.

Nishikawa: The greatest feature of this system is voice reading and voice feedback. It is very clear what menu option is being selected and what are the operational options for the next step.

Joao: I hope riding can be more comfortable using this system.

Osanai: I think it is user-friendliness. In this system, the rider can operate the app of the interface we conceived with the handlebar switch we designed. Our know-how is applied to everything including the voice feedback speed to return the outcome of an operation.

Nishikawa: Our aim was that the customers riding a motorcycle as a daily transportation means could also use this system, by making it very simple. We really wanted daily-use motorcycles to be more user-friendly. That is why the system was developed exclusively by Honda. 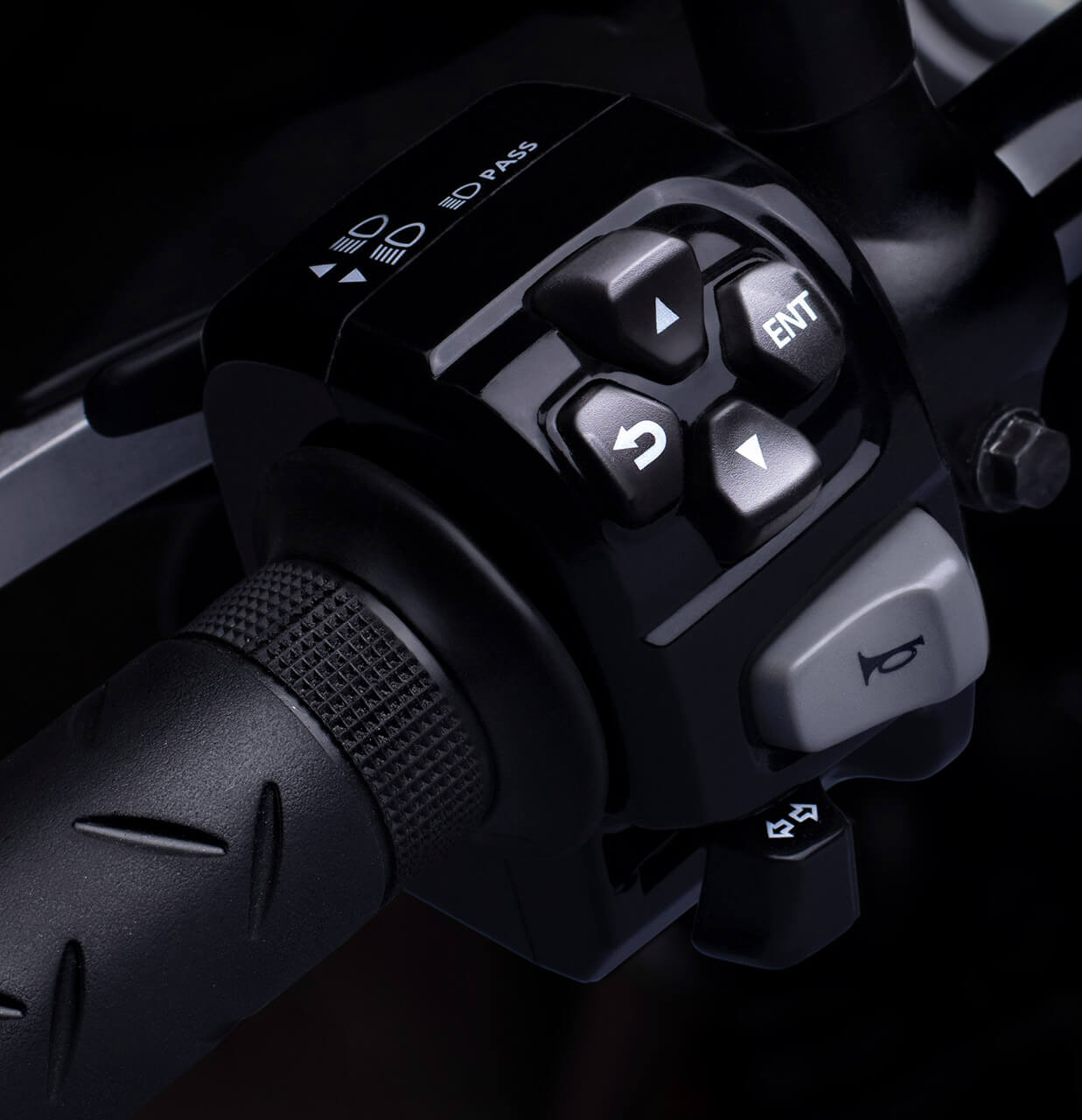 Joao: Another great feature for using it in peace is that this system is designed to reset automatically when the app has stopped working because of some defect. It is difficult to check what’s happened to the stopped app while riding. Also, the system is usable even when the smartphone screen is locked or the display is off. This feature makes the system always available, so the rider doesn’t have to check his/her smartphone each time for use. The accomplishment of this design is a major break-through point.

Handy and fun system for you and your motorcycle.

Osanai: For example, when you are on your way home from work on a motorcycle, you have received a message from your family member to pick up something from a store. In the past, you would pull over your motorcycle to check what the message was and to figure out how to get to the store, and set off to the destination to complete the mission. When the message from your family member is voiced while you are on the move, you don’t have to pull over. If you do not know how to get to the destination, you can set a destination for the navigation even while riding. We think it is beneficial to be able to communicate in peace during a ride even for daily transportation. Additionally, customers in India and Thailand tend to talk more to their family on the phone. Previously they either gave up using a smartphone while riding, or they used a smartphone anyway while riding. But not anymore. Now they can enjoy speaking with their family members with peace of mind. 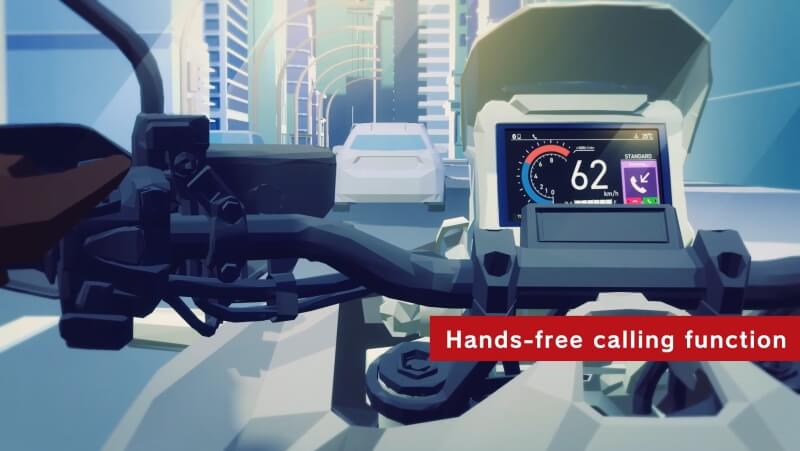 Joao: You can send and receive text messages, receive and make a call, set a destination and operate the navigation, get voice-guided directions, and play and control music. The system makes your everyday ride, group touring, and solo touring more enjoyable.

Nishikawa: It is an infotainment system with meticulously-designed simple operations. This system brings out the attractiveness of Honda motorcycles even more. Please try it. 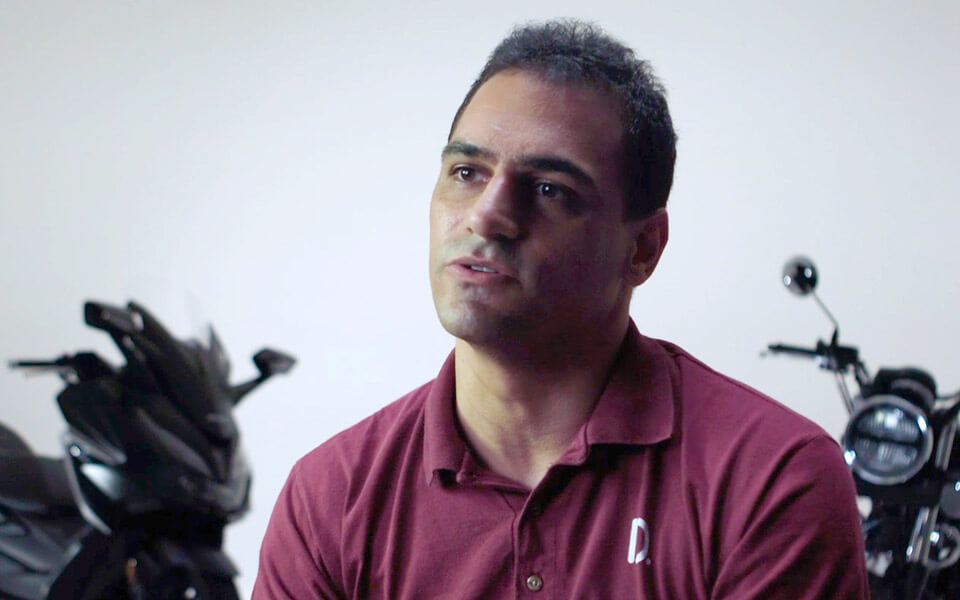 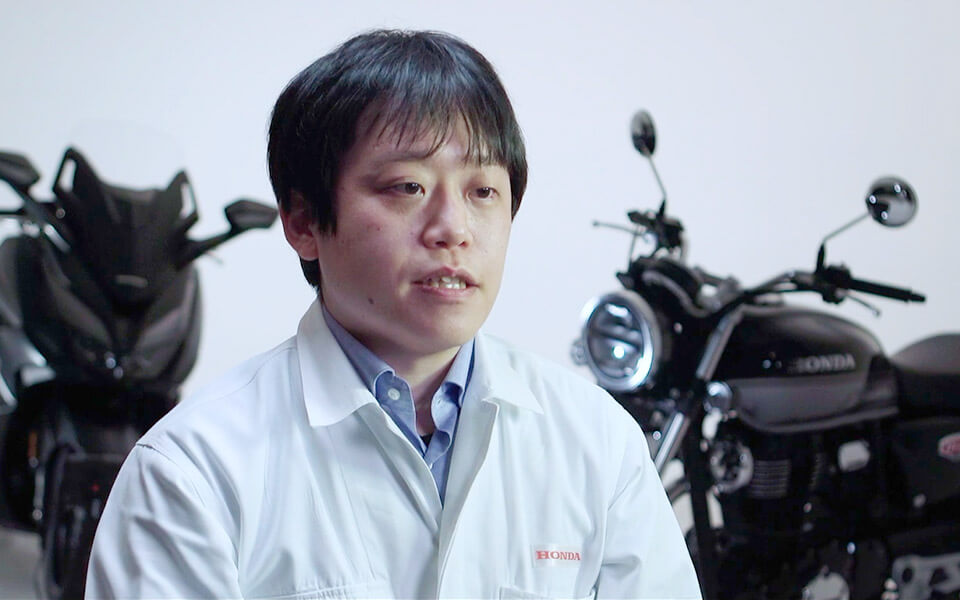 Engineer of Connected Strategy Planning and Development Division, MaaS Operations. Responsible for smartphone app development for this project. Also served as a liaison between the motorcycle development division responsible for hardware development and Drivemode, Inc., which develops apps for consistency of development from app specification formulation to verification. Engineer of Component Development Div., Monozukuri Center, Motorcycle Operations. Involved in the project from the planning stage and designed the entire vehicle systems. His responsibilities also include the Bluetooth® unit development, the basis of the system.