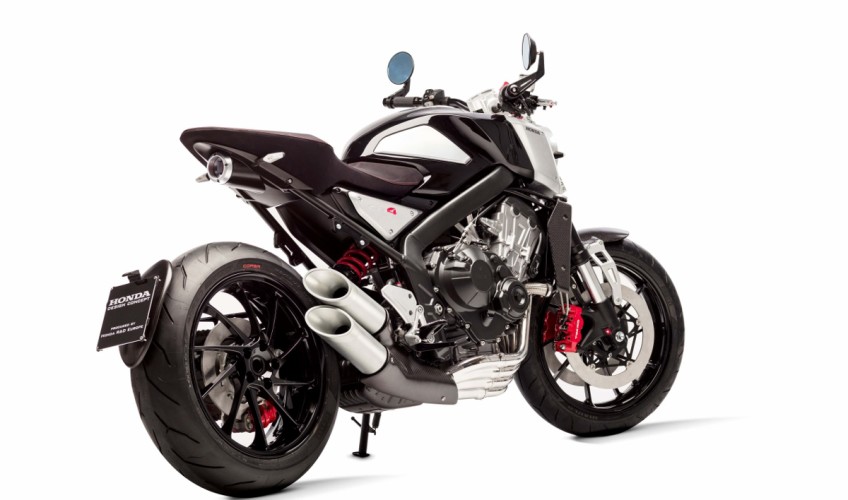 It’s EICMA time! Honda is pulling out all the stops and releasing some wild-looking concept motorcycles right now. This bad-boy has been dubbed the CB4 Concept from Honda. Will we see some form of this creation working its way into the 2017/ 2018 or beyond motorcycle model lineup? Time will tell… I for one and am excited to see what the future brings though as Honda has been known to bring quite a few of their “concept” bikes into production.

It looks like Honda took the CBR650F frame and chopped it up here and there while adding some bling to parts of the bike too.  The single-sided swingarm looks gorgeous with the wheel design they chose from the CB4 and paired up with that exhaust and minimal tail-piece it looks B-E-A-UTIFUL! This is what the true definition of a Honda StreetFighter should be in my opinion. Something that looks a little on the crazy side. Something that brings a smile to your face thinking about all of the fun you’ll have bringing your inner hooligan out!

Make sure to check out the brother to the CB4 that Honda just released info on. It’s called the Honda CBsix50 Concept – Click Here.

What do you guys think about the Honda CB4 Concept? Post up below…

⇒⇒ Stay up-to-date with all of the cool new concept motorcycles and production 2016 / 2017 motorcycles being announced at the EICMA show live right now and all this week by favoriting visiting —-> HondaProKevin.com/tag/EICMA ⇐⇐