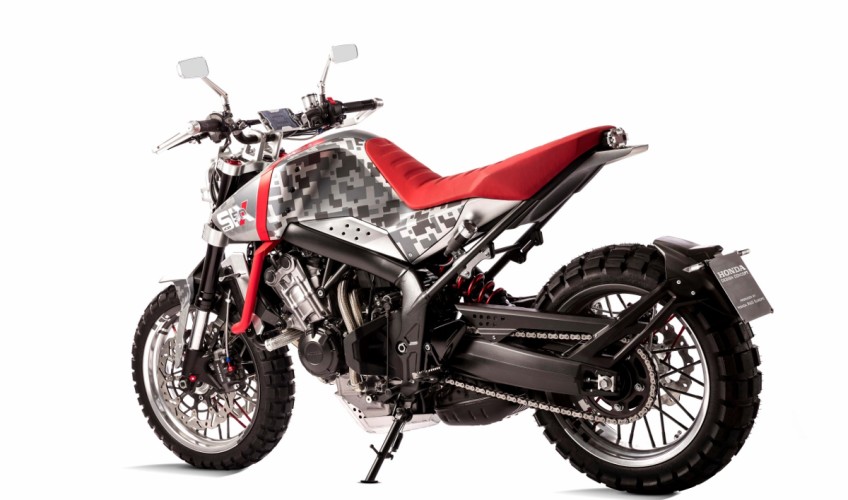 What do you get when Honda of Europe hacks up the Honda CBR650F / CB650F bike and turns it into something more along the lines of a modern-day scrambler? The Honda CBsix50 Concept!

Unlike the Honda CB4 Concept that Honda just released with a single sided swingarm and other bling bling goodies. This bike was built with a little of of adventure in mind. It’s been outfitted with spoke wheels, inverted forks, skid plate and other small pieces here and there to make it more of a bike that can do double-duty if the paved road should end. It’s still packing the CBR650F water-cooled engine that packs a decent punch with 86 horsepower.

The rumors are floating around the Honda tent at EICMA that the CBsix50 Concept has a very good possibility of making it into production through the 2017 – 2018 motorcycle model lineup from Honda. Honda will have to do quite a few changes from the way this current bike sits before it could be a production bike but I’m really liking the “idea” behind this bike. Especially if they are able to strip some weight off of that frame as it’s a little on the porky side with it the way it sits for the current production CBR650F.

If you like this style of bike, make sure to check out the Honda City Adventure Concept motorcycle that is also off-road orientated and would be a first in its class.

What do you guys think about the Honda CBsix50 Concept? Post up below…

⇒⇒ Stay up-to-date with all of the cool new concept motorcycles and production 2016 / 2017 motorcycles being announced at the EICMA show live right now and all this week by favoriting visiting —-> HondaProKevin.com/tag/EICMA ⇐⇐