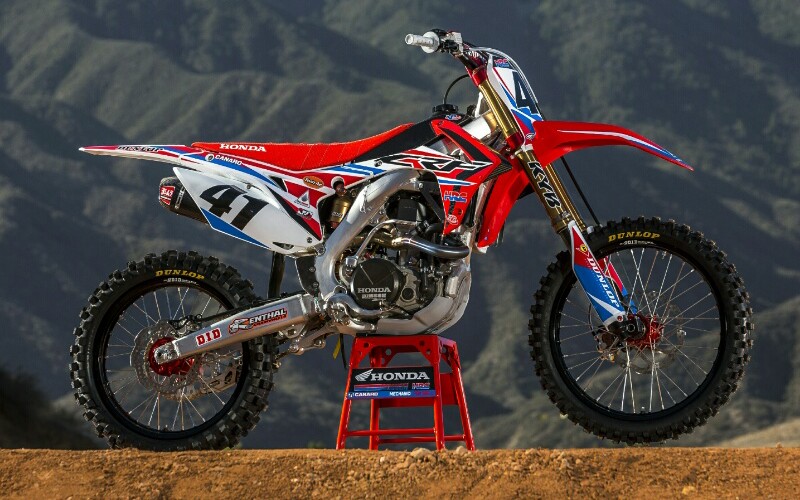 Today on November 19, 2015: American Honda officially presented its 2016 Team Honda HRC lineup to the media and team sponsors during a press event held at the team’s race shop in Torrance, California. Returning factory riders Trey Canard and Cole Seely were the stars for this overview as the team approaches the highly anticipated 2016 AMA Supercross season. American Honda also utilized this opportunity to showcase some of its additional racing efforts, with GEICO Honda, Johnny Campbell Racing and the U.S. Montesa Honda MotoTrial Team in attendance.

The day opened with an introduction from Honda HRC Team Manager Dan Betley, who reviewed the progress made during the 2015 season, mentioning that the Honda CRF450R had finished on the podium at every round of the Supercross series. Betley also discussed the changes made during the off-season to further refine the bike and program.

“It was a fun day,” Betley said. “This is the first time I can remember that we’ve had a bunch of journalists in our race shop, and it was nice hosting some of our sponsors as well. I’m eager to get this off-season over with and get back to racing, because I feel like we’re in a good place. Testing is going well, and I’m really happy with how comfortable Trey looks on the track, while Cole’s starting to get his speed back from being off the bike for a while. It’s about refinements from where we were, and I’m excited to get it started.”

Betley went on to welcome back the team’s riders, both of whom return for 2016. Canard scored two Supercross wins last year and recently won the Sugo National in Japan, and the Oklahoman looks forward to a great season next year.

“It’s always great for me to come to the shop, but I think it was really special for the people who don’t ever get to see all the behind-the-scenes stuff,” Canard said. “I feel like we have a lot of really good things going on this year, and I hope people enjoyed getting to see that. The trip to Japan really helped generate enthusiasm, and I think we’re in a good place with the bike. We haven’t changed a whole lot, but we had a great Supercross bike last year and have made progress. My goal is to finish each race, because that’s what you need to win the championship. I’m grateful and excited, because we have a great opportunity.”

Seely recorded his career-first 450 Supercross victory in 2015, finished third in the final standings and was awarded Rookie of the Year honors. The Californian, who has been rehabilitating his shoulder from injury, hopes to build upon that effort and have an even better performance in 2015.

“It was fun hanging out with the journalists here at the shop—I’ve actually only been here a few times myself!” Seely said. “It’s been a long few months with my shoulder recovery, but I’m getting back into it. I started by riding outdoors for a couple of weeks to make sure everything was strong before I hopped on a Supercross track. We’ve got a bunch of testing lined up for the next month and a half, so I should be 100% when we line up for Anaheim. I’m trying to keep the same mindset I had at the end of last Supercross season. I got the hang of the week-to-week schedule and I have a better idea of what needs to be done. I just need to carry that into next year.”

The team also used the occasion to announce Canard as the new National Spokesperson for Ride for Kids, for which American Honda has been the presenting sponsor since 1991. Ride for Kids is a national series of motorcycle events that benefits the Pediatric Brain Tumor Foundation.

“Trey is the perfect spokesperson for Ride for Kids because he has a huge heart,” said Mary O. Ratcliffe, Vice President of Marketing and Communications for the Pediatric Brain Tumor Foundation. “He exemplifies the best of motorcycling, just like Ride for Kids. On behalf of the 28,000 boys and girls in the U.S. who are diagnosed with a brain tumor, we salute Trey and American Honda for being a part of our mission to cure the kids.”

Following the introductions, members of the media were given a tour of the race shop before getting the chance to sit down with Canard and Seely for one-to-one interviews and photos. Both riders also took the time to visit with American Honda

Team Honda HRC will kick off the 2016 AMA Supercross season on January 9 at Angel Stadium of Anaheim.