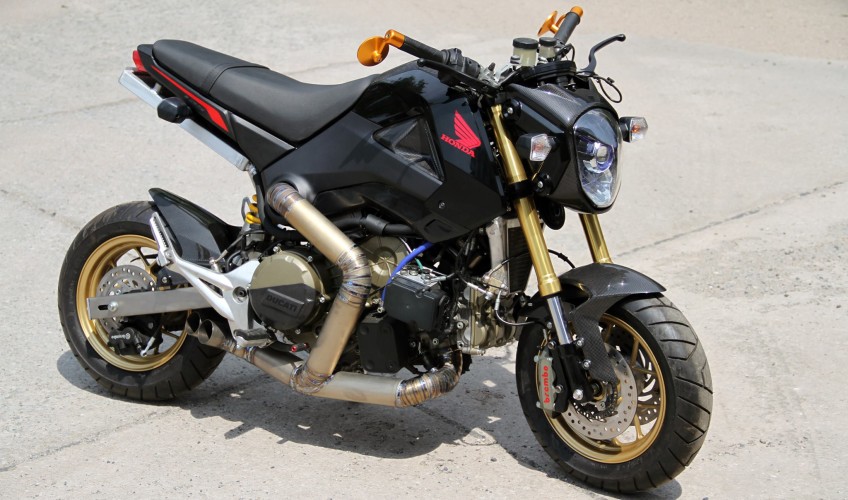 How do you know when someone needs to be locked up in the looney bin? How fine is the line that we all walk on when it comes to sanity?

You know someone has “lost it” when they can carry through and finish a project like this. As a Grom owner, I’ve dreamed and laughed at the idea with buddies on throwing X engine out of Y bike into the Grom and how much hooliganism would entail afterwards. The fun factor of doubling, tripling etc the anemic 9.7 horsepower in the Grom would be a blast.

There’s very few people that actually carry through with those crazy ideas. Whether it be money, time, talent etc to pull the engine swap off – the odds aren’t stacked in our favor when it comes to the majority of us. That’s not the case with the owner of this MSX125 / Grom…

Oh, you want to throw a CRF450X engine in your Honda Grom / MSX? A CBR250R engine swap? Bore and stroke your 125cc engine out to 235 etc? How cute! Is what the owner of this Grom / MSX had to say when he set off to make his idea and dreams a reality of throwing a Ducati 1199 R Panigale engine into his Grom / MSX. Did he throw just any old ‘ordinary’ Panigale engine in there? Nope! He went all out and crammed the 1199 R engine in there! Sticking with a measly 25, 30, 45 horsepower wasn’t enough – he wanted his Grom to have 205 horsepower!

If this story isn’t cool enough that he was able to pull it off… Right after getting the engine swap completed in the Grom / MSX, due to a fuel line leak, the bike burned up quicker than lighting a pile of cash. The owner didn’t want things to end that way though as he wanted to be able to enjoy his ridiculously and insanely fast Grom / MSX! He set out to buy another Ducati Panigale 1199 R to strip down to the bare bones for another heart transplant. Major props to this guy for not giving up when he got hit with some horrible luck.

What do you guys think? Is he crazy or a genius for pulling off this engine swap in a Honda Grom / MSX?