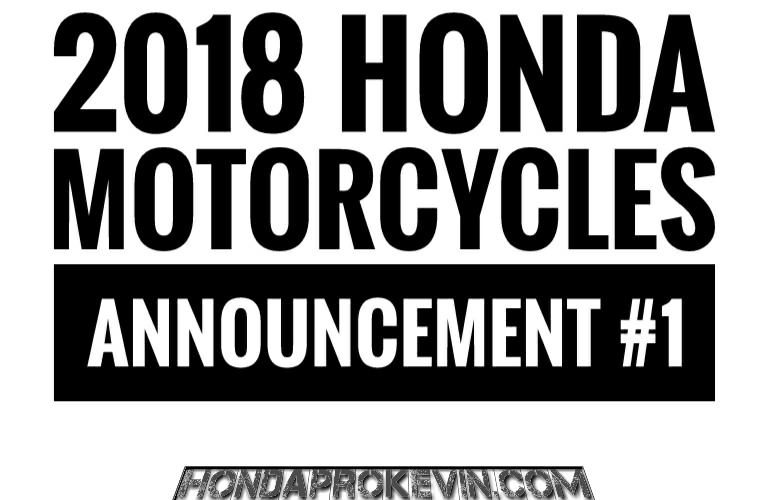 Honda has let the cat out of the bag on their first 2018 motorcycle announcement! If you follow my blog, you would have known this announcement was coming in April as I gave you guys a Sneak Peek (click here) a few weeks ago. You’ll also be able to find the timeline for the next round of 2018 motorcycles here. While we’re on the topic of announcements, check out my 2018 Honda UTV & ATV Sneak Peek by clicking over here. 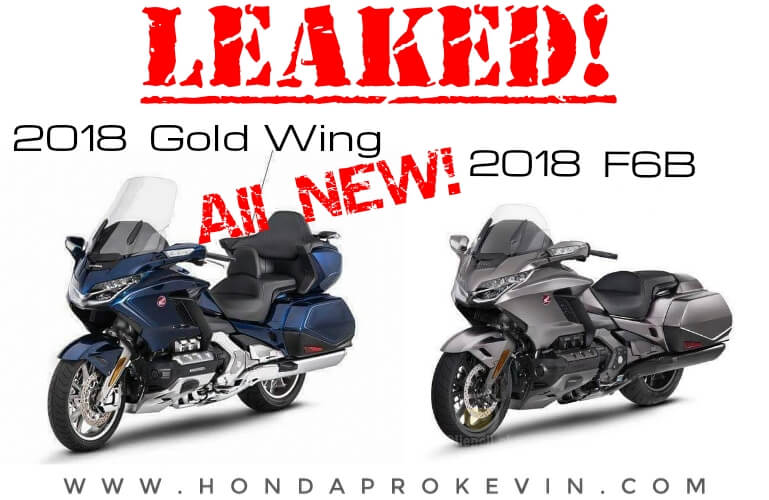 To some people, this announcement may not be that exciting as these models are only returning models for 2018 and not all-new models or models with changes and upgrades etc. Within the next week I will have a separate “review” page for each of the 2018 motorcycles listed below for those that really want to do some research on all of the nitty-gritty specs and features for each model.

First off we’ll start with the 2018 Honda NM4 that is thankfully making its return for 2018! Why do I say “thankfully”? Because we didn’t see the NM4 in 2017 like we were supposed to… Honda had already announced the 2017 NM4 and let dealers place their orders etc for this model last year but due to the earthquake in Japan that hit pretty hard, it put a huge damper on models being manufactured in Japan thanks to damage caused to their warehouses. Because of this Honda had to inform dealers that they were going to have to skip the 2017 production year for the NM4 because the delay was going to push them too far back. Long story short, that’s why you didn’t see the 2017 NM4 in dealers. 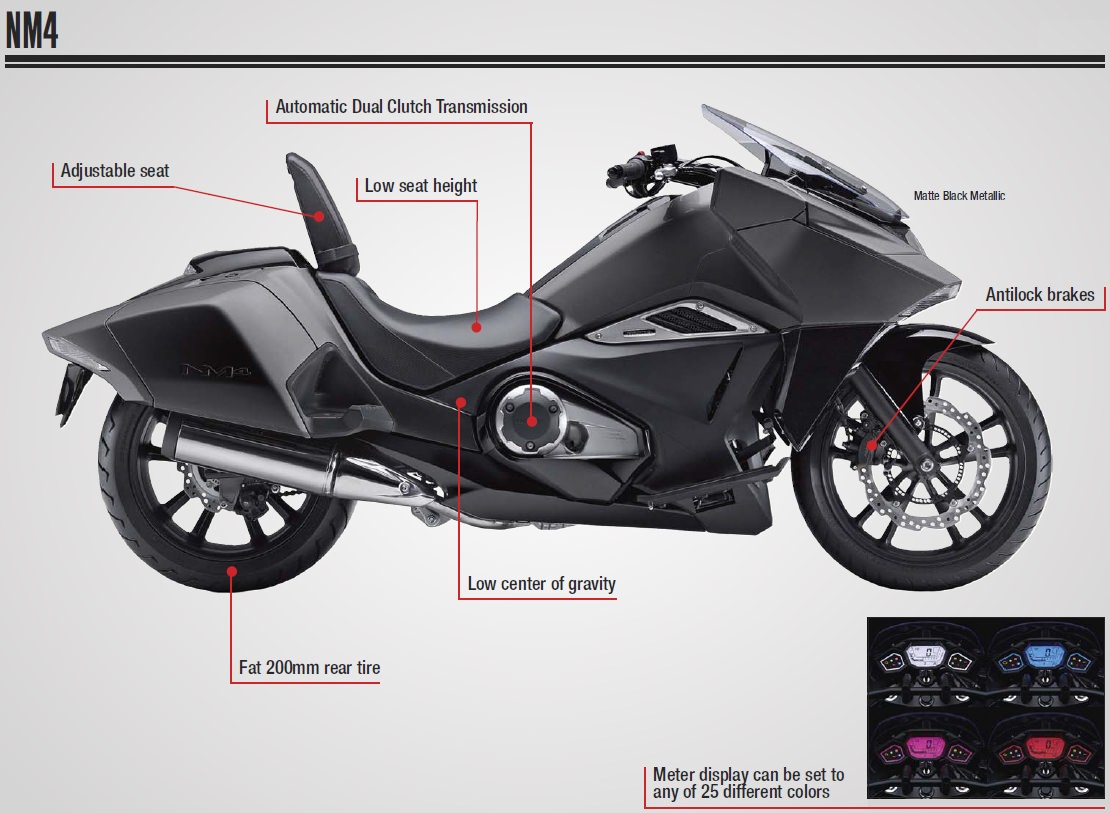 While it’s the NM4’s disruptive form that earns headlines and double takes, the model absolutely delivers in the function department as well. A low center of gravity, enabled in part by the forward-rotated mounting of the powerful, liquid-cooled 670cc parallel-twin engine, results in a comfortable, light-handling motorcycle with a low-slung, feet-forward cockpit from which it’s very easy to reach the ground at stops. The passenger seat converts into a flip-up, adjustable backrest, and the bodywork provides ample wind protection and four separate storage compartments. Gear changes are accomplished via a high-tech, smooth-shifting Dual Clutch Transmission, which has standard and sport automatic modes but can also be manually shifted via handlebar-mounted buttons. The innovative, customizable LED dash display features color-coding for the transmission modes and delivers a host of information, including fuel-mileage tracking. Competent for applications from commuting to cruising, the NM4 more than holds its own on the road. Just don’t expect to go incognito.

That’s going to be it as far as 2018 on-road motorcycles go for this first announcement. Want to find out when the 2018 Honda CBR Sport Bikes, Touring, Adventure, Dual-Sport etc motorcycles are going to be announced? Check out my 2018 Honda Motorcycle Announcement Timeline by clicking here. Now, let’s dive into the rest of the bikes that Honda just released information on for 2018 and that’s going to be their CRF dirt bike lineup. Well, not the lineup in its entirety as we’re still missing the CRF150F and CRF230F in the “trail” lineup but we do get to take a peek at the smaller cc lineup below… 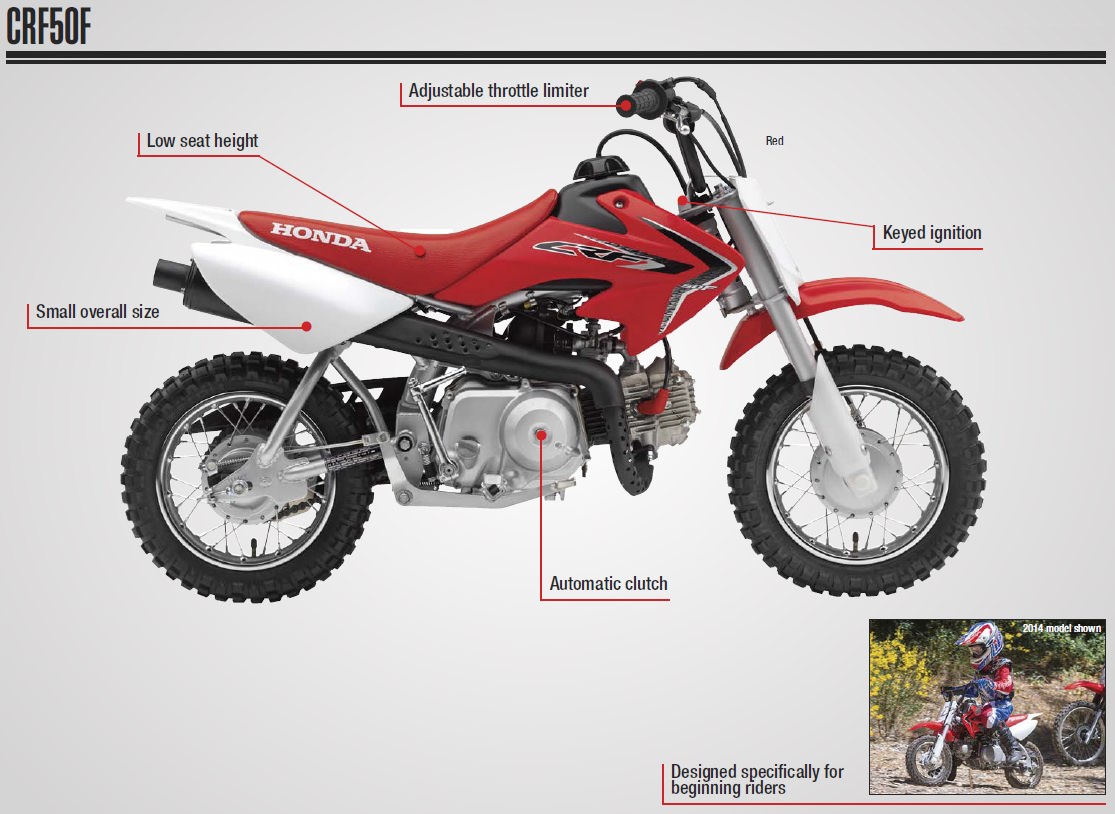 Getting the right start makes all the difference in life: eating the right food, going to the right school, learning the right lessons, establishing the right values. It’s no different when it comes to motorcycling. Starting a rider off early introduces them to something they can enjoy forever. And starting them off right pays dividends for decades to come. So when it’s time to get your young rider on his or her first bike, make sure you choose a machine that gives them all the advantages. And for hundreds of thousands of riders, the best choice is a Honda CRF50F. The CRF50F offers up an ideal combination of features: Its tough, reliable four-stroke engine develops smooth, easy-to-use power. Its three-speed transmission uses an automatic clutch, so a rider learns to shift, but never has to worry about stalling. Its tough suspension stands up to youthful enthusiasm. And for adults, the CRF50F makes sense too: an adjustable throttle limiter lets you tailor the power to the appropriate skill level, and the proven reliability means more time riding and less time taken up by maintenance and repairs. Your kids will remember their first motorcycle forever. And there’s no better way to make those good memories than by putting them on a Honda CRF50F. 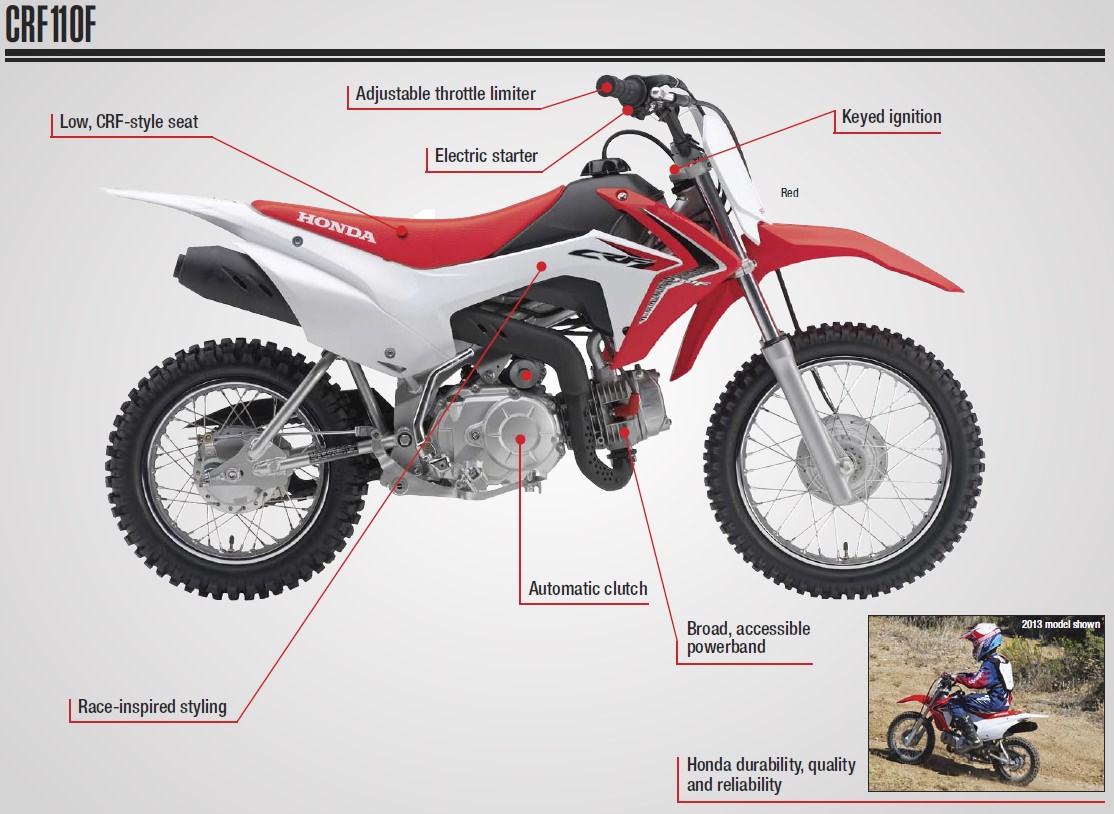 Once upon a time, a 110cc bike was a machine for adult-sized riders with some experience in the saddle. Then Honda rethought the situation. Sure, small engines make sense for smaller riders, but small engines also can mean narrow powerbands. Why not build a bike that combined the light weight and low seat height of a beginner bike with an engine that’s more beginner friendly? The CRF110F’s engine size makes it easy for our engineers to tune in a super-wide torque spread and easy-to-access low-rpm power—just what a novice wants and needs. The right size and the right power delivery—Honda’s CRF110F gives riders the best of both worlds.  In terms of seat height and weight, the CRF110F is between our CRF125F and CRF50F. It features both an effortless electric starter and a kick starter, as well. And it all teams up with our four-speed transmission with automatic clutch that’s been proven in thousands of bikes, so younger riders never have to worry about stalling or a handlebar-mounted clutch. Your rider may grow up soon, but it will be a long time before they outgrow a Honda CRF110F. 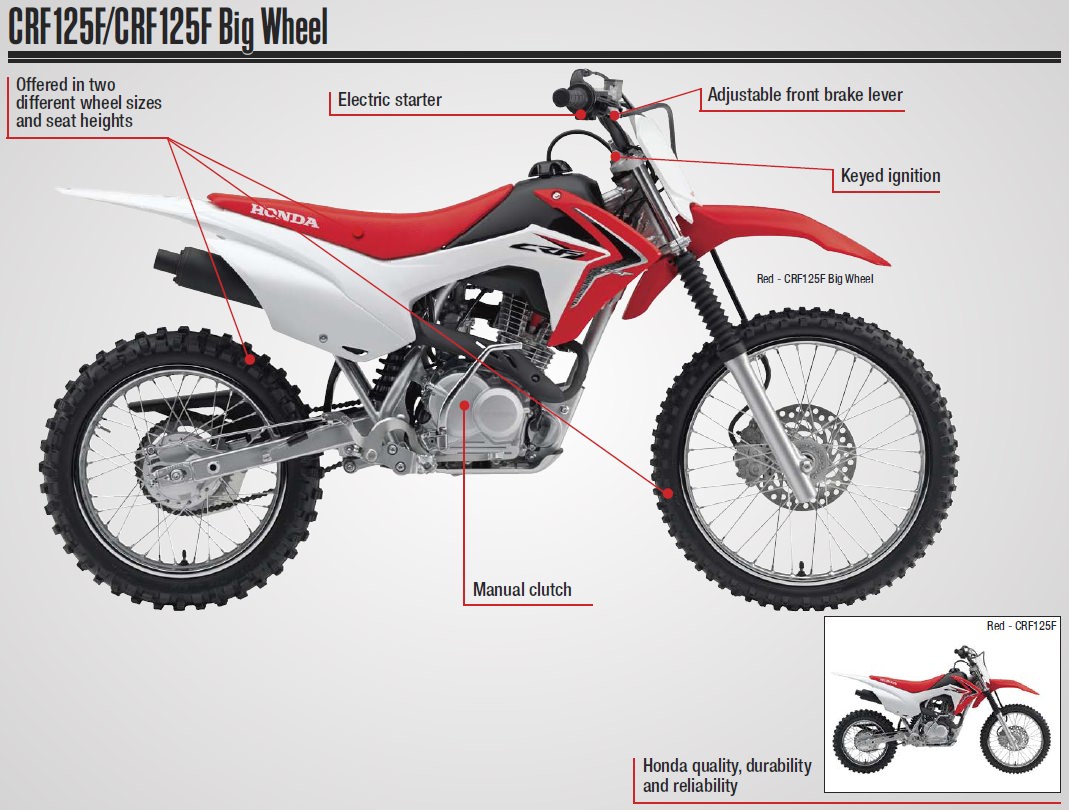 Motorcycles, especially dirtbikes, are exceptionally personal vehicles. Riding a bike that doesn’t fit right is like trying to run a marathon in shoes that are too big or too small. That’s why Honda makes a whole family of dirt bikes, with plenty of sizes in between. Here’s another thing: When Honda builds a smaller bike, they never go small on quality and features. And that’s definitely true of the CRF125F. Not only is the engine the next step up from our CRF110F, the chassis, seat height, and wheels are too. It hits that sweet spot that makes it a great choice for both young riders and smaller adults. Loaded with features designed to make trail riding a fun, no-hassle experience, it’s also pure Honda when it comes to reliability and durability, thanks in part to its rugged, air-cooled design. An electric starter makes it easy to get going, while a four-speed transmission gives you all the control of a full-sized bike.  As to the way it looks, riders young and old will be proud to ride a CRF125F. Taking its styling cues right from our full-on motocross bikes it looks sharp on the trail, in your garage, and in the truck heading towards your favorite off-road area. And as further proof of our commitment to give you the right-sized bike, we even make the CRF125F in a second, big-wheel version for taller riders.

Here’s a dilemma many riders—and parents—face: You want a bike that fits right, but one that also has the right features. It’s especially challenging with smaller dirtbikes, because often times low seat height equals fewer features. Not with Honda, and especially not with the CRF125F Big Wheel. The CRF125F Big Wheel is a simple concept, but a genius execution. We take our awesome CRF125F and set it up with larger diameter wheels and a longer swingarm. That means the bike also features a two-inch-taller seat height. The result? A combination that makes it perfect for thousands of teens and smaller adults who just want to get out on the trails and have fun. It’s loaded with features too, and since it’s a Honda, it’s also famously reliable—a big plus, because riding is a lot more fun than wrenching. Like the CRF125F, the Big Wheel version offers an electric starter that makes it easy to get underway, and its four-speed transmission gives you all the control of a full-sized bike.  The long and short of it: Sized to fit taller riders just right, but without putting them on a bike that’s too big or that gives them too much power too soon, the CRF125F Big Wheel is one of the most versatile off-roaders in our line.