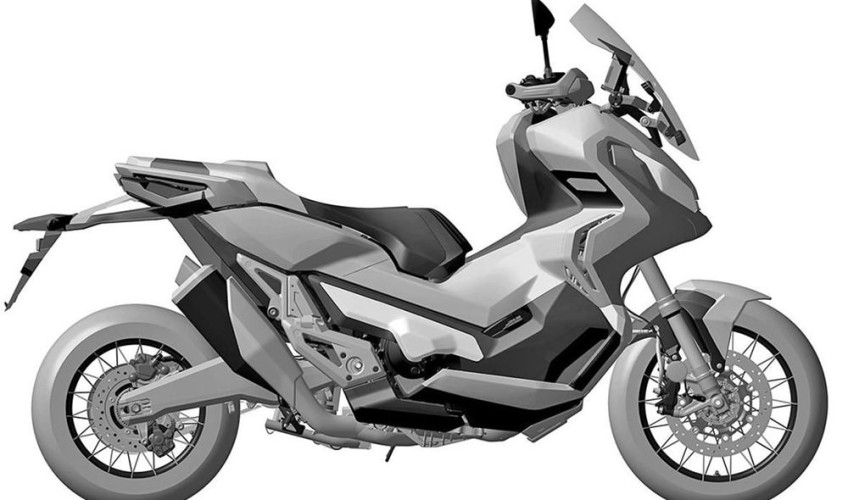 Honda introduced the City Adventure Concept scooter / DCT automatic motorcycle last year at the EICMA show. You can check out my blog post with that update from the EICMA motorcycle show by clicking here.

Since that initial unveiling of this concept bike, quite a few things have happened… What is that you may ask if you haven’t been following updates on possible up-and-coming 2017 / 2018 motorcycles from Honda. Not only has the City Adventure Concept been spotted in camouflage out testing on public streets but Honda has also filed trademarks for the name ‘City Adventure’ and ‘ADV’ which also graces the side of the City Adventure Concept.

The latest round of news and updates with the City Adventure though are a little more juicy when you pair it up with those other two key points I mentioned in the previous paragraph… Honda has now had patent images of the City Adventure ‘leak’!

What does all of this mean? It means a lot… All manufacturers will burn $$ in building concept motorcycles, scooters etc to show off what they can do and get the general public excited about what could be coming in the future. That’s nothing new. A manufacturer on the other hand will not waste the time to build a working and running prototype to test on public streets, file trademarks for possible model names and also file patents for that specific model if they don’t remotely plan on bringing it into production… That’s a lot of money to burn if you don’t plan on selling the model to recoup the costs.

What do you guys think? Would the City Adventure be a welcomed model to Honda’s 2017 or 2018 motorcycle / scooter model lineup?