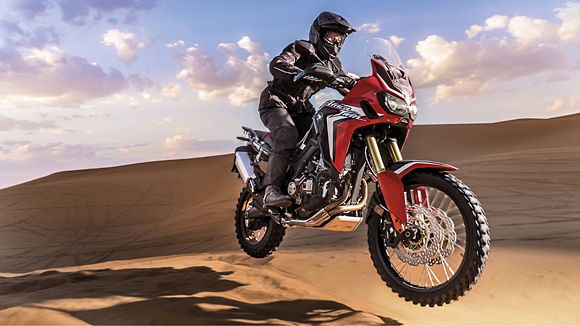 New information will be releasing on September 1, 2015. CLICK HERE for more details… 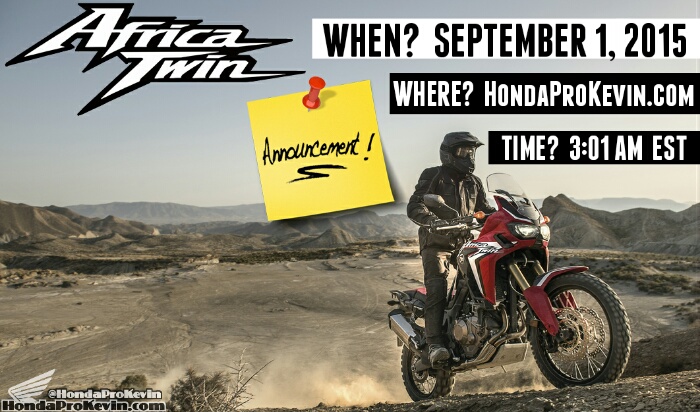 We now have the 2016 Africa Twin CRF1000L price information and horsepower rating plus even more details than what was announced previously! New spec sheet including weight, height, fuel capacity, traction control details and more! All of the details and information you’ve been waiting for on Honda’s All New Adventure Motorcycle for 2016!

This update has been a long time coming… Honda made the announcement a new Africa Twin was in the works more than a year ago now. We’ve been teased with prototype bike pictures, teaser videos and pictures, etc etc. Some were worried that the new 2016 Africa Twin wouldn’t be able to carry the nameplate of the original Africa Twin and do it with pride. 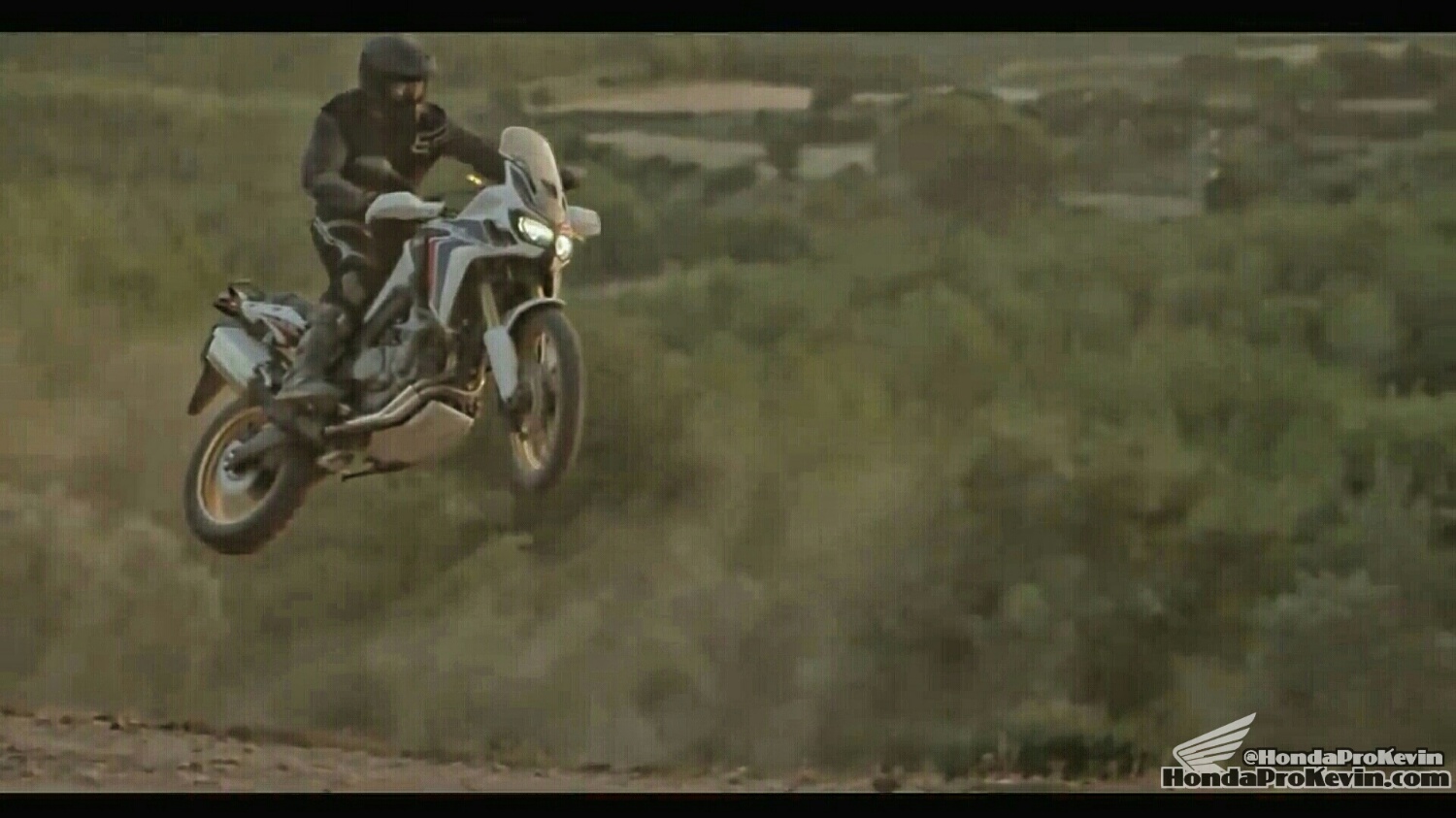 OLD information from before Honda officially released pricing for 16′ Africa Twin. I was almost spot-on with my original guess. “Honda is stating that “There will be several versions of the Africa Twin, with prices starting from €12,100″. When you do the conversion from Euros to the US dollar it comes to $13,266. The official price for us here in the US has not been announced at this time but we have a ballpark now.”

2016 Honda Africa Twin CRF1000L Photo Gallery: Check out some of the All New pictures of the latest 1000 cc Adventure Bike from Honda at the bottom of the page. Plenty of pictures of the Africa Twin in action off-road. Everything from playing in the dune to up in the mountains.
Below you’ll find the 2016 Africa Twin CRF1000L video that was leaked and posted on YouTube. We can thank the guys at ADVpulse.com for somehow getting their hands on this leaked Africa Twin video. In the video you’ll find the R&D team discussing the CRF1000L and giving their thoughts about the project. You can tell the passion they have for what they do by listening to them speak about the bike. When you have people with that much passion as well as the guys behind the original Africa Twin, it’s hard to go wrong…

Check out the video of the 2016 Africa Twin in action (below) showing off its 94 horsepower in action as well as hitting jumps soaring through the air. Post up below after you check it out and give us your thoughts on the bike after finally getting to see it in action.

July 24, 2015 – 2016 Honda CRF1000L / Africa Twin Press Release: Honda is pleased to announce further technical details on the new CRF1000L Africa Twin, which will be in Honda showrooms across the United States in early 2016. Like its celebrated forerunners, the CRF1000L Africa Twin is thoroughly equipped for true adventure, with a potent engine and dynamic chassis ready to explore continents, on- or off-road.

From the start of the CRF1000L Africa Twin project there was one motorcycle that consistently impressed with its balance of usability, poise and handling, on the road and in the dirt—the seminal XRV750 Africa Twin. It proved a worthwhile benchmark, even when set against today’s myriad choice of adventure motorcycles. The machine that now bears its name shares no common parts with the old model but it inherits the full the essence and spirit of what made the XRV750 Africa Twin so good.

The “true adventure” approach starts with the engine, which has to perform in off-road situations as well as on-road long-range touring and all points in between. The CRF1000L Africa Twin’s 998cc parallel-twin power plant draws heavily on Honda’s off-road race experience with the CRF250R/450R competition machines, and uses the same four-valve Unicam head design for compact overall dimensions. A lightweight cast camshaft—using the same materials as that on the CBR1000RR—operates the valve train, and twin spark plugs fire the fuel/air mixture in each combustion chamber.

The engine’s short height contributes to the CRF1000L Africa Twin’s excellent ground clearance—another prerequisite for a true adventure machine. It also uses clever packaging of componentry to both dynamic and aesthetic effect. The water pump is housed within the clutch casing, and the water and oil pumps are driven by a shared balancer shaft. Further reducing engine size is the lower crankcase design, which stores the oil and houses the pressure-fed pump.

The lightweight six-speed manual gearbox uses the same shift-cam design as found on the CRF250R/450R to ensure positive changes and is equipped with an assist slipper clutch.

For the CRF1000L Africa Twin’s chassis, three key attributes—highlights of the original XRV750—were targeted: off-road performance, touring comfort and the everyday agility that makes for a great all-rounder or day-to-day commuter.

A steel semi-double cradle frame provides a balance of highway touring capability—even while fully loaded—genuine off-road performance, agility and sheer strength. Mass centralization—with items like the battery packaged at the rear of the cylinder head—contributes to a low center of gravity.

Following its design theme of “unlimited adventure,” the Africa Twin is styled with minimum bodywork in a tough, lightweight form that offers both weather protection for the rider and a slim, agile feel. Dual headlights maintain the original’s signature presence and the seat height adjusts .8 inches to either 34.3 or 33.5 inches. A large 4.96 gallon fuel tank—coupled with the engine’s fuel efficiency—stretches the distances between refueling stops.

To tailor the overall electronics package to capably tackle any conditions on- or off-road, the Honda Selectable Torque Control (HSTC) system offers three levels of control, and it is possible for the rider to turn off the ABS system for the rear wheel. (HSTC and ABS not available on base version; equipped as standard on DCT/ABS version.)

The CRF1000L Africa Twin will be available in two color options for the USA: Red / Black / White Dakar Rally and Silver. While the rest of the world has the option of those colors plus the Tri-Color with gold wheels and black to choose from.

Honda’s unique Dual Clutch Transmission (DCT) will be available as an option on the CRF1000L Africa Twin, with the use of a common crankcase keeping the width the same as the manual transmission version.

In certain situations on the road, such as during low-speed maneuvers, the DCT partially disengages the clutch to reduce the effect that quick throttle movements have on the chassis. Of course, DCT for the CRF1000L Africa Twin is also fully equipped to operate in an adventure environment. With the G switch on in any riding mode, the connection between the throttle and the rear wheel is more direct, which can be desirable in certain off-road situations.

Further new functionality for the DCT system comes in the form of incline detection. During ascents, upshifts are delayed in order to allow a higher rpm to be held; on descents, downshifts happen earlier to enable better engine braking. Original link for the press release can be found here.

We still had another missing piece to the puzzle even with having the video leaked on the new Africa Twin yesterday. We needed specs, all of the fine details that can make a difference on whether a bike will be a flop or not. Honda officially released the specs you’ll see below today on July 24, 2015. Could it have been released today because of the information leaked over the last 48 hours? We don’t know for sure but the upside is we now have more detailed specs on the 2016 African Twin. Granted, it isn’t the entire spec sheet but it’s more than we had so it’s definitely something to keep us happy and entertained until Honda releases the other details regarding MSRP pricing as well as suspension travel with a few other key points.

Leaked 2016 Africa Twin / CRF1000L Spec Sheet by Honda of Portugal pictured below. Shortly after the image was posted, it was taken down but not before a forum member took a screenshot of what he stumbled across. 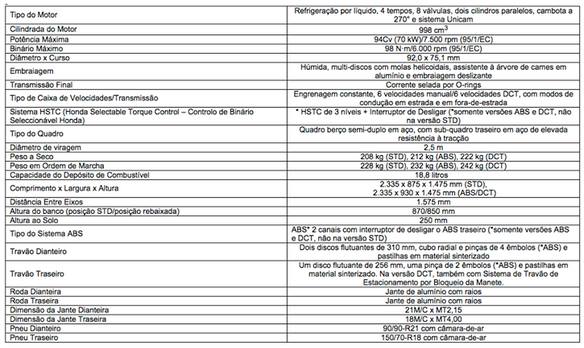 If you’re a motorcycle buyer that goes off of spec sheets alone then you might be turned off by a couple of points. Some were hoping to see horsepower numbers for the new Africa Twin to exceed the 110 HP mark while coming in at the sub 480 lb point when thrown on a scale. Horsepower numbers don’t mean everything, of course in a drag race that’s a different story but off-road where a true adventure bike like this should be – all the power in the world isn’t a necessity. To touch on the Africa Twin weight, Honda has shown time and time again they can make a big bike (not saying the AT is big) feel like it shouldn’t weigh anywhere close to what the curb weight shows on its spec sheet. In the video, it’s a key point that they touch on as well so keep an ear out for the R&D and designers comments on the weight subject.As you can see by looking at the leaked info on the spec chart above for the CRF1000L, a few details are still missing… A couple of the key points are still missing as far as suspension travel, pricing for the DCT model, etc.

It was interesting to listen to the Africa Twin test riders comment on the DCT transmission for the CRF1000L. With some people, of course, it’s going to be a “no-go” as they don’t like the thought of having an automatic transmission on their motorcycle. I’d bet money once people give it a try first-hand and experience what it’s like with the DCT, they will fall in love with it and even more so when riding aggressively off-road. Where the bike is meant to be. Even on the road though, the DCT will spoil you. Especially when and if you’re commuting going from red-light to red-light etc. I’ve noticed while riding a DCT Motorcycle that I pay a lot more attention to my surroundings and that never hurts with the lunatics in cars & trucks that we have to dodge daily as riders. Some could say though that you might become “lazy” and start paying less attention to actually riding since the bike is doing technically everything for you. That’s where the manual shift mode comes in though and really bumps the fun factor up a couple notches. The DCT versus manual transmission on the 16′ Africa Twin will be an opinion based decision though as you have pros and cons to both sides of the debate.

Will the All New Africa Twin of the 21st century be worthy of the Africa Twin nameplate that was made famous more than two decades ago? Only time will tell and thankfully that time is inching closer day by day as the 2016 Africa Twin / CRF1000L scheduled release date for certain corners of the world is by the end of the year. Sadly, us in the USA will have to wait until the 2016 calendars get started…

What are your thoughts after finding out this new leaked information and details on the specs for the 16′ Africa Twin? Any particular piece of new info that just sealed the deal on purchasing a CRF1000L or not purchasing? Post up below and let’s hear your opinions.