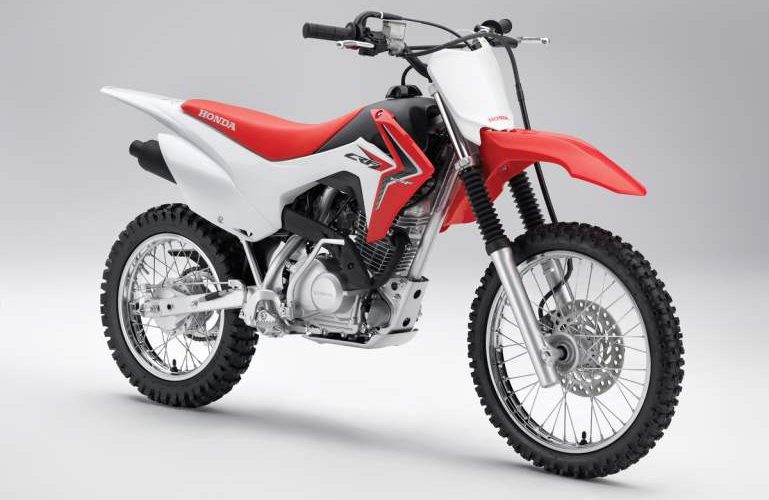 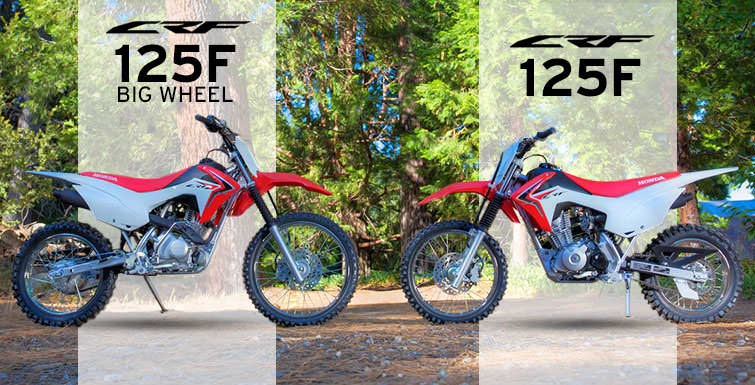 The perfect first dirtbike, featuring a low-maintenance air-cooled engine with strong bottom-end torque, manual four-speed gearbox and clutch, a super-tough chassis and CRF450R-inspired bodywork. Just a few years ago the CRF110F replaced the immensely popular and iconic CRF70F (previously known as XR70) within Honda’s family of fun, entry-level CRF off-road bikes. Next up for the CRF model lineup as far as changes go were the two new larger-displacement CRF125F models, allowing consumers more choices in this market segment. The two CRF125F models offer unique wheel sizes that allow them to replace the CRF80F and CRF100F. With a seat height of 28.9 inches, the small-wheel CRF125F seat is the same height as the CRF80F it replaces, while the CRF125F Big Wheel features the same seat height—30.9 inches—as the CRF100F it replaces. This seat-height option allows riders to pick the CRF125F that fits best. Featuring an all-new electric-start 125cc single-cylinder OHC four-stroke engine tuned for loads of low-end grunt plus plenty of pull throughout the powerband, the CRF125Fs also feature a four-speed gearbox. Add a new rolling chassis with upgraded suspension components front and rear plus styling just like Honda’s CRF® motocross bikes, and you have a great addition to Honda’s off-road line of family machines with a bike for all riders—young to old, beginner to expert.

Not only is the engine the next step up from our CRF110F, the chassis, seat height, and wheels are too. It hits that sweet spot that makes it a great choice for both young riders and smaller adults. Loaded with features designed to make trail riding a fun, no-hassle experience, it’s also pure Honda when it comes to reliability and durability, thanks in part to its rugged, air-cooled design. An electric starter makes it easy to get going, while a four-speed transmission gives you all the control of a full-sized bike.

Riding off-road on trails, motocross tracks and back yards is an activity that often involves the whole family. For children it’s a perfect introduction to motorcycling that quickly builds skills and machine control, so useful in adult life whether in competition or out on the open road. For Honda, attracting young riders early in their career is a great introduction to the brand and its engineering values.

Honda’s CRF range spans recreational and competition off-road machines and is steadily becoming a brand within a brand. The CRF50F and 110F get youngsters riding early, having fun and learning, while the CRF250L add road-going dual-purpose and Supermoto attitude respectively. For Enduro use, the CRF250X and 450X are the ideal tools for the job. And the awesome CRF250R and CRF450R – with state-of-the-art engines, frames and suspension – stand at the pinnacle of Honda motocross racing technology and inspire every other CRF in turn. Honda’s return to the Dakar rally with a works team for the first time since 1989, with the CRF450 Rally, further underlines the importance of off-road racing to the company.

Replacing the CRF100F, the CRF125F – and big-wheel CRF125FB – not only features a larger capacity; its air-cooled four-speed engine has been tuned specifically to give plenty of novice-friendly bottom-end torque. The addition of electric start also makes life easier for the young rider.

In essence the CRF125F is built to be everything the young entry-level rider could possibly hope for as they continue their off-road journey. It’s tough, reassuring, easy to look after and a whole lot of fun. Which is actually what the final “F” in every CRF-F model stands for – Fun.

“The new CRF125F keeps the easy-to-handle body size of its predecessors but features a new, improved engine. It also has a new look, fuller functionality and many other features, all at an affordable price. I hope the CRF125F will encourage even more people to try their hand at, and enjoy, both riding and competing off-road.”

A brand new steel diamond backbone frame gives the CRF125F chassis the perfect balance of rigidity and strength ensuring a stable and engaging ride. The integrated air box/battery design – fitted lengthwise in the frame – keeps the bike slim and a seat height of 28.9 inches (30.9 inches for the CRF125FB; figures stated in brackets where different) makes it very manageable for most youngsters aged 10 and above. Wheelbase is 48 inches (49.4 inches on Big Wheel) with rake and trail of 27°/81mm (27°/94mm). Curb weight comes in at 192 lbs.

For stability and traction front wheel size is 17-inch, matched by a 14-inch rear. For a bigger bike feel and improved stability the CRF125FB uses a 19-inch front and 16-inch rear. A 220mm front hydraulic disc brake – with adjustable span lever – deals out consistent and easy to modulate stopping power. It’s complemented by the 95mm drum rear.

New contact points – wide-set footpegs and brake pedal – match narrower handlebars and give great control. The grips employ the same ‘half-waffle’ rubber as used on the CFR450R: the waffle ridges give improved fingertip sensitivity and subtler throttle feel. A redesigned kickstart lever hinges at the bottom for better leverage.

The CRF450R’s ‘triangle proportion’ bodywork transfers readily to the CRF125F and the same benefits – complete freedom and ability of the rider to move around – are evident. Fuel capacity is 1.1 gallons and ignition is secured by key. The Extreme Red and Ross White graphic treatment provides the finishing CRF signature.

Robust and low maintenance the 124cm3 air-cooled SOHC engine powering the CRF125F delivers strong and linear bottom-end torque – a significant step forward compared to the CRF100F. The focus of Honda’s engineers was around speeding up gas flow velocity, and reduced valve overlap and lift generate performance gains at low-rpm and low-speed. Bore and stroke is set at 52.4 x 57.9mm. Peak horsepower of 8.9 HP arrives at 7,000rpm, peak torque of 7.52 lb/ft @ 4,500rpm.

Fed by carburetor, a new airbox design – located lengthwise – saves weight, increases airflow and also locates the compact battery needed for the electric starter. The air filter uses the same type of element as the CRF450R for a greater surface area and increased air intake volume. Powerful, zero-fuss CDI ignition also boosts performance, as does the new exhaust. The drive sprocket cover is no longer integrated with the ACG cover for improved accessibility when replacing the front sprocket. The four-speed manual gearbox and clutch – a key part of the first real dirtbike philosophy – are smooth changing and easy to use.