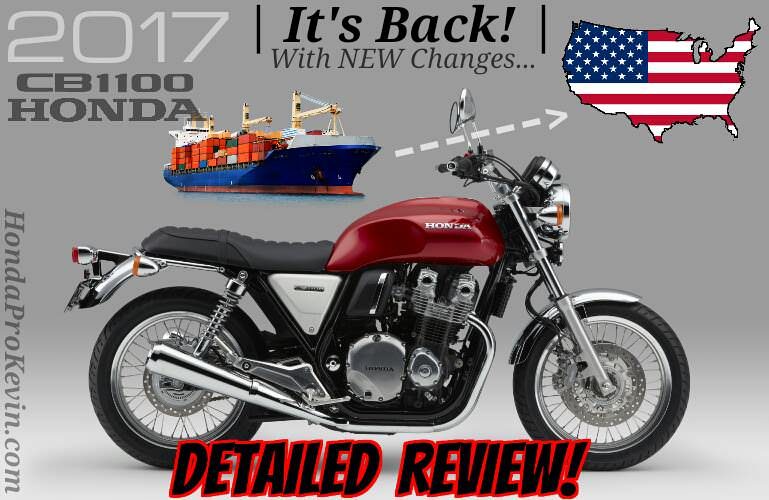 Honda was in a sneaky mood today… Why do I say that? Honda stated to us dealers over a week ago that they were done with 2017 motorcycle announcements for the rest of 2016 but… Today, December 9th, 2016 – Honda decided they wanted to be ‘sneaky’ and roll out this 2017 motorcycle model announcement without giving dealers or the public a heads up that it was coming. I’m not complaining though! What 2017 motorcycle did they announce today? The newly changed-up 2017 Honda CB1100 EX!

To the rest of the world, they are familiar with the EX version of the CB1100 as Honda has been selling it on the other side of the pond since 2014 which was the first ‘upgrade’ year for the CB1100 following the initial launch of the 2013 CB1100 when the original CB1100 as we know it was released here in the USA. In 2014, we were introduced the CB1100 Deluxe here in the USA where the rest of the world were blessed with the EX variant of the 1100cc CB.

2014 was the last production year of the CB1100 here in the USA. As I pegged in previous blog posts, I didn’t see Honda redesigning this bike and or bringing the newer variants from overseas to our side of the pond in the USA until Honda of America had cleaned out some existing inventory. The CB1100 was a reasonable success in 2013 but they butchered sales of the 2013 model when they released the 2014 CB1100 with a host of changes. This led to many dealers sitting on leftover 2013 CB1100 bikes for years to come and if you look hard enough (you really don’t have to though), you’ll find some dealers that still have new and unsold 13′ CB1100’s laying around. The same can be said about the ‘base model’ black 2014 CB1100 as the Deluxe version of the 2014 CB1100 has murdered its brother in sales and that’s putting it nicely. It did demand a price-tag that was over $1,000 higher but what you got for your money made it well worth the added expense but most importantly it had the ‘old-school’ vintage / retro motorcycle styling that everyone into these style of bikes wanted. If you dig the blacked out color-scheme though and don’t want dual exhaust, candy red paint, ABS brakes and a larger fuel tank you can find these leftover 2014 CB1100 models around too at a steal of a price.

Enough of the history lesson though as I’m sure that’s not why you guys are here in the first place. You want to know about the 2017 CB1100EX so let’s get back on topic about her! 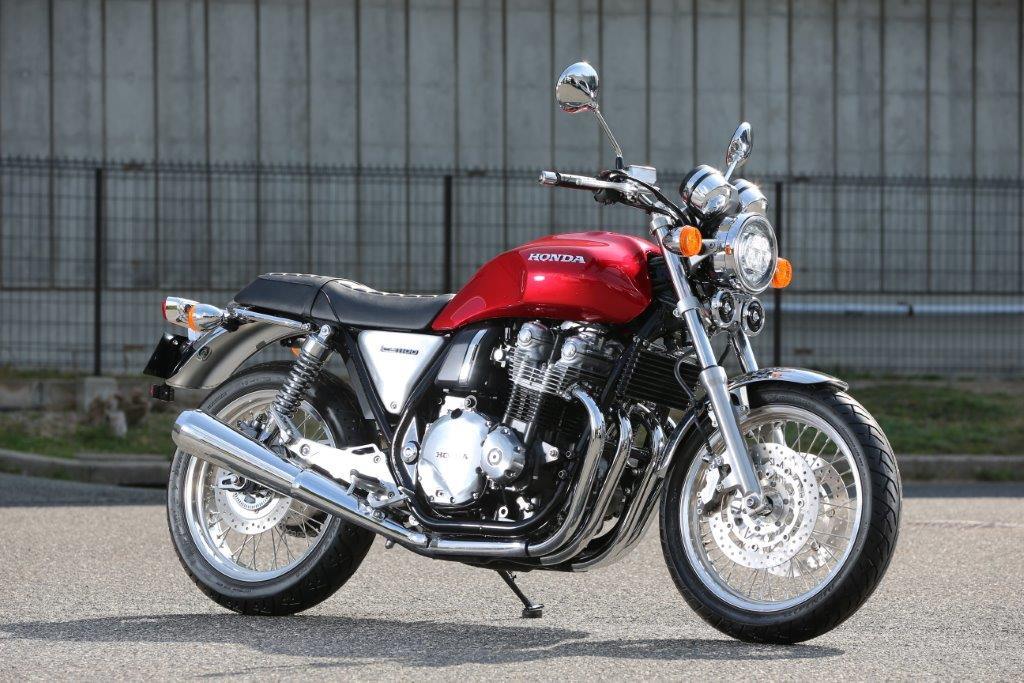 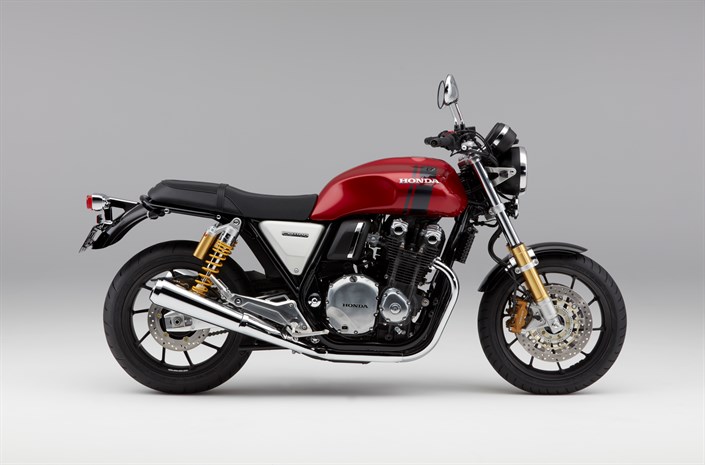 * Keep in mind, we are not getting the 2017 CB1100 RS variant here in the USA. Sadly… In my personal opinion, it’s the better looking of the two but that’s the awesome thing about the motorcycle market is that we don’t all have to like the same style when it comes to the ‘looks’ department as with all of the manufacturers out there – you have a ton of cool 2017 motorcycles to choose from. Plus, we are seeing the vintage / retro / cafe racer style bike segment grow more and more as of lately if that’s the kind of motorcycle you’re into which I’m assuming you probably are if you’re reading this specific blog post. Why am I including the 17′ CB1100RS if we it’s not releasing in the USA? I’m assuming you’re like me and still like to look at interesting information on motorcycles whether or not we can actually buy them here in the USA and a lot of times it gives us some insight into what we could possibly see in the near future. Case in point… This 2017 CB1100 EX was announced overseas over a month ago and BAM! Now, it’s trickled down to us on this side of the pond.

I hope you like red… Well, Candy Red to be specific as that is the only color we’ll be getting again this go-around on the 2017 CB1100 EX here in the USA.

Honda hasn’t released the official price yet to dealers or to the public. I’ll update this post as well as my main review blog post on the 2017 CB1100EX as soon as I have that information. I would expect the 2017 CB1100’s price / MSRP to come in right around the $12,199 mark as that is close to where the Deluxe ($11,899) left off a few years ago and that gives them some room to increase the figure just slightly from where it was at before. I’d almost bet money it’ll be +$400 / -$400 of that number though. What do you guys think the price-tag will come in at here in the USA?

Without you guys reading this, this blog wouldn’t be here and you can read my opinions on everything under the moon on here. I love to hear the feedback from you guys though as it gets old hearing my own ramblings bounce around in my head every day haha. Long story short…

What do you guys think? Will the CB1100 be a flop for 2017 in the USA or do you think the Changes / Upgrades will be welcomed with arms wide-open and customers getting their wallets open faster than they did on the 2013 – 2014 CB1100? What other changes do you think Honda should have thrown at the CB1100 while it was under the scalpel?

Here’s the official press release from Honda about the 2017 CB1100 EX:

Since 1959, when they first adorned the twin-cylinder CB92 Benly, the letters CB have always meant a great deal to Honda and Honda owners. They came to mean even more in 1969, as the four-cylinder CB750 represented a seminal moment for motorcycling, as the world’s first production superbike took center stage, laying down a blueprint that still stands today.

Old school became new school in 2013, when Honda brought the CB1100 to the U.S., satisfying pent-up demand from an army of riders for whom a traditionally styled air-cooled four-cylinder CB was a must-have piece of engineering craftsmanship. For 2017, the CB1100 EX has been imbued with extra layers of retro style and several performance upgrades. Manufacture takes place in Honda’s Kumamoto factory, with a production process that’s been fundamentally revised to integrate technology and expert skill in order to create motorcycles rich in craftsmanship and attention to detail, plus a place in history that only comes with the passage of many decades.

“As with past CBs, we understand the timeless pleasure that our customers get from owning and riding an air-cooled inline four-cylinder motorcycle,” said Mr. Mitsunobu Imada, Large Project Leader for the 2017 CB1100 EX. “Building on the CB1100’s desirability and joy of ownership, while adding functionality and quality to deepen the sense of fulfillment, were very important elements for us to consider. With the CB1100 EX, we hope many riders get to appreciate and understand a very traditional motorcycle structure.” 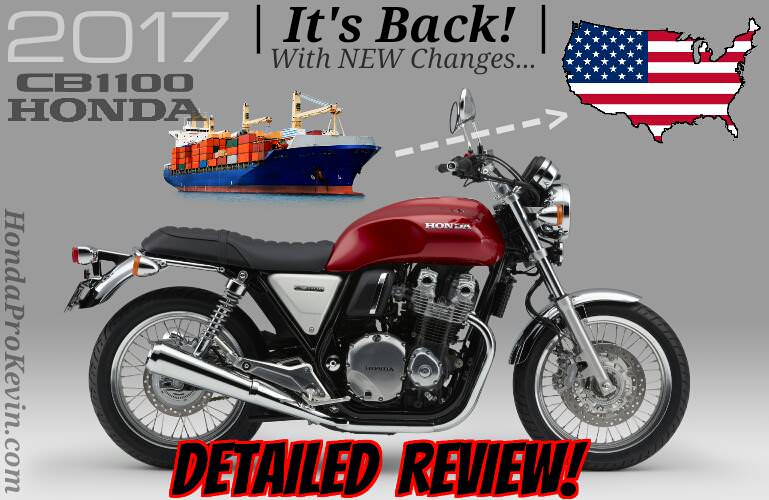