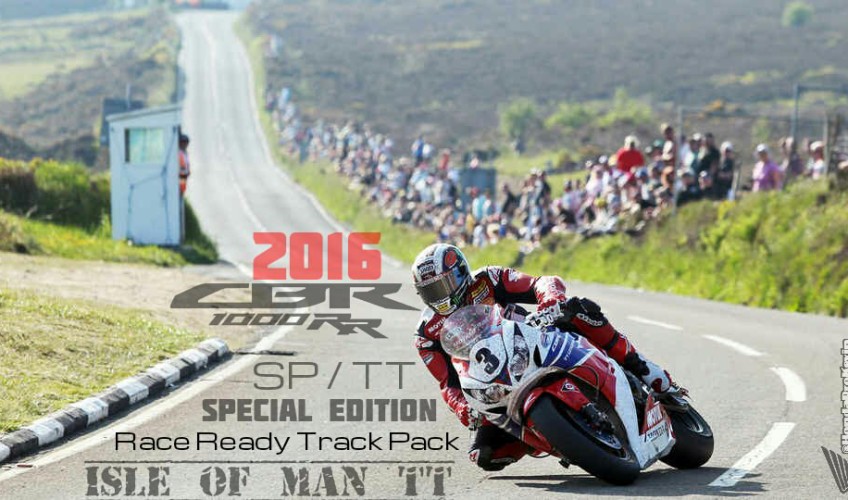 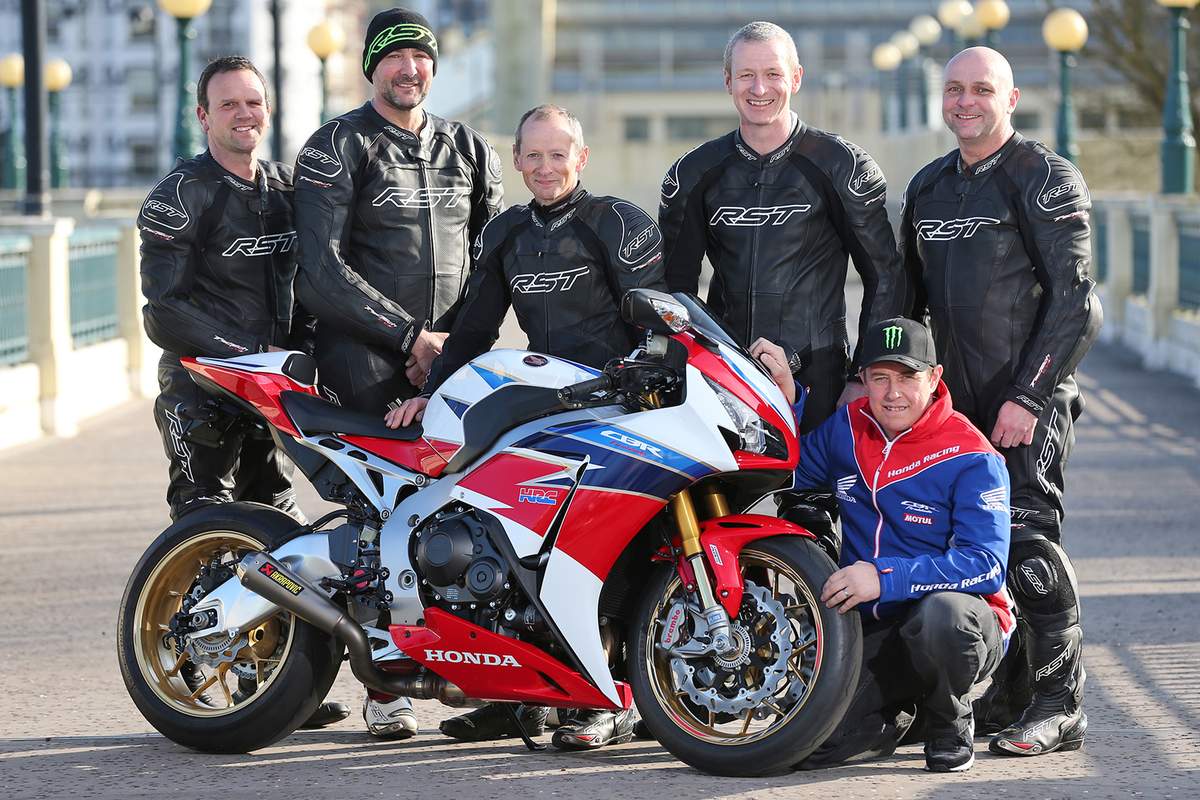 In response to demand from a hard-core Of performance enthusiasts Honda – for the very first time – in 2014 began producing the CBR1000RR Fireblade SP. A track-focused, yet fully street legal, version of the bike that not only looks special – it is special. New for 2016, the CBR1000RR Fireblade ‘TT’ Edition, inspired by John McGuinness’ win at the the Isle of Man TT, comes with a selection of accessories for the track, further improving the look, sound and feel of this special CBR superbike.

You may already be familiar with the SP version of the CBR1000RR but I’ll touch base on a few of the features that come ‘standard’ on the SP that set it apart from your plain-jane 1000RR CBR. The SP chassis wears circuit-ready front and rear Ohlins suspension plus Brembo four-piston mono block calipers, with frame revisions and new top and bottom yokes to suit. Honda’s electronic Combined Anti-lock Brake System comes as standard, with software remapped appropriately. Pirelli Diablo Supercorsa SP tires are the finishing touch.

The 999.8cc inline four-cylinder engine gets the same updated cylinder head as the standard 2014 CBR1000RR Fireblade, with improved inlet/exhaust gas flow and combustion efficiency, and the extra 3 HP (2kW) peak horsepower boost. However it features factory-matched pistons and connecting rods, to ensure optimum internal balance. As a track-focused machine there’s no provision for a pillion and a sleek single seat unit saves weight. Further marking the SP version out from standard is its own unique Tri-Color paint – white and two-tone blue, with a central red stripe and trademark Honda gold wheels.

The CBR1000RR SP uses a new ‘wave’ design ignition key; it offers improved security and its compact size greatly reduces the chance of breakage. Also new is the fuel tank cap – it uses an improved breather design for better venting. Instrumentation is a multi-function LCD with a cockpit display dominated by the digital bar-type linear tachometer that scrolls left to right as engine speed increases. Beneath this are the main numerical readouts: gear position, coolant temperature, speedometer, clock / lap time, trip / fuel efficiency / fuel consumption and odometer / tachometer. At the bottom of the display are lights for headlight high beam, neutral and indicators. 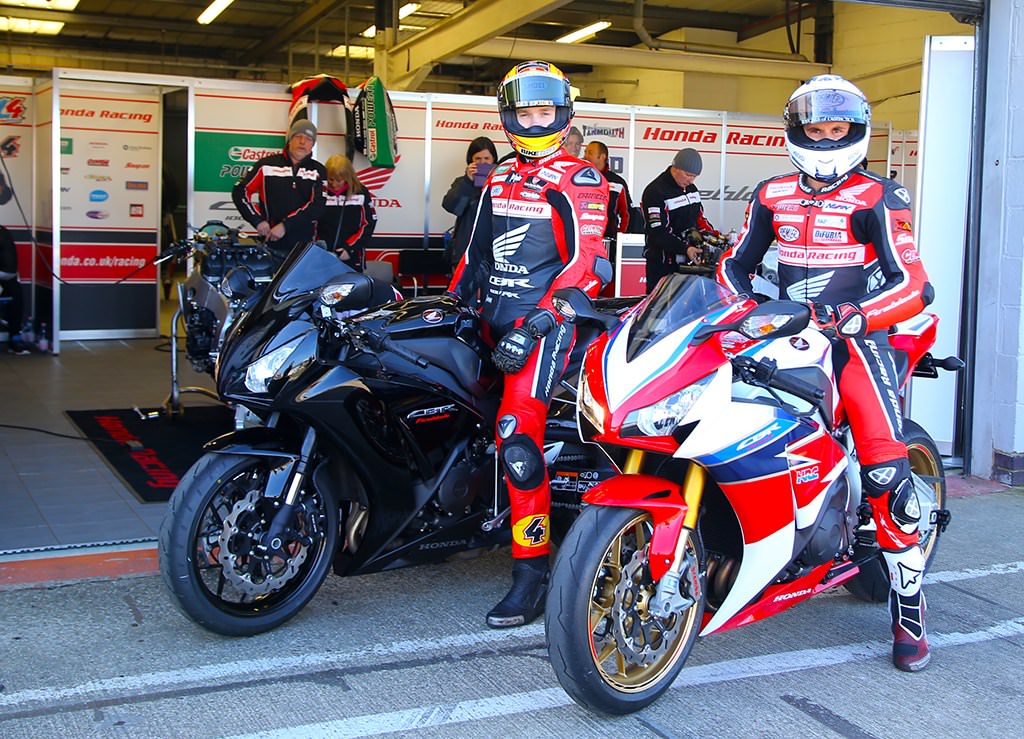 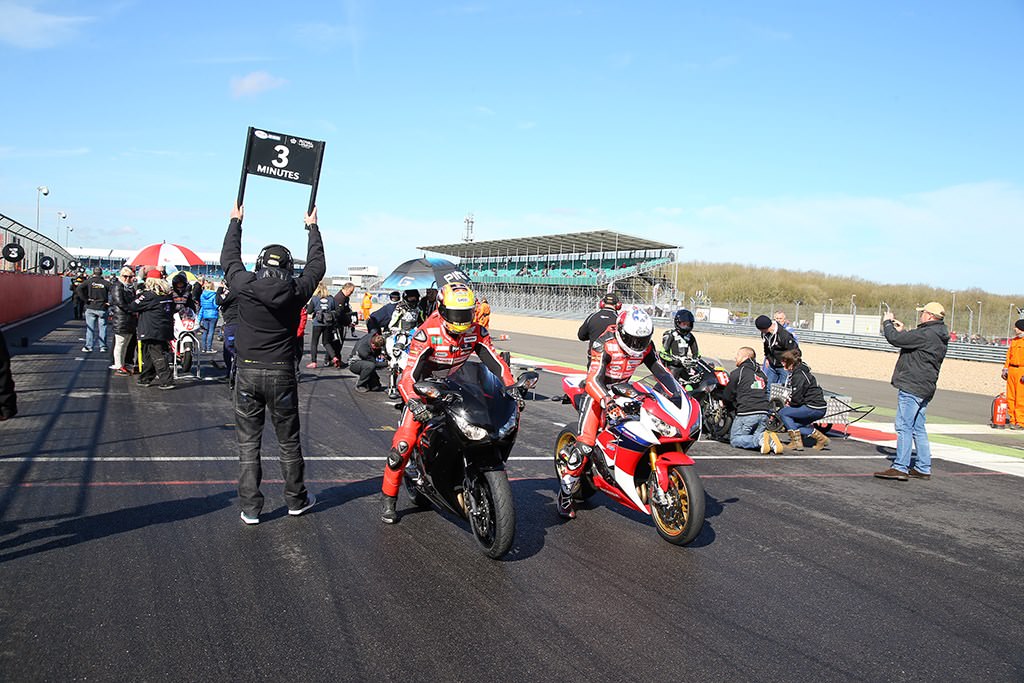 Now, let’s get to the good stuff… What sets the ‘Guinness’ TT Special Edition CBR1000RR apart from the standard SP version of the CBR1000RR Fireblade that you’re already familiar with? Here’s a breakdown of the aftermarket performance parts Honda decided to throw on this “Race Ready Track Package” as well as some of their own Honda Genuine Accessories… 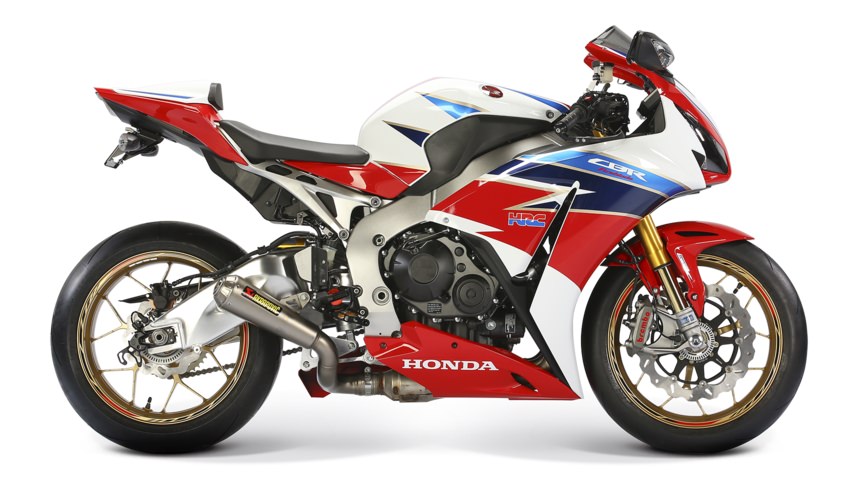 New for 2016, the CBR Fireblade ‘TT’ Edition, inspired by John McGuinness’ win at the the Isle of Man TT, will come fitted with the following accessories: 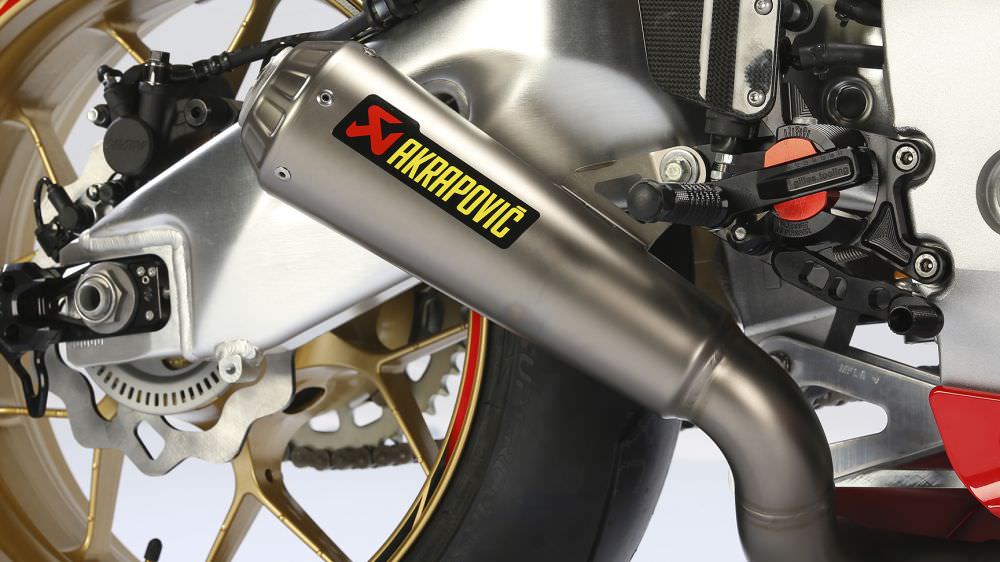 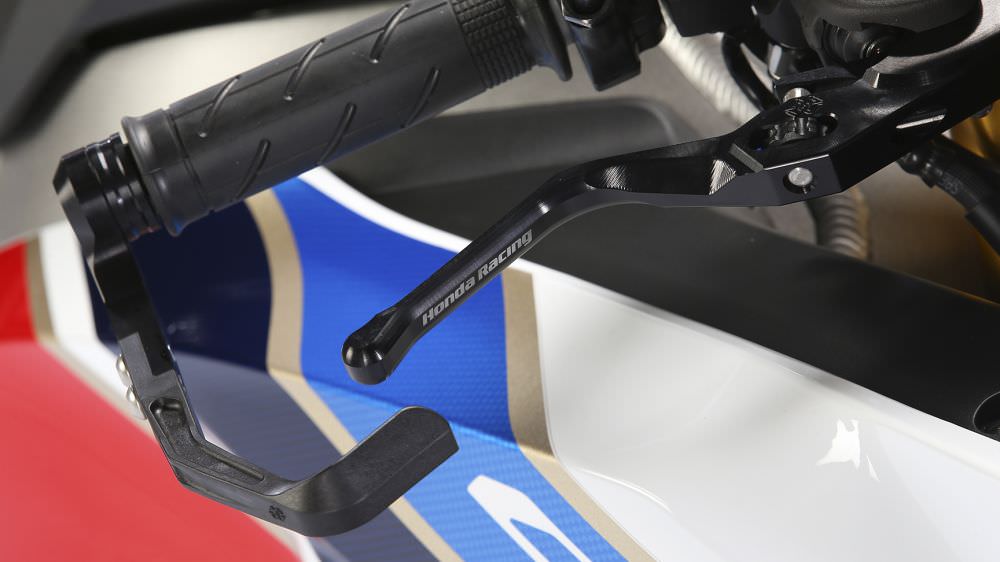 Comes as standard with the race pack. 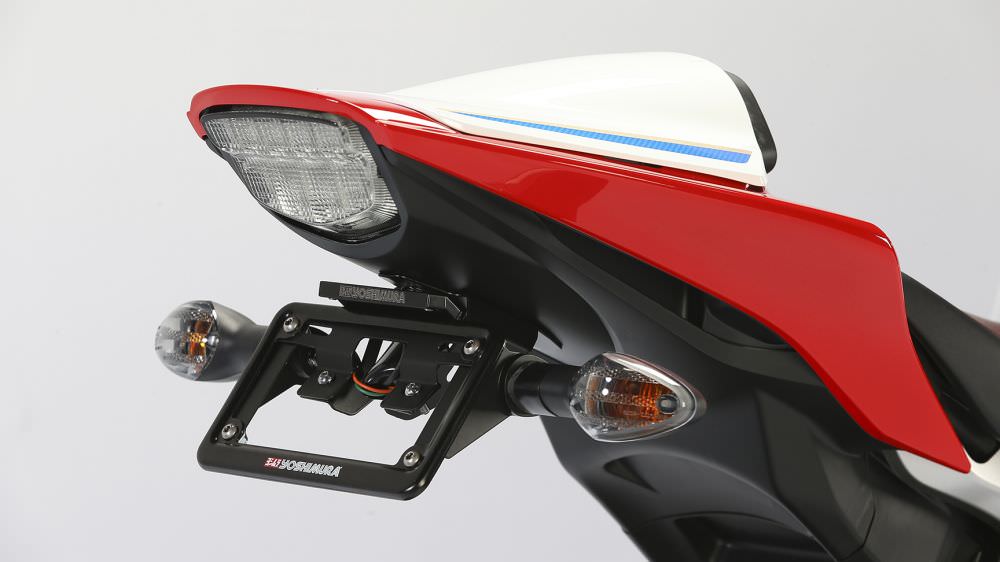 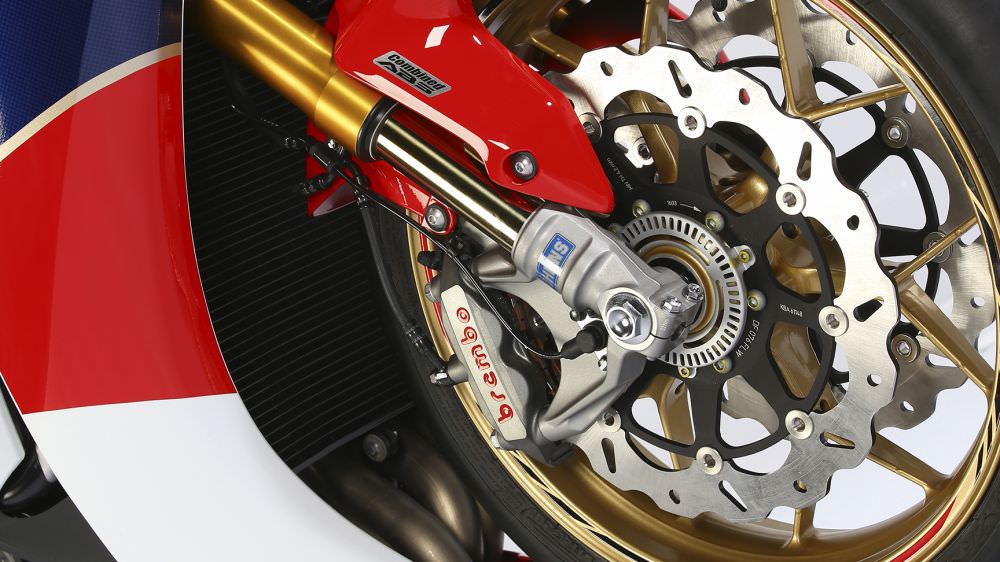 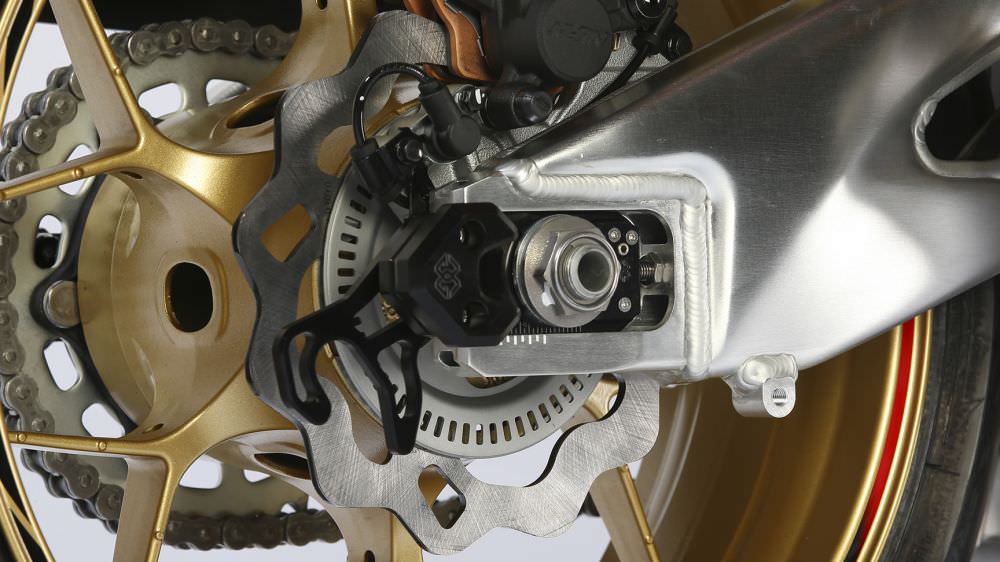 The CBR1000RR SP is and has been since its introduction in 2014, an extremely limited production bike. Honda is keeping this new for 2016 version, the CBR1000RR SP TT, at an even lower production rate so you won’t see many of these floating around. Want to buy the baddest CBR1000RR Fireblade Honda has ever built? Want to buy it in the USA? Sorry… You’re out of luck as Honda is not bringing it to the USA so if you’re lucky enough to be in a country that has this model available, if you’re even remotely considering the idea of purchasing one – I’d hop on it ASAP.

So… Now that you’ve seen, technically, the baddest CBR Honda has ever built for the street. What’s your opinion on these additions to the 2016 CBR1000RR SP Fireblade? I wish they’d give us in the USA a chance at special edition CBR models like this… Sadly, we’ve never had our chance to purchase models like these. The only special edition version we’ve ever been able to get our hands on is the ‘standard’ SP model.

With all of this talk about how bad this 2016 CBR1000RR SP TT McGuinness Special Edition is… Let’s take a flashback in time and remember where it all started with this cool old school picture. This is Mike Hailwood, winning the 1966 world title on the Honda RC166 race bike. 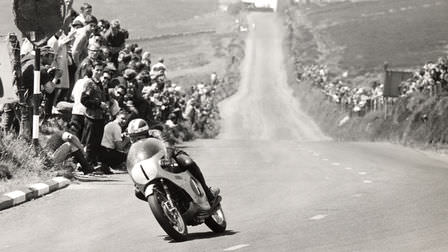 * Some confuse the name of Fireblade as a different ‘model’ when compared to the 1000cc CBR1000RR. So there’s no confusion, the CBR1000RR and Fireblade are one in the same. Honda uses the model name Fireblade in many countries across the world but does not use the Fireblade name in the USA. Instead, it’s just called CBR1000RR for us on this side of the pond.