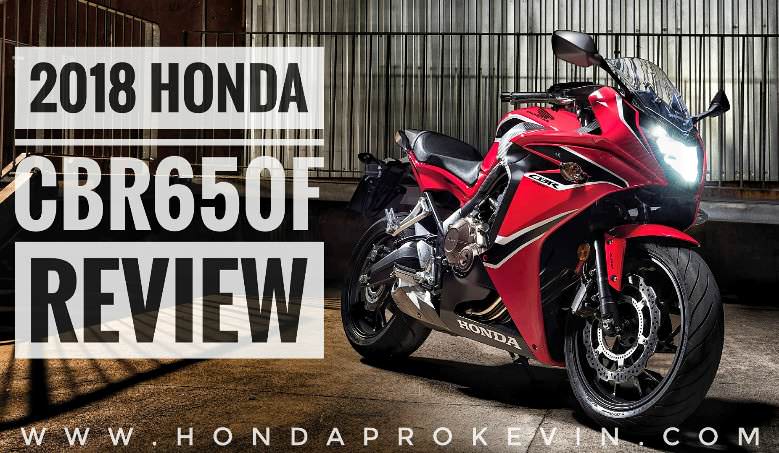 * This review is for the USA spec 2018 CBR650F. Color options and select specifications will vary by country. 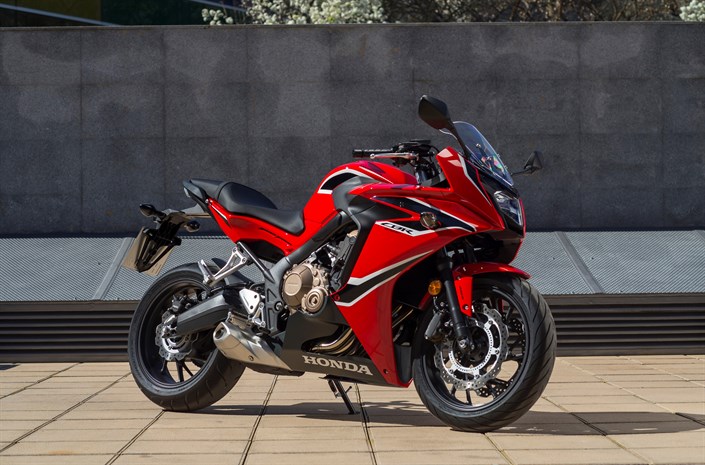 2018 CBR650F Changes VS 2016 CBR650F: Why am I saying 2018 CBR650F versus 2016 CBR650F changes? Refer to the paragraph above… Honda’s four-cylinder CBR-F middleweight gains 4 peak horsepower. How did they squeeze more horsepower out of the 2018 650cc CBR? Honda attacked the intake stacks and muffler for the exhaust which not only gave it a bump in power but also added a touch more sound to what was a pretty quiet bike when you rolled on the throttle. Plus the CBR650F now sports a Showa Dual Bending Valve front fork setup that has better damping action for more comfort and smoother transitions over those imperfect road conditions and revised Nissin brake calipers. Honda also decided it was time to make the lighting stand-out a bit more and threw LED bulbs in place of the ‘old-school’ halogen setup. Redrawn bodywork highlights the engine and gives it a slightly more aggressive ‘look’ to it as it was lacking in comparison to the styling Honda has thrown at the 2017 CBR1000RR, CBR500R and CBR250RR for example. The gear ratios were tweaked to help with that extra horsepower to give you a nice bump in overall acceleration feel. Rounding out the changes are L-shaped air valves on the wheels to simplify air-pressure adjustment. 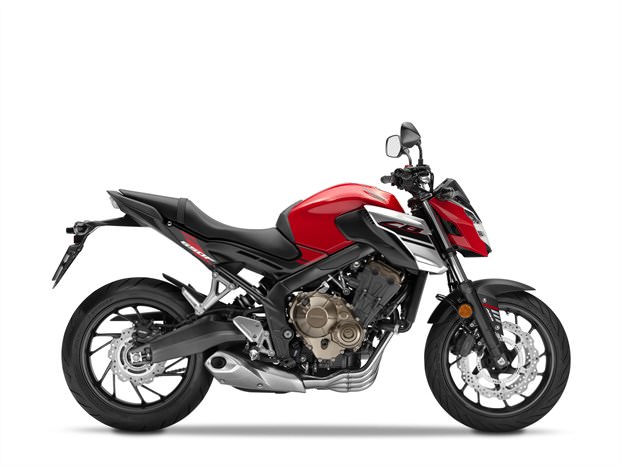 Are these changes to the 2018 CBR650F massive and a game-changer? Nope. It’s not a complete model change-up to where everything little thing was tweaked like we saw for 2017 on the CBR1000RR. The CBR650F has lived a short lifespan so far and Honda would almost be crazy to sink the money in R&D to completely revamp this model when it’s only going into its 3rd production year. These slight changes do make the bike even better than before and that’s a bonus as Honda could’ve left it alone. You can check out my CBR650F Ride Review here if you’re curious on my opinions of the bike. Enough rambling though, let’s get to what you’re here for…

A four-cylinder middleweight provides accessible and enjoyable engine performance tied to minimal mass and, for many riders, is a great place from which to begin – or resume – a motorcycling career. Affordable to both purchase and run, they’re small on costs but big on excitement – a great combination. Honda has always had a strong tradition of creating such motorcycles – genuine middleweights that pack real pound-for-pound punch.

Designed by a young team of engineers, the faired CBR650F continues this tradition. On its introduction in 2014 alongside the naked CB650F*, it combined day-to-day practicality and ease of use 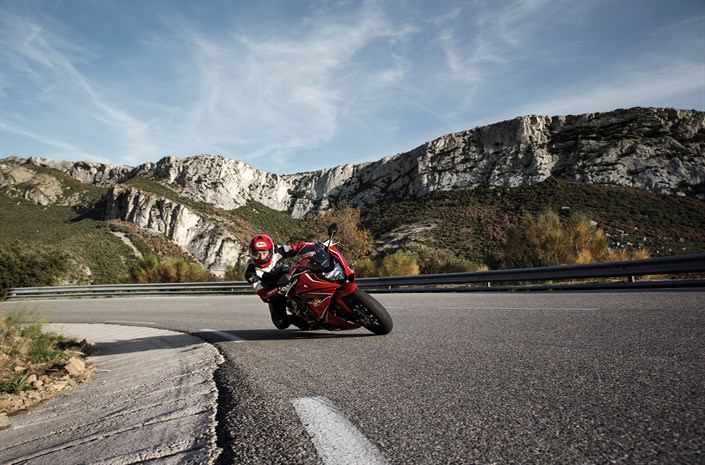 with a strong dose of CBR-specification sporting intent and style. For 2018, the new CBR650F turns up the volume on every level: it’s still an easy machine to live with, but looks sharper, handles better, makes more power and delivers an amplified soundtrack that complements the sharper visual edge.

“The CBR650F has found its place with owners who want sports style and performance without the compromise and expense. Our aim with the new machine was to add extra rider excitement and enjoyment while sacrificing none of the usability. The engine still makes great torque from low rpm, but now hits harder, with more power up top. The latest SDBV fork enhances the chassis and the styling is much more aggressive – more CBR and also something quite unique, with the engine really on show.”

More peak power from revised intake funnels and a new free-breathing exhaust gives the CBR650F a satisfying rush to its 11,000rpm redline, while shorter gear ratios ensure harder acceleration through the mid-range. And with the power upgrade, a new raucous growl emanates from down low and grows to a fast-spinning howl as revs rise.

Its chassis too has been honed with a Showa Dual Bending Valve front fork and revised Nissin front brake calipers. Sharply angled, the CBR650F’s new fairing highlights the engine and accentuates the aggressive, ready-for-action stance, with an overall look and feel redolent of the 2017 CBR1000RR Fireblade. The headlight and taillight are now LED.

For 2018, the CBR650F’s engine has an extra 4 horsepower (3kW) up top, with a 90 HP (67kW) @ 11,000rpm peak power output. The increase ­– which is noticeable from 5,000rpm ­– is due to new intake and exhaust flow management: shorter air intake funnels feed four 32mm throttle bores from a down-flow airbox (which itself draws through larger intake ducts) and in turn the right side-swept 4-1 exhaust now employs a dual-pass internal structure (rather than triple-pass) in the muffler, reducing back pressure. It also features a larger final exit aperture. 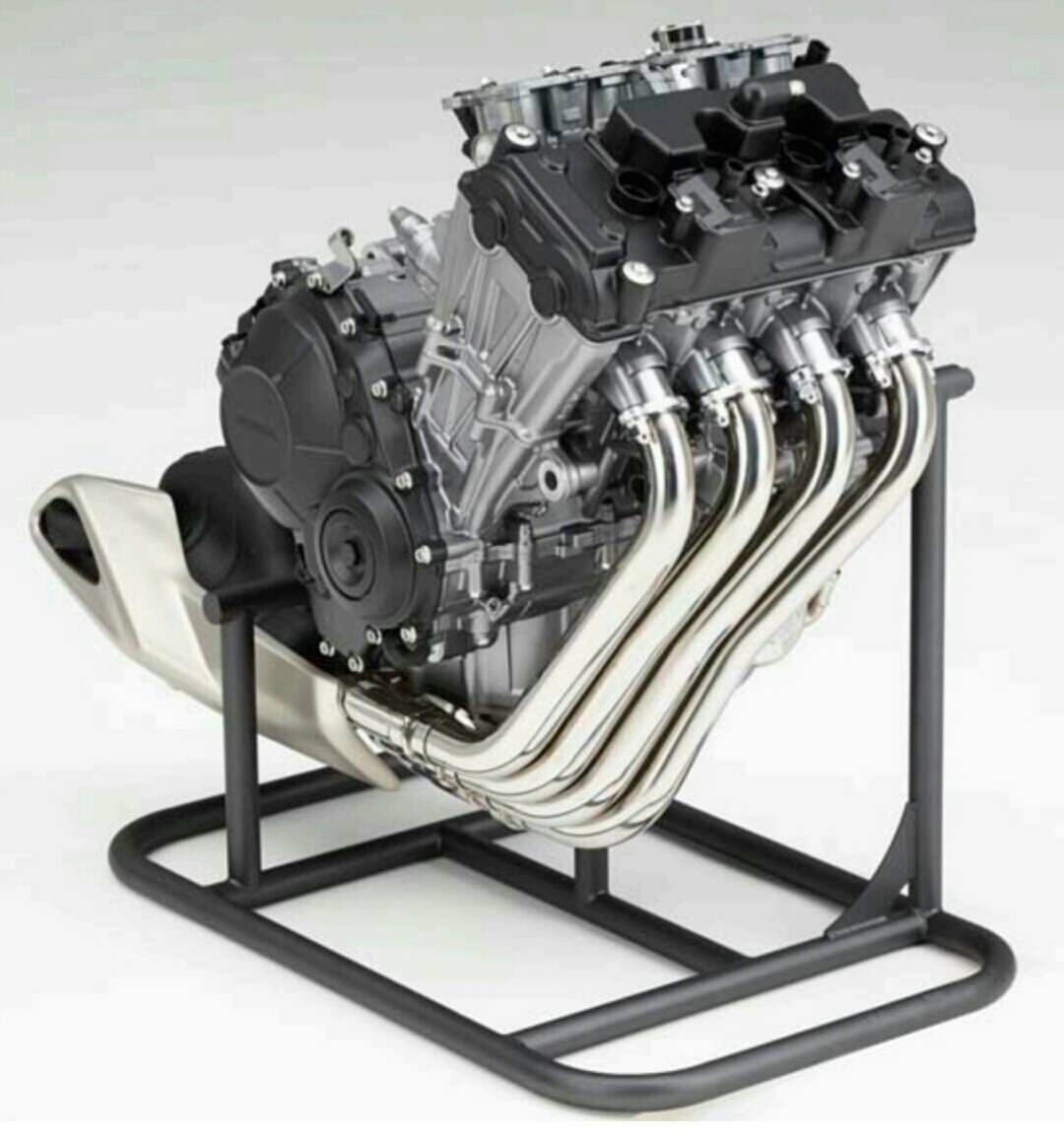 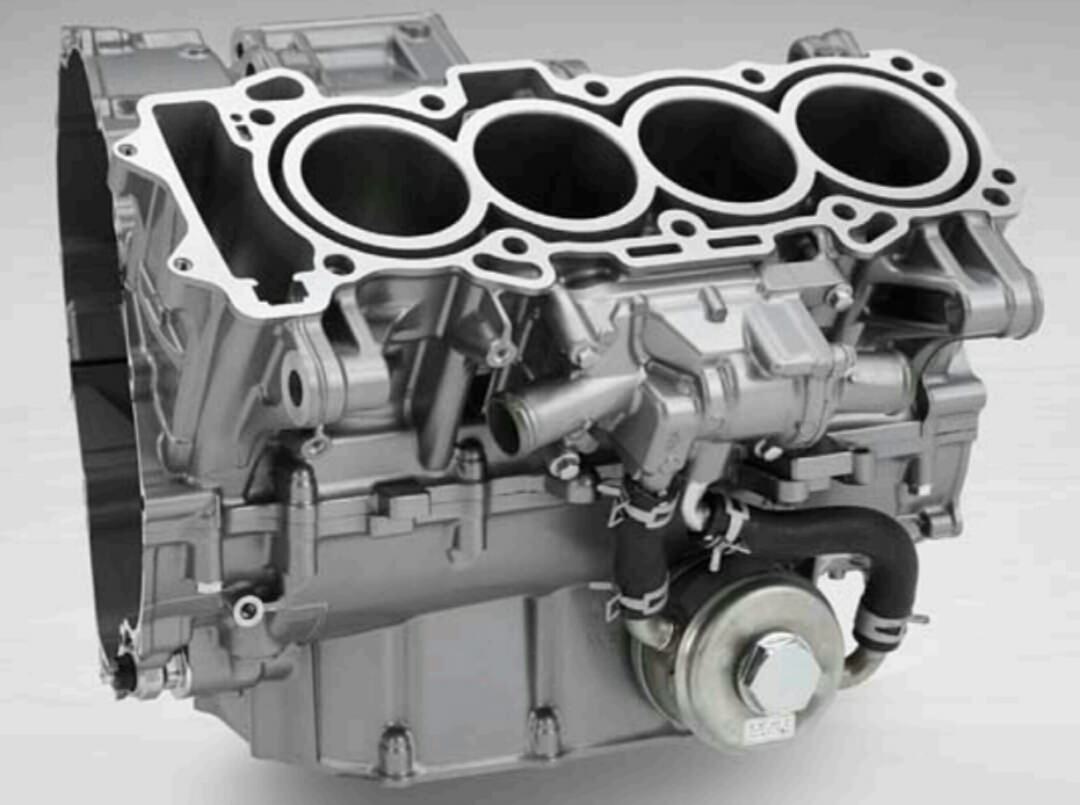 With shorter gear ratios from second through to fifth, the new CBR650F gets away from the line faster than the previous model and from a 37 mph (60km/h) second gear roll-on will pull out 3 bike lengths over 1/4 mile (400m).

Slightly increased peak torque of 47 lb/ft TQ (64Nm) arrives at 8,000rpm, and the engine’s tractability allows it to pull smoothly from idle at 1,500 in sixth gear. Adding an extra layer of aural satisfaction, a throaty induction growl at low-to-mid rpm swaps over to an addictive high-rpm howl reminding the CBR650F rider of Honda’s four-cylinder racing pedigree. 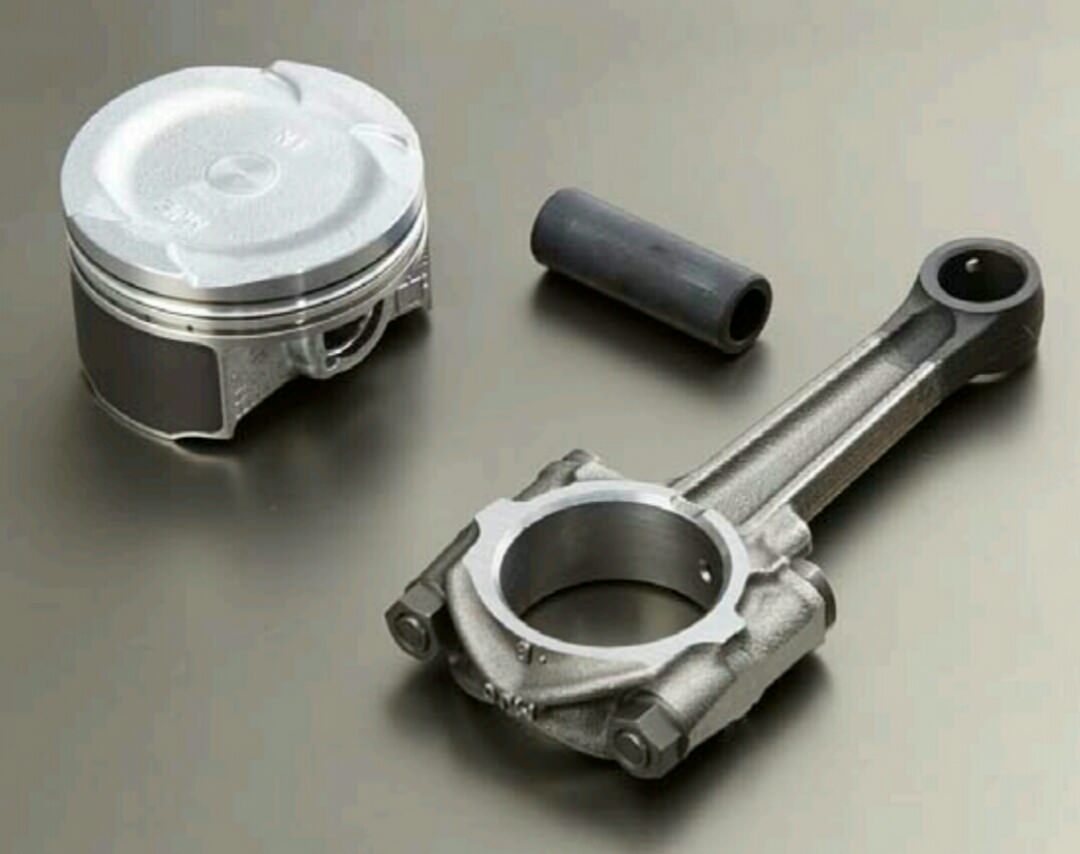 Asymmetric piston skirts minimize bore contact and reduce friction. Ferrous spines on the outer surface of the cylinder sleeves reduce oil consumption (and friction) with improved heat transfer and a silent SV cam chain reduces frictional losses by using a Vanadium coating on its pins. Internal water channeling from cylinder head to cylinders does away with most of the exterior hoses. 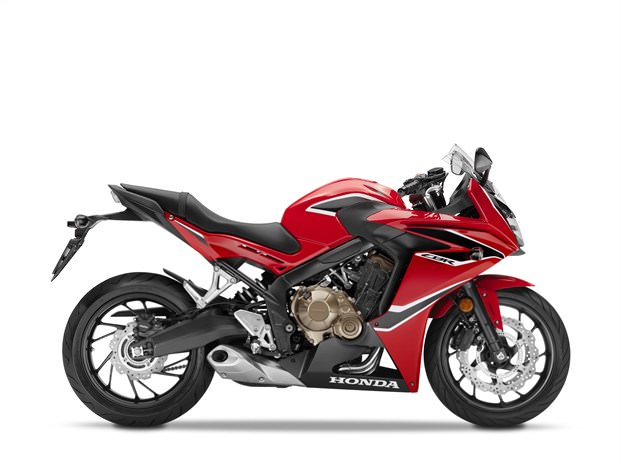 The CBR650F’s steel diamond frame uses twin 64mm x 30mm elliptical spars with a rigidity balance specifically tuned (stiffer around the headstock and more ‘flexible’ in the spar sections) to deliver balanced handling characteristics with high levels of rider feedback. Rake is set at 25.5° with trail of 101mm and wheelbase of 57 in. Curb weight for the 2018 CBR650F comes in at 461 lbs. 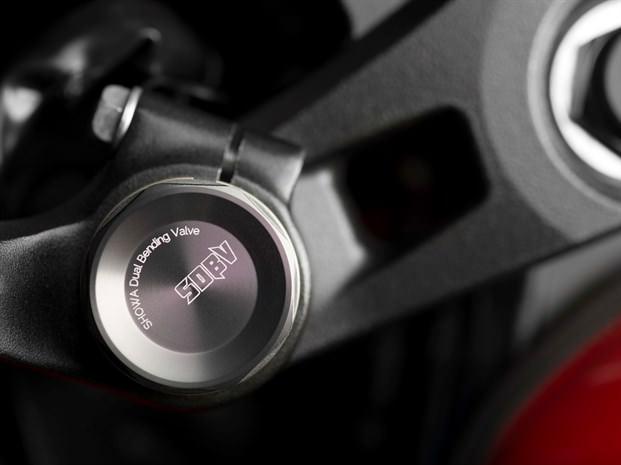 Cast aluminum six-spoke wheels wear 120/70-17 and 180/55-17 front and rear radial Tires and feature L shaped air valves for easier maintenance. Revised two-piston Nissin front calipers work 320mm wavy discs, with a single-piston rear/240mm disc. Two-channel ABS comes ‘standard’ on European-spec CBR650F models but in the USA it is optional so you can get with or without ABS in 2017. 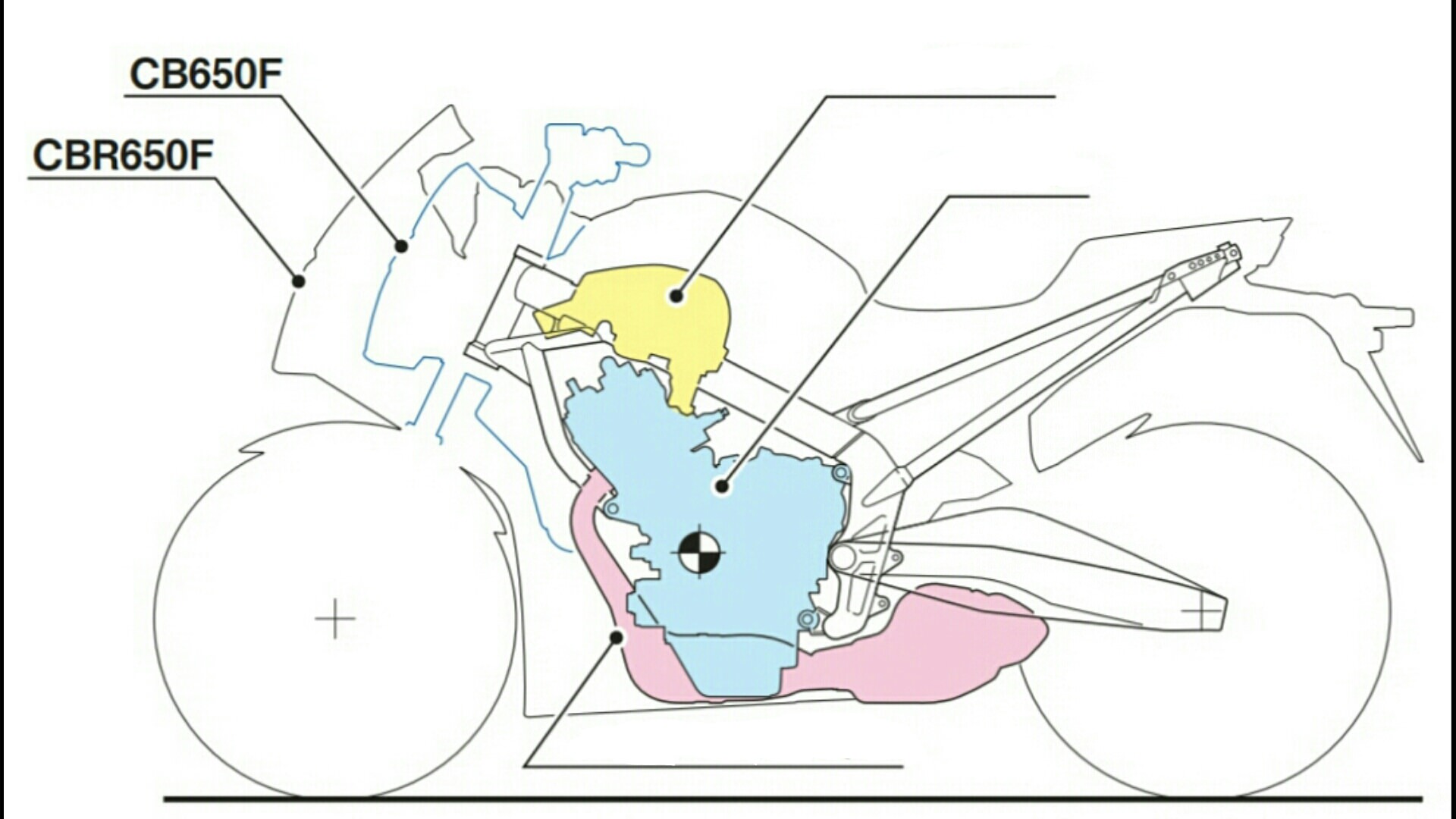 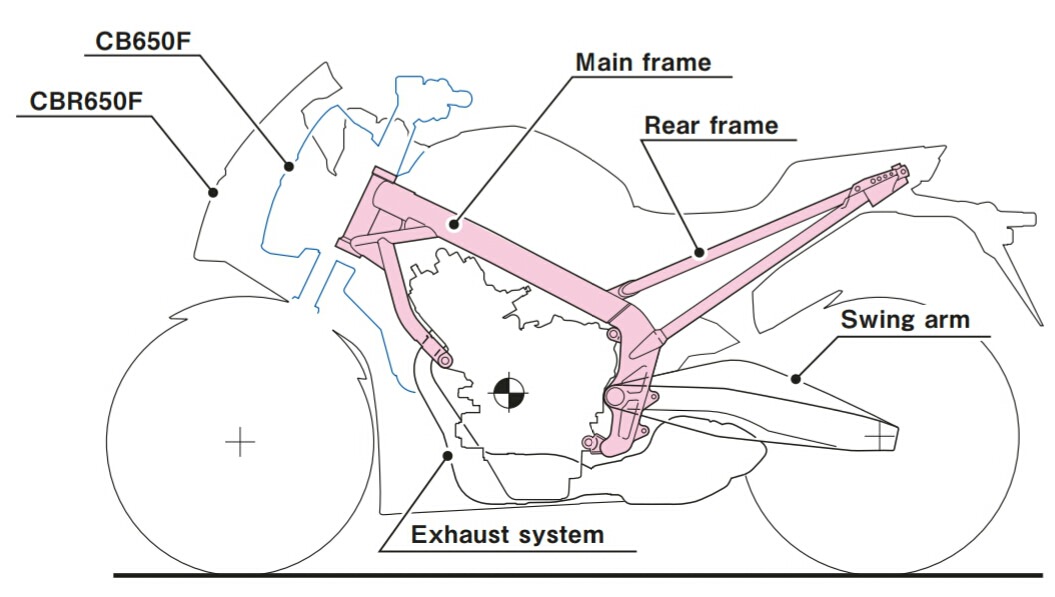 The new front fairing not only adds Super Sport style, but also channels airflow from the high pressure area at the front to the interior airbox intake duct. It also shows off the engine to the maximum – it was designed to be on display after all – and highlights the aggressive Mass Forward stance of the machine.

Minimal sidepanels sharpen up the rear and the clear-lensed LED taillight complements the crisp LED headlight. The seat’s narrow middle profile helps ground reach and it sits on rubber mounts that are carefully shaped (with specific hardness) to minimize vibration. Seat height is 31.9 inches (810mm). 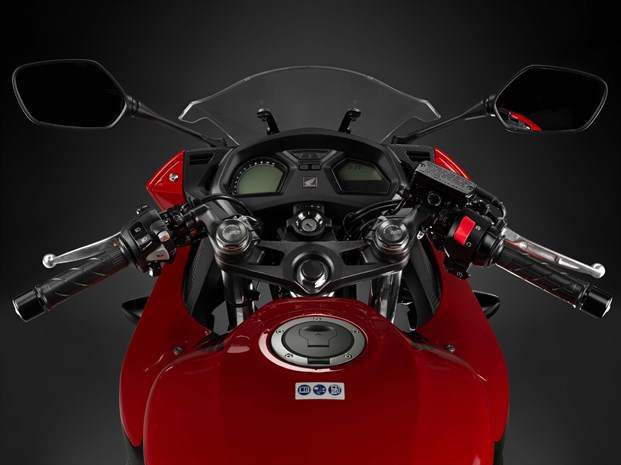 —> As always, I love to hear what you guys think! Do you think Honda hit a homerun on the upgrades and changes to the 2018 CBR650F from the outgoing model? Anything Honda missed that you feel should have been changed on this mid-cycle refresh?

Thanks as always for checking out the site! If you guys found any of the information helpful or useful, please slap that “Like” button and Share – It’s always appreciated!

* All specifications are provisional and subject to change without notice.