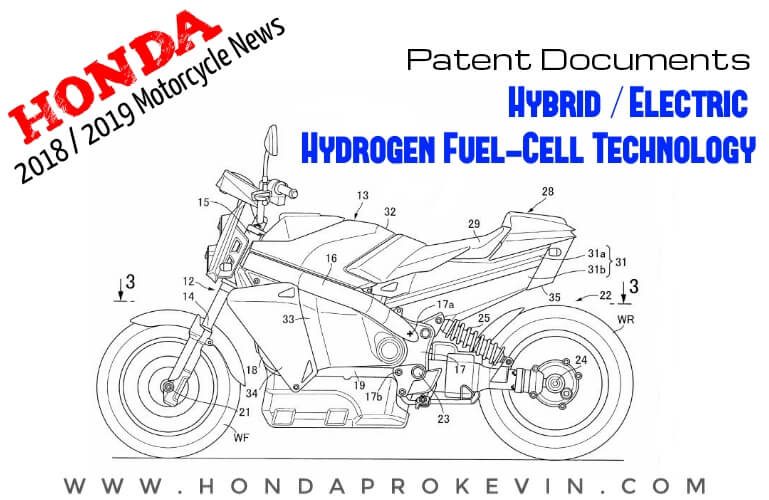 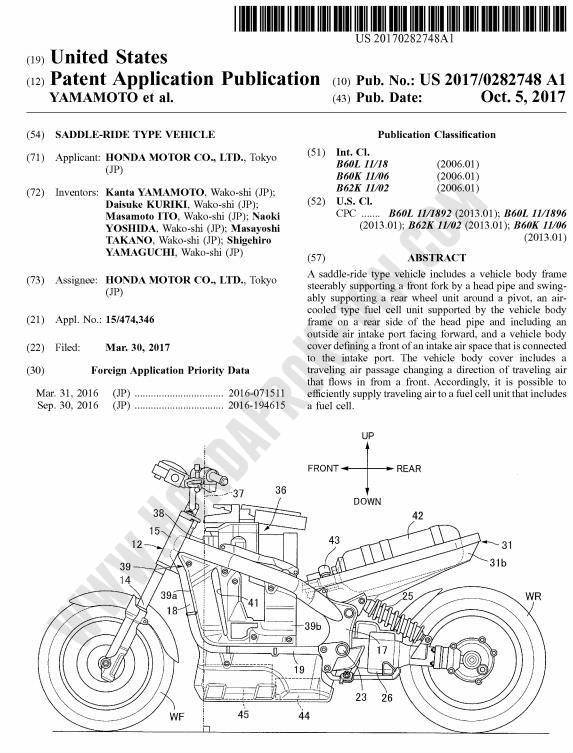 Honda is and has been for many years a firm believer in using hydrogen fuel cell technology and it’s even more evident with this latest round of patent documents filed. When I first stumbled across the patent documents, nothing was stated about the fuel-cell setup, I was baffled and intrigued by the way it looked in the small thumbnail image. I then started looking for an engine and my first thought was that it might be a ‘regular’ electric powered motorcycle patent but nope… After reading further it states that the technology behind this patent is for the hybrid fuel cell technology and using it on a motorcycle in the future. You can buy a new Honda right now with this same technology, not with 2-wheels though as the only offering to the public as far as a production model goes will have 4-wheels, it’s a new car for 2017 from Honda called the Clarity. Honda’s first experiments date back to the mid 2000’s with motorcycles and scooters but what the public knows and hears about it had fizzled off over the last few years. Until now.

How does an electric motorcycle with a hydrogen fuel cell setup work? I’ll try to keep this short as the explanation could be turned into a mini novel .The cell (in a fuel cell) is where electricity is generated by reacting hydrogen and oxygen in the air at the MEA. By stacking multiple cells (making a fuel cell stack), the required amount of electricity can be generated. The fuel cell stack can be made smaller by increasing the output of each cell, allowing the number of cells to be decreased while generating the same amount of electricity. The key to increasing cell output is handling the water generated. In the fuel cell, hydrogen reacts with oxygen, generating water at the MEA’s oxygen pole. Air flow can be improved, leading to more efficient electricity generation, by efficiently removing this generated water. While hydrogen gas is very flammable, it is not burned. Instead, the gas is passed through a fuel cell stack that mixes the pure hydrogen with atmospheric oxygen to generate electric current. The electricity is then used to power the electric motors that would then propel said motorcycle or scooter.

We’re only days away from the 2017 Tokyo Motor Show and weeks away from the EICMA 2017 Show too, who knows… Maybe Honda will have a concept bike with this hybrid fuel cell technology on display to test the waters and see how the public accepts it etc. While we’re on the topic of those motorcycle shows and what will be on display or unveiled as far as new motorcycles, check out the new Honda Neo Sports Cafe bike by Clicking Here that I just posted the Sneak Peek video on a couple of hours ago. Oh and one more too, check out the 2018 Gold Wing DCT / F6B Pictures by Clicking Here that were leaked and ruined the big unveiling it was supposed to have surprising everyone at the Tokyo Motor Show on 10/24/2017. If you enjoy checking out motorcycle patents and what might be in store for the future from Honda, I just posted up patent documents yesterday of a Supercharged Honda Motorcycle that you can check out by Clicking Here.

Opinions? | What do you guys think about hydrogen / electricity and motorcycles working in harmony together? Would you be more inclined to buy a setup like this over a ‘regular’ electric motorcycle that you have to plug in you wall to charge up? Aside from the technology that’s crammed into the bike below, what do you think about the styling of it? Of course we can’t tell a whole lot due to the pictures just being drawings without any color etc but you can still get a pretty good idea of what it’ll look like in the grand scheme of things.